Drama on Rugby Street. On Friday, I got a message from the shop that sink holes were opening up in the street. What?!

I think I’d vaguely been aware that re-surfacing works had been planned. They were due to happen, starting on Friday, for a couple of days.  We were even rather looking forward to having some smart new tarmac about the place.

The road-scraping lorry turned up and scraped off the top of the road, ready for the asphalt lorry to come and deliver a massive load of new tarmac to put over the top.

But as it was delivering, something went wrong. The road gave way, and the lorry sank into the ground, somewhere between Maggie’s shop and our other neighbours Thornback & Peel.

The driver quickly took action and pulled out of the collapsing highway.  He re-parked the truck outside Cigala, London’s best tapas restaurant, thanking his lucky stars… and then the road really gave way. The back of the lorry disappeared into the road.

The fact is, it seems there’s a series of massive cavities under the whole street. Or should that be the hole street?

Here’s a photo Maggie sent me earlier. These are the guys outside her place.  I will try and post a photo of the Cigala hole soon. 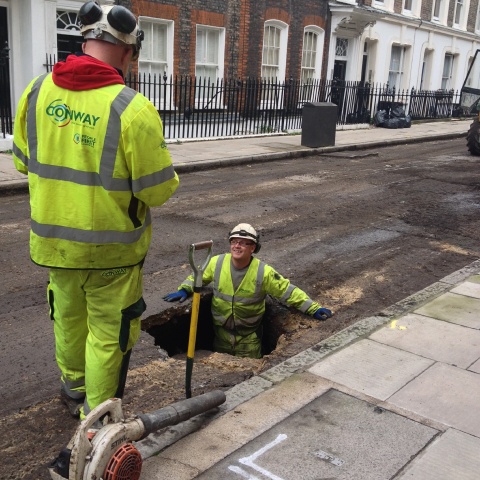 … but can I confess, I’m obsessed about sinkholes.  There’s something so… I don’t know…. elemental about what is going on here. I can spend hours surfing you tube for films of chinese ladies disappearing down sinkholes.  This is one of my favourites.

Back to Rugby Street. I got back from Suffolk this afternoon and this is what I found.

The bit under the plastic sheet is where the lorry went under.

I should say the parking is suspended. 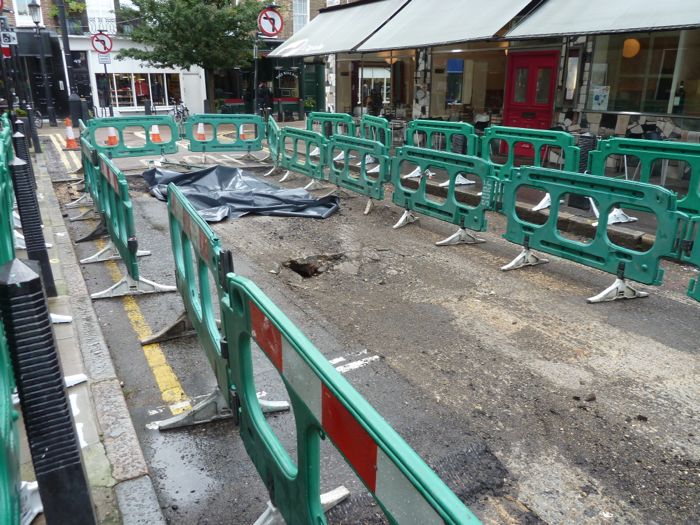 Okay, I admit, it’s not quite Guatemala City out there. But I’m still very excited by collapsing roads.

As I looked, I began to reflect a little on the nature of time and the city. 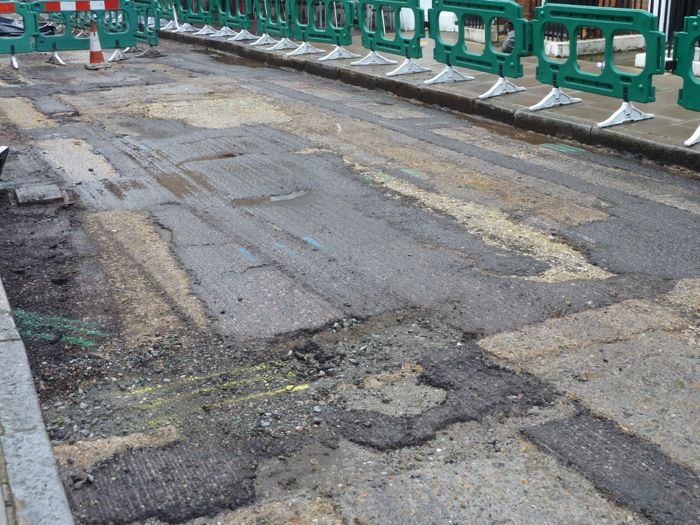 …thinking about what is just beneath the surface. 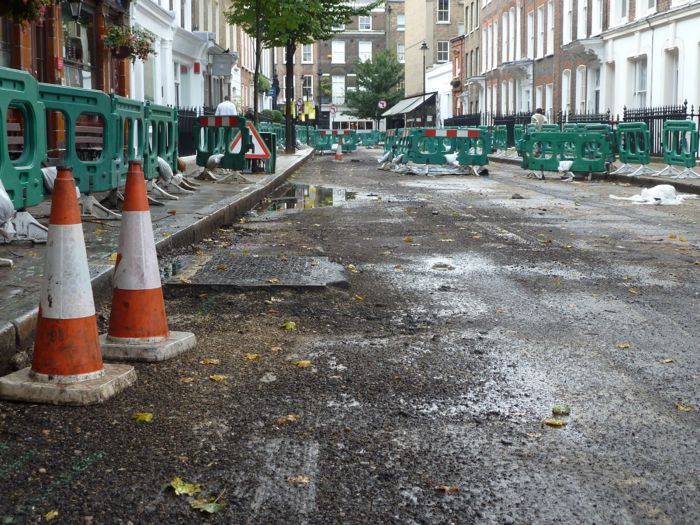 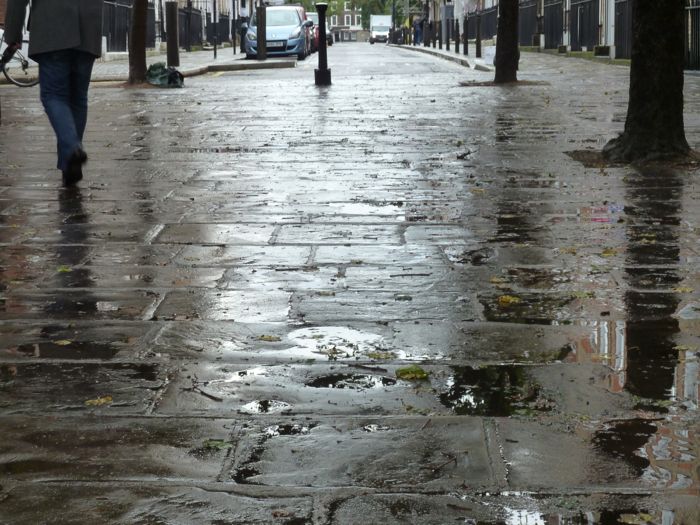 What are we all walking on? 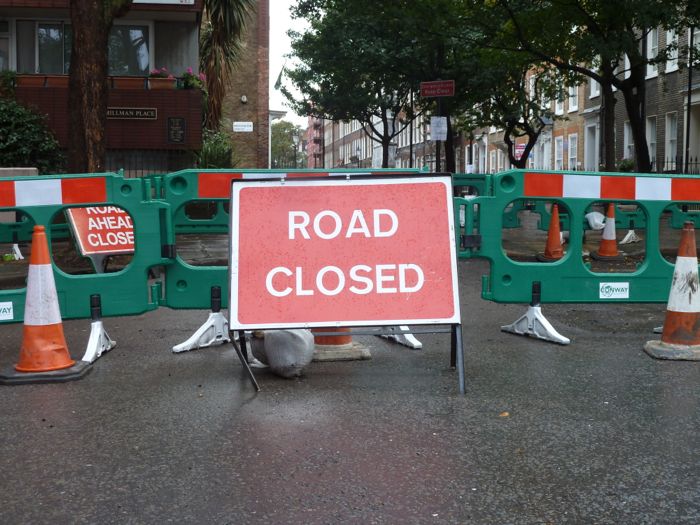 I should say so.

Directly across the road from us are these beautiful early Georgian houses, built in about 1710. What have these walls witnessed in 300 years?

On Wednesday, we have the opening, in our shop, of our neighbour Bobby Williams’s fantastic photographic exhibition telling the history of 18 Rugby Street, once the home of Ted Hughes and Sylvia Plath. Please come and visit.  All are welcome.  You see what I mean about scraping the surface.

Here’s the poster (photographed in Maggie’s shop – our shutters are up on a Sunday. Sorry you can see my reflection!).

I turned the corner in to Great Ormond Street.

Home of the world famous Great Ormond Street Hospital for Sick Children. The building above is part of the 1950s extension. In the office, I’ve got a rather wonderful book, at the end of which is some photographs of what used to stand on this site. 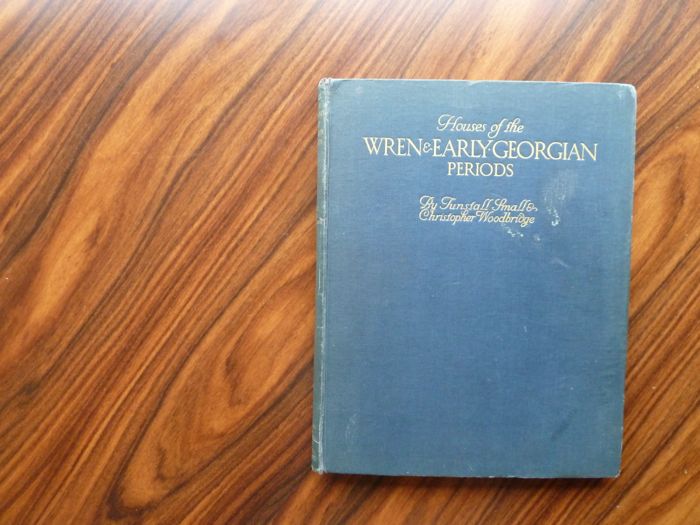 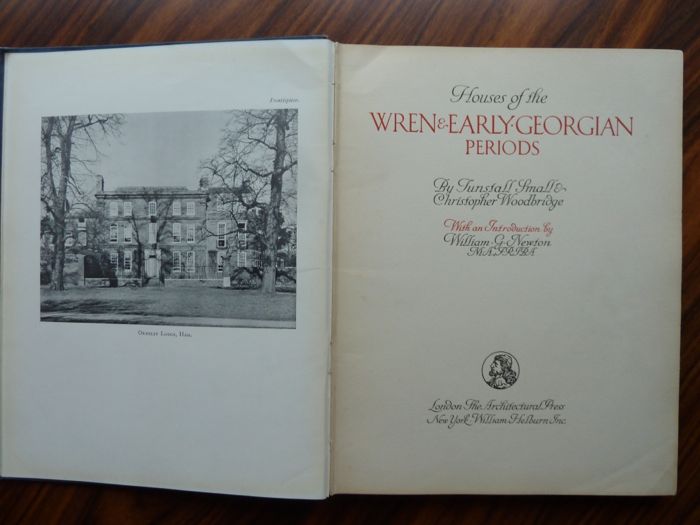 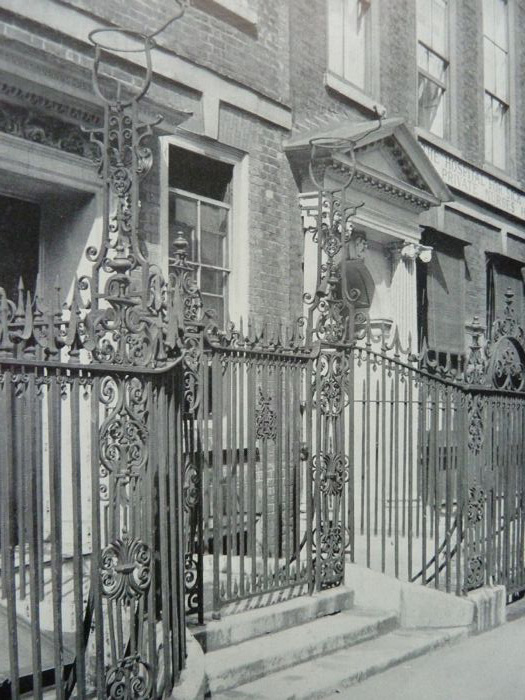 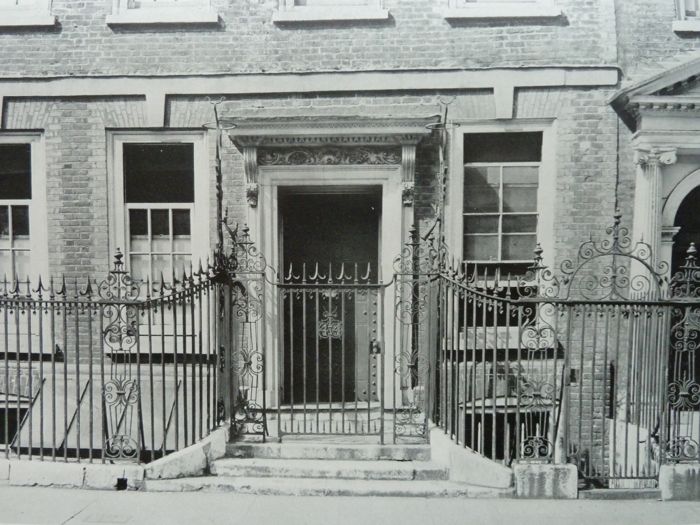 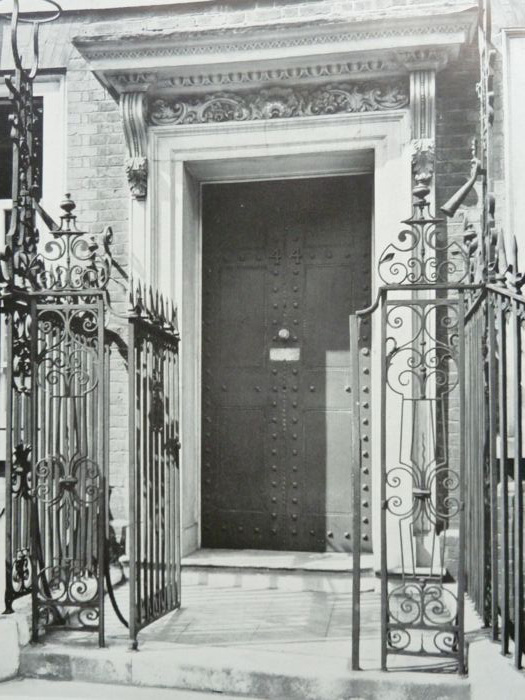 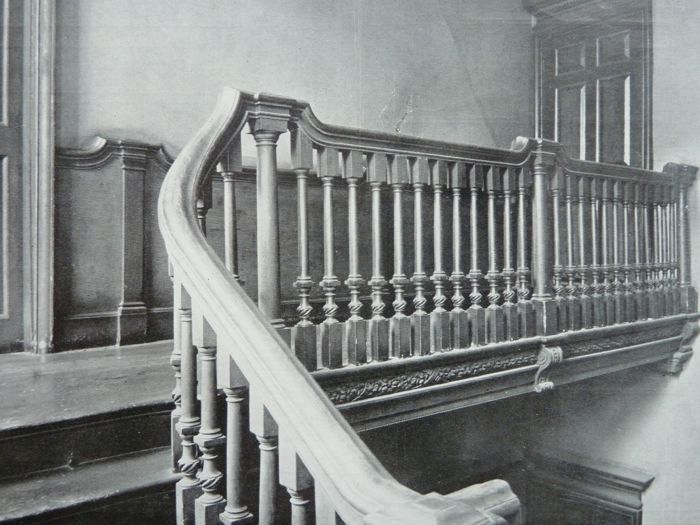 44 Great Ormond Street survived the war, and was demolished in the 50s to make way for the hospital expansion.  But the staircase isn’t entirely forgotten. I have recently incorporated some of these specific architectural details, which had been carefully measured in the book, into a new house I am building in the Chilterns.  Its memory lives on.

If you have a look at the Roque Map hanging on the wall of my flat, you can see the houses on the north side of Great Ormond Street… 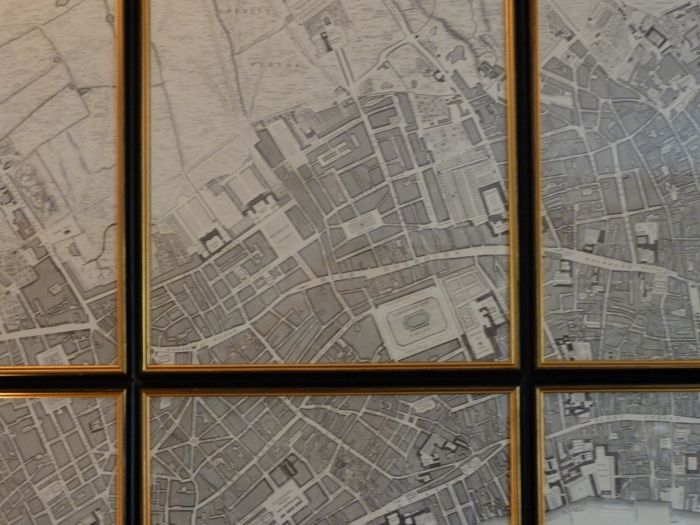 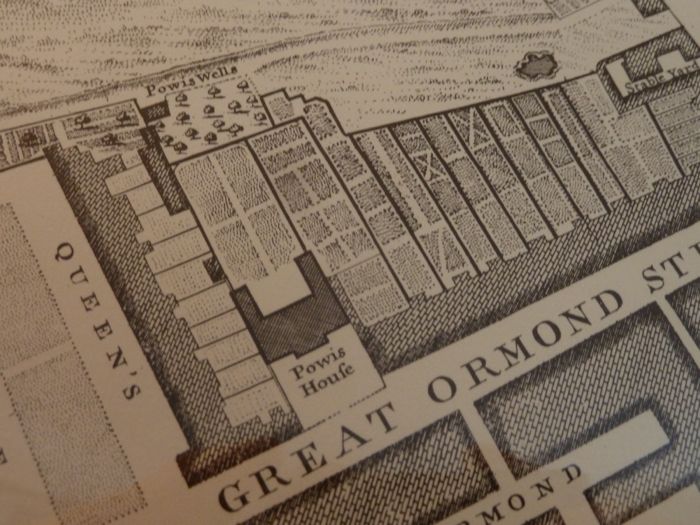 …. with their beautiful, deep gardens, that to the north gave way to open fields and countryside. For 100 years, as London spread west, this remained the edge of the metropolis, which is a fact that – living on Lambs Conduit Street and now Queen Square, as I have done, for 10 years – I find remarkable.

Just to the west of those aristocratic, grand houses, is Powis House, built in the 1690s for the 2nd Marquess of Powis. It became the French Embassy. On 26 January 1713 it burned to the ground (blamed, we are told, by Jonathan Swift, on ‘the carelessness of the rascally French servants’). Rebuilt the next year, here is an engraving of the facade, from a brilliant little book I’ve got published by the Camden History Society: 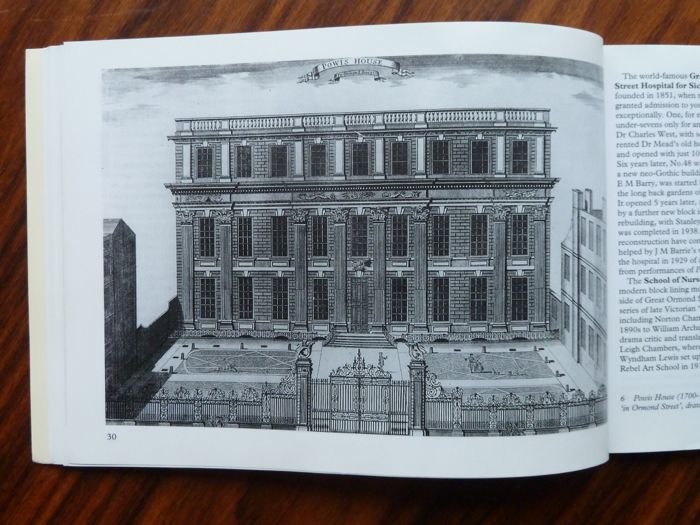 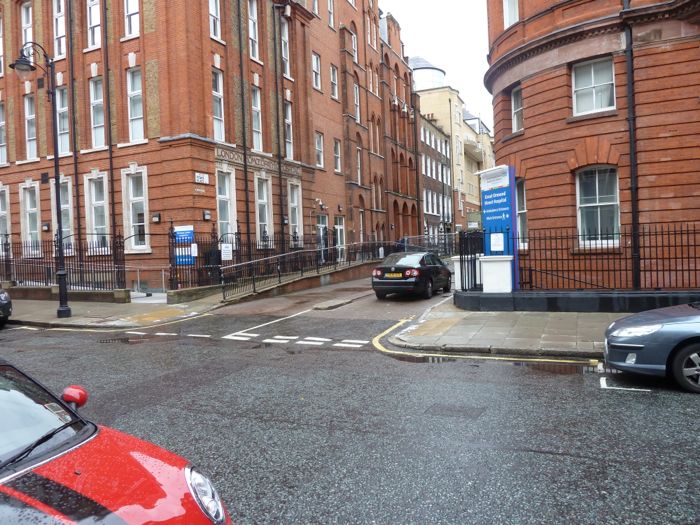 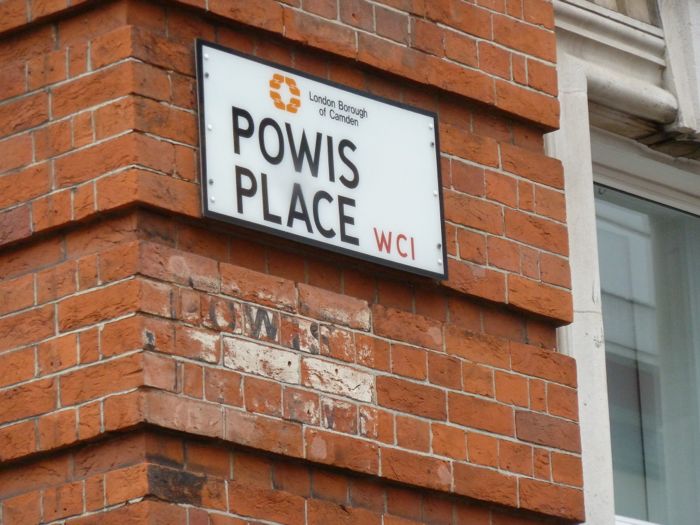 I love the shadow of the old street sign. This is the site of Powis House. 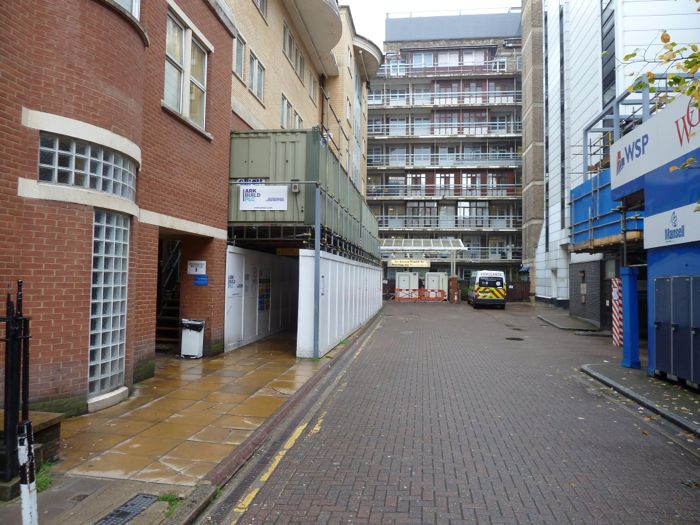 There is something magical for me, despite everything, in looking back at the old early Georgian houses that still line the southern side of Great Ormond Street. 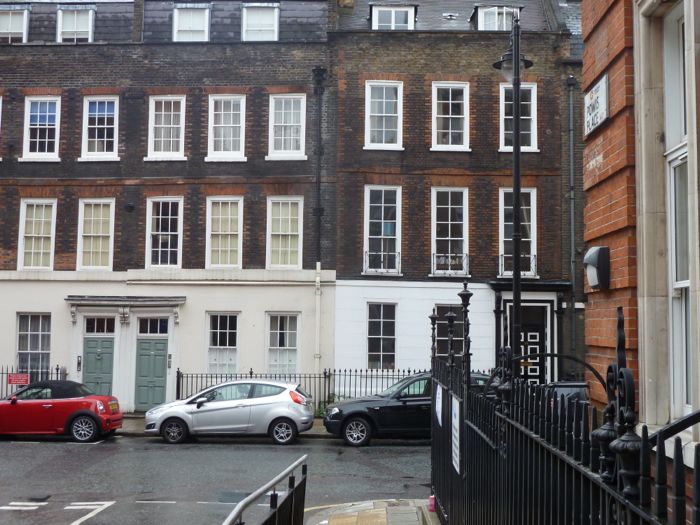 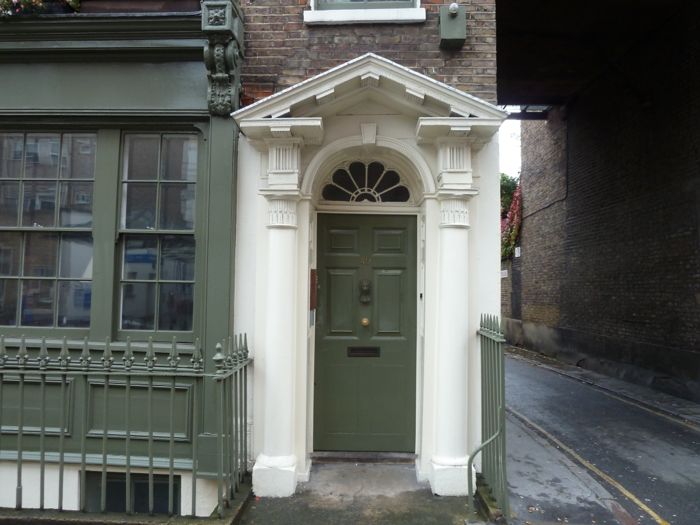 I love London. I love what’s survived, I cherish what’s gone, and I’m interested why. And I’m fascinated by what’s replaced it.  It’s an amazing, unpredictable game when you start scraping the surface.

And as for the sink holes? I suspect we’ll be enduring road construction for some little time to come. I will ask Bridie to institute a special sale with immediate effect: 20% off all kitchen sink accessories (until the works are complete). Please come and visit us all soon.  I rather have the feeling that for the next few weeks: Rugby Street needs you!