There’s a box on my street

If you know me well, you’ll know that one of my favourite films of all time is the movie Brazil, Terry Gilliam’s incredible essay on a dystopian, bureaucratic future which from time to time makes one entirely give up hope. I remember vividly an incredible evening at the Art Workers Guild, a few years ago now, when the Master, Assheton Gorton, had asked his friend Terry to give a talk to the Guild. The room was packed; the evening was electric. We were in the presence of a wonderful, happy, zany genius. And I think Brazil is his finest film. 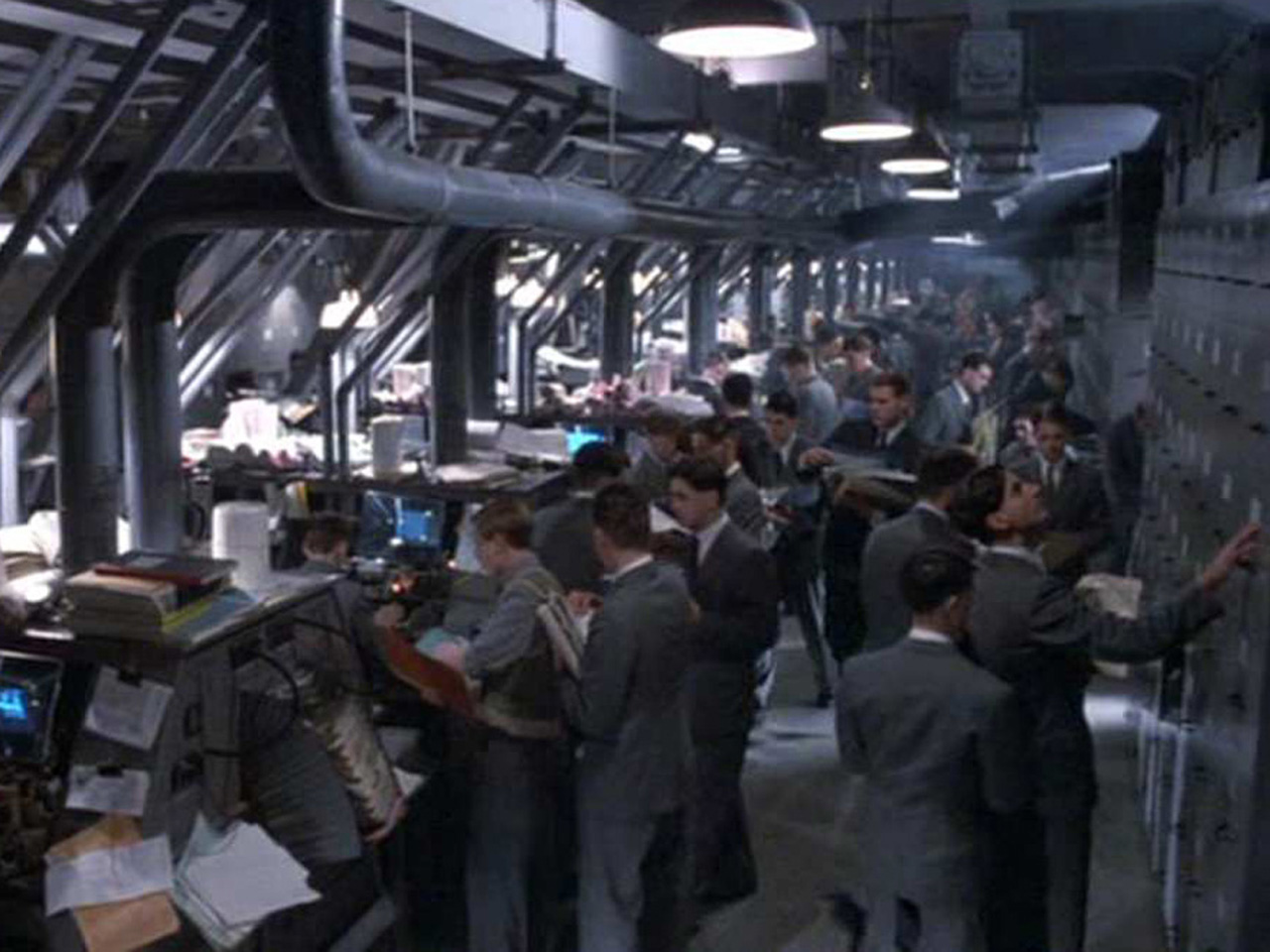 This is the interior of the opening scene… a magnificent, huge, strange office, filled with men in suits busily doing absolutely nothing at all.

You can find the video here… worth a two minute detour.

You see what I mean? Brilliant.  And hasn’t that tune given a kick to your Monday morning?Well, we’ve been in our very own little world of Brazil this week over on Rugby Street.  On Tuesday morning, this turned up outside the shop. 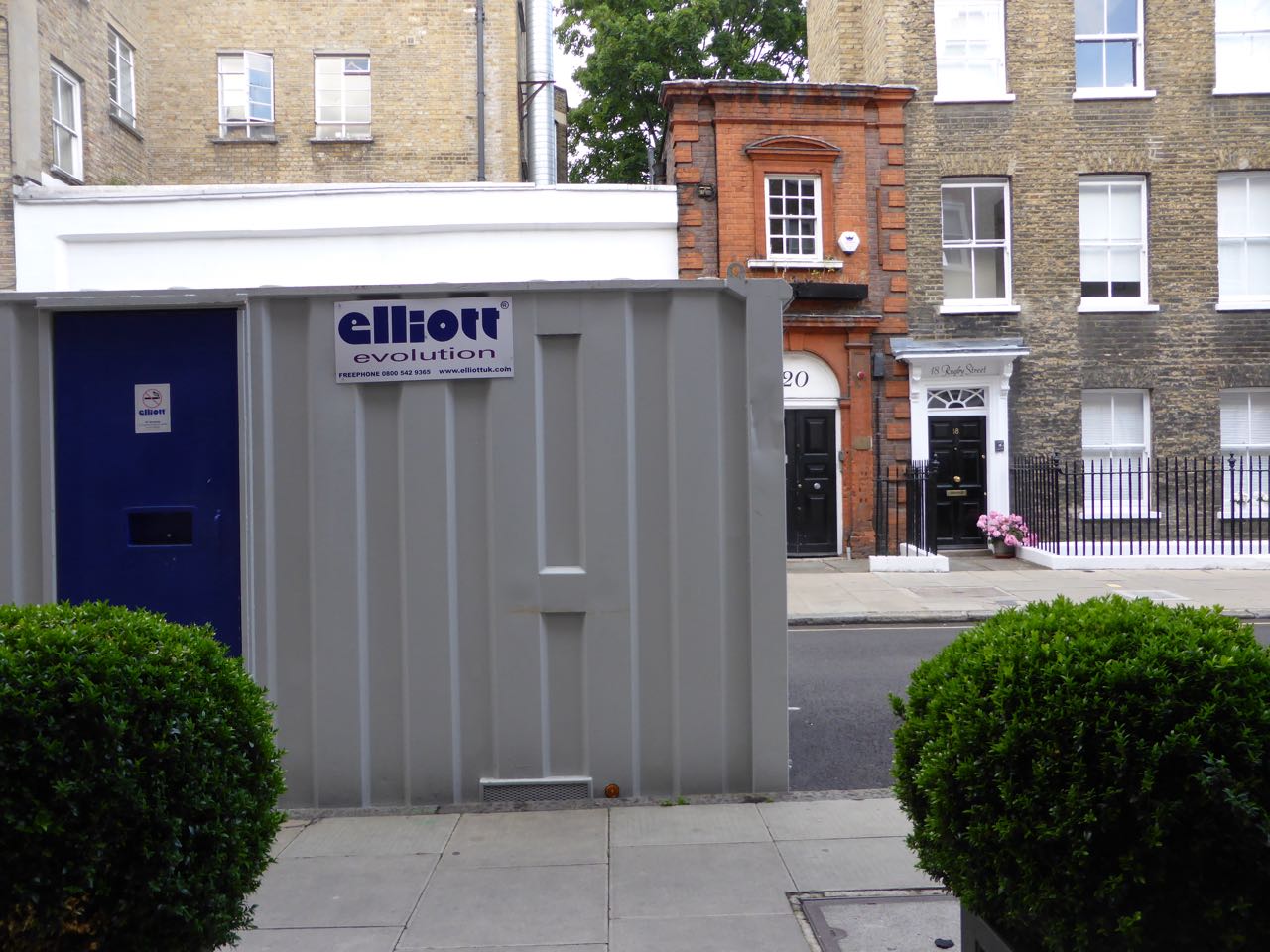 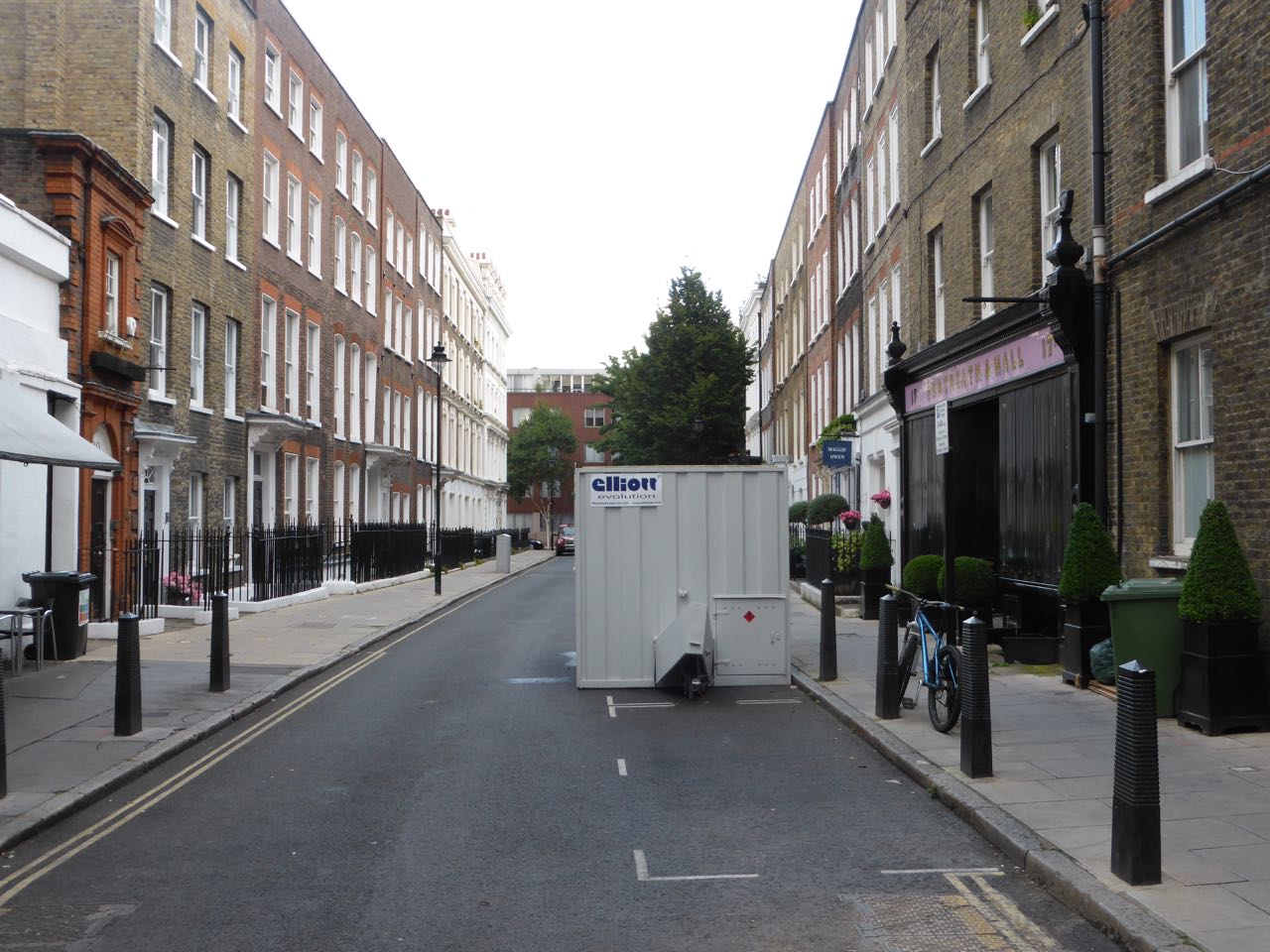 It was a large metal box with no explanation. 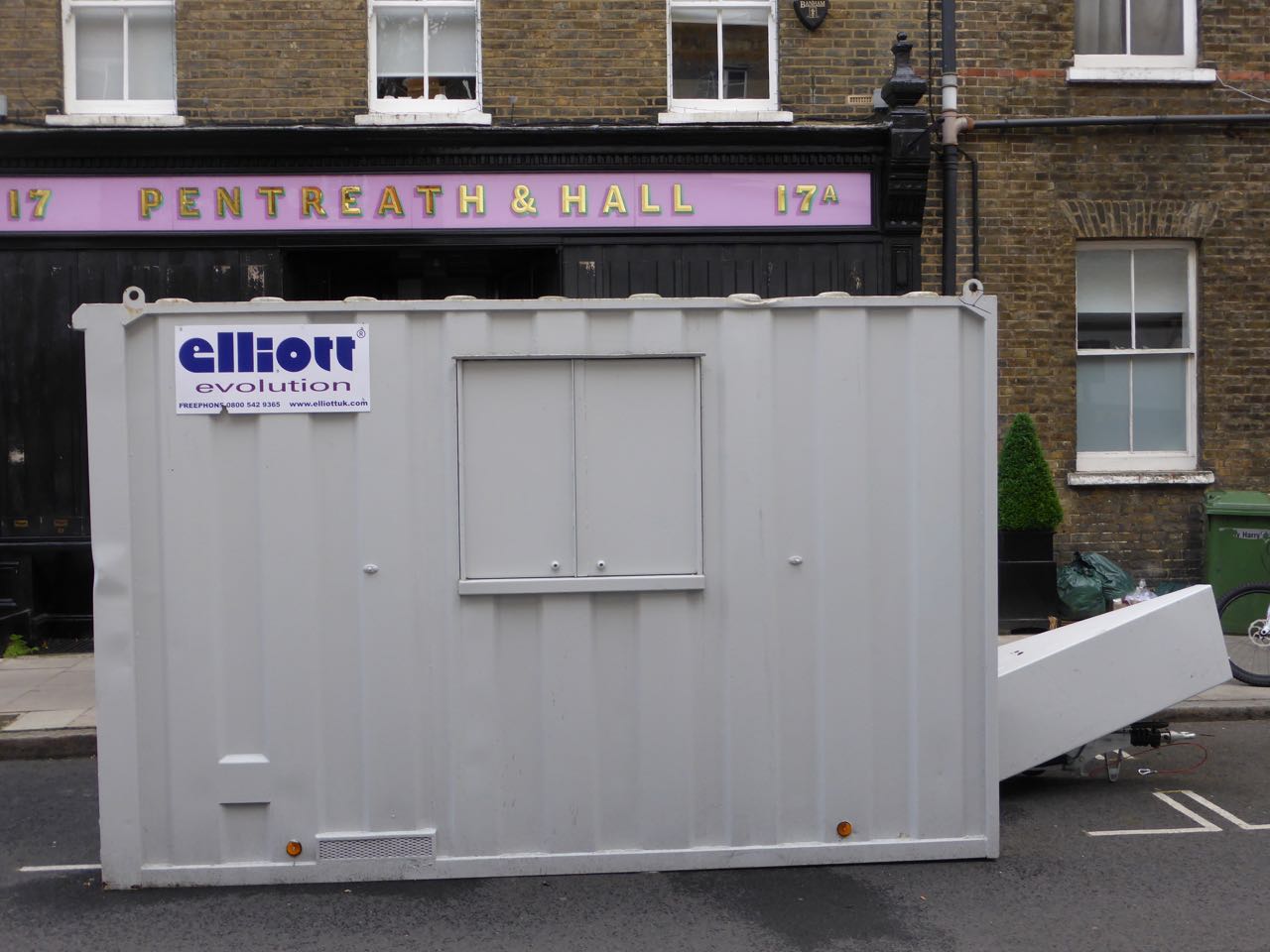 If this was evolution, I wasn’t very happy about it. What was this weird box? Who is Elliott? 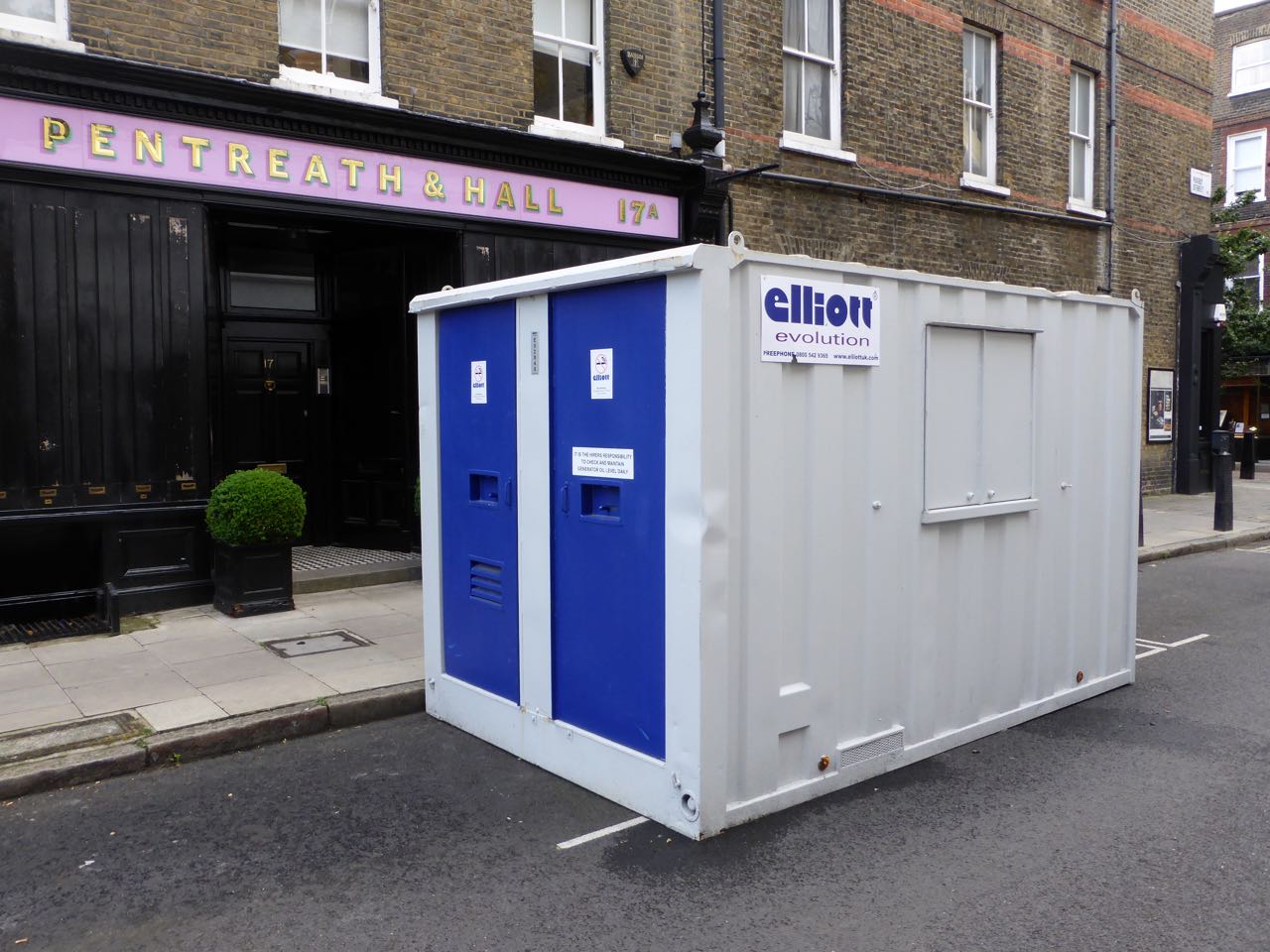 It has blue doors. 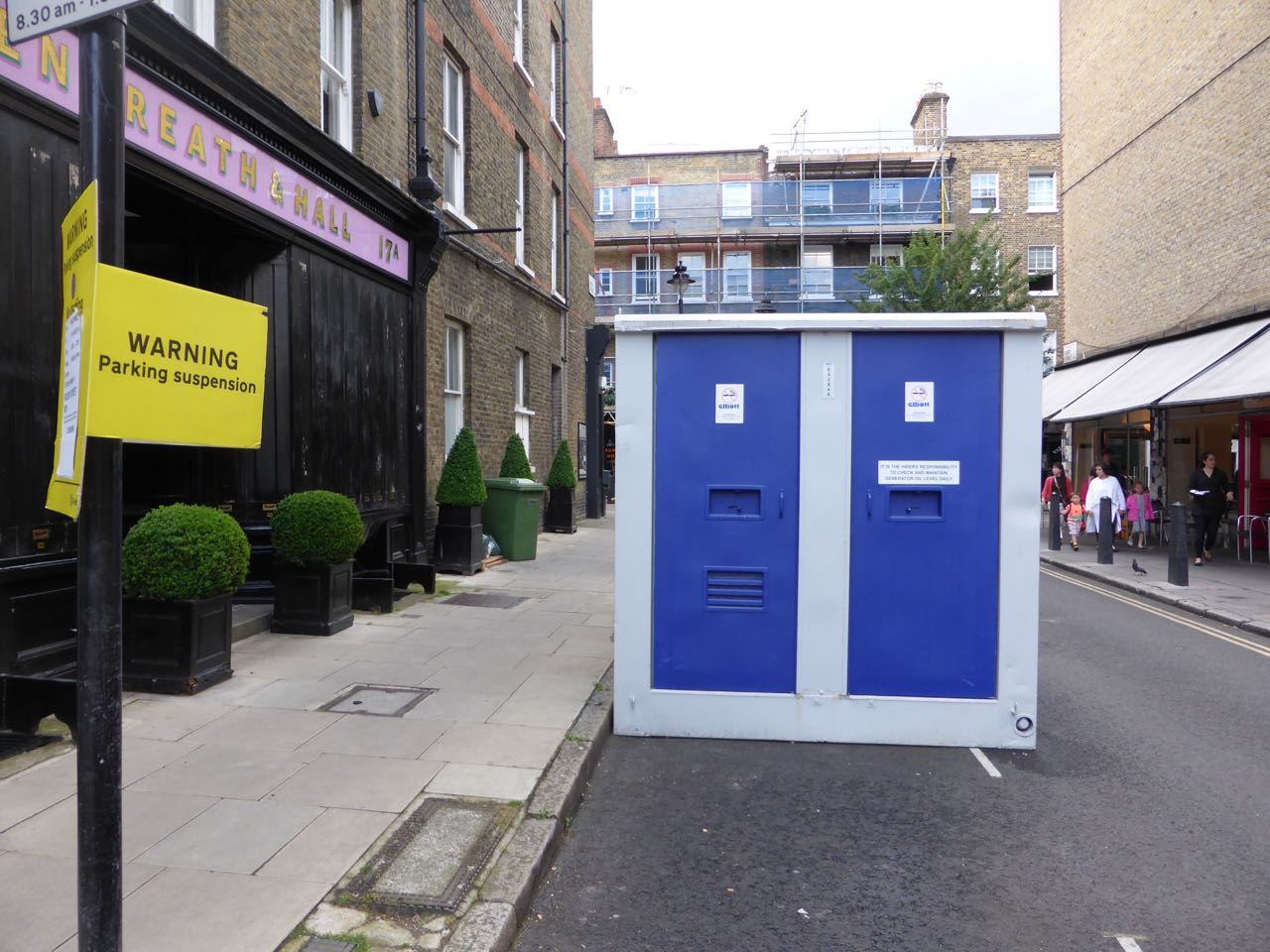 And a look at the Parking suspension notice reveals it is going to be sitting outside our shop for a very long time – until September.  A good thing that Bridie and I hadn’t just organised a street party to celebrate summer, hey?

Now, I don’t know about you but I love our street. And I LOVE our shopfront – and, for that matter, that of our neighbours… Maggie Owen, and Thornback & Peel. it’s not all the time that I give the street a shout out on the blog; we are, after all, modest and retiring types… hehehe… 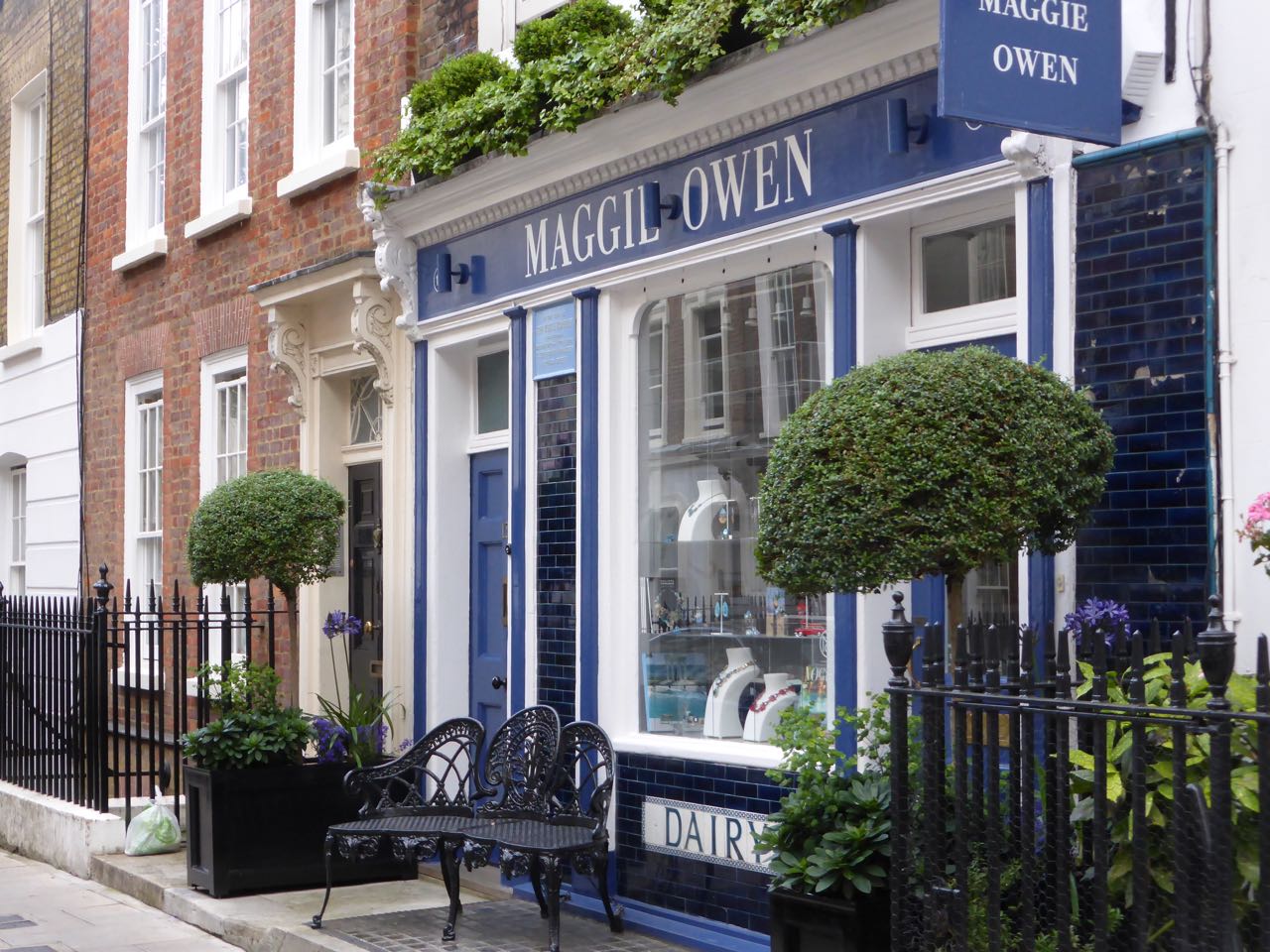 Maggie’s shop was a beautiful Dairy in the 19th century… 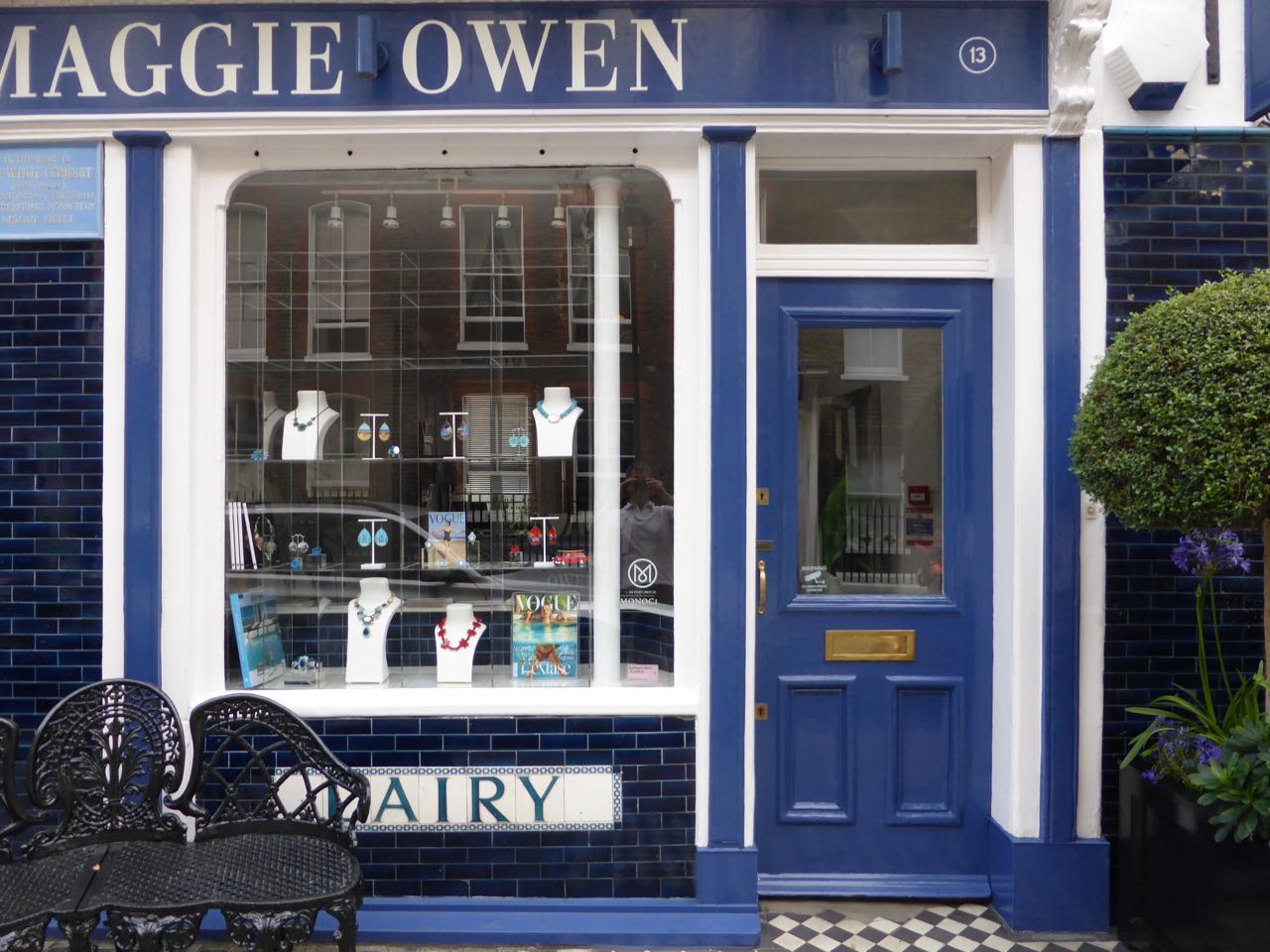 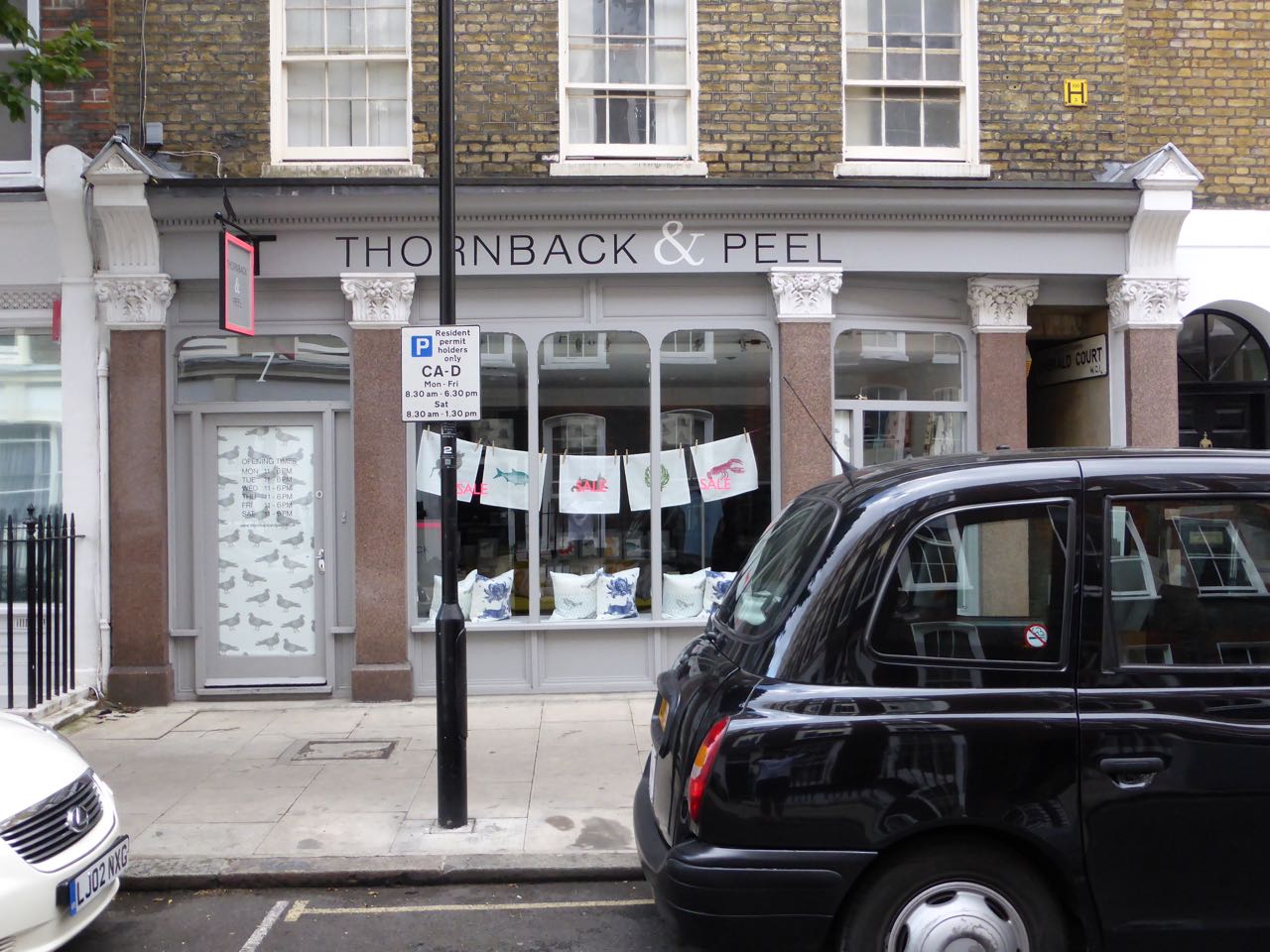 Well, the view of all the shops is completely blocked by the giant metal box.  You can’t even see Maggie’s shop at all, from the other side of the road. Crazy. Didn’t whoever left this box on the street realise that us little retailers depend on people being able to see where we are?  I suppose not. 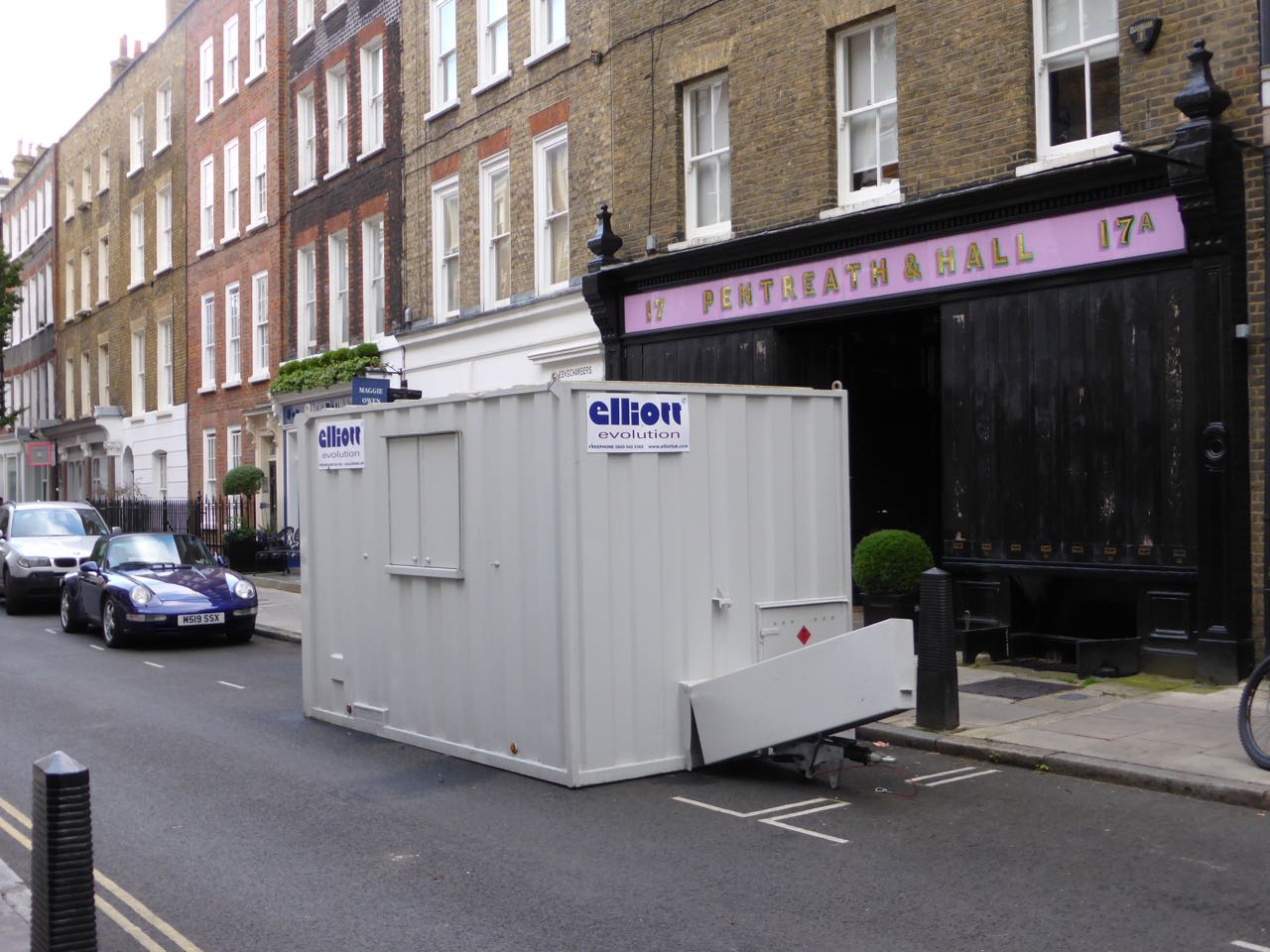 We got on to the council.  It turns out the box is part of a new Health and Safety policy for the building workers who are repairing some of the facades of the buildings on Lambs Conduit Street. And this is their new little home for the next 12 weeks. 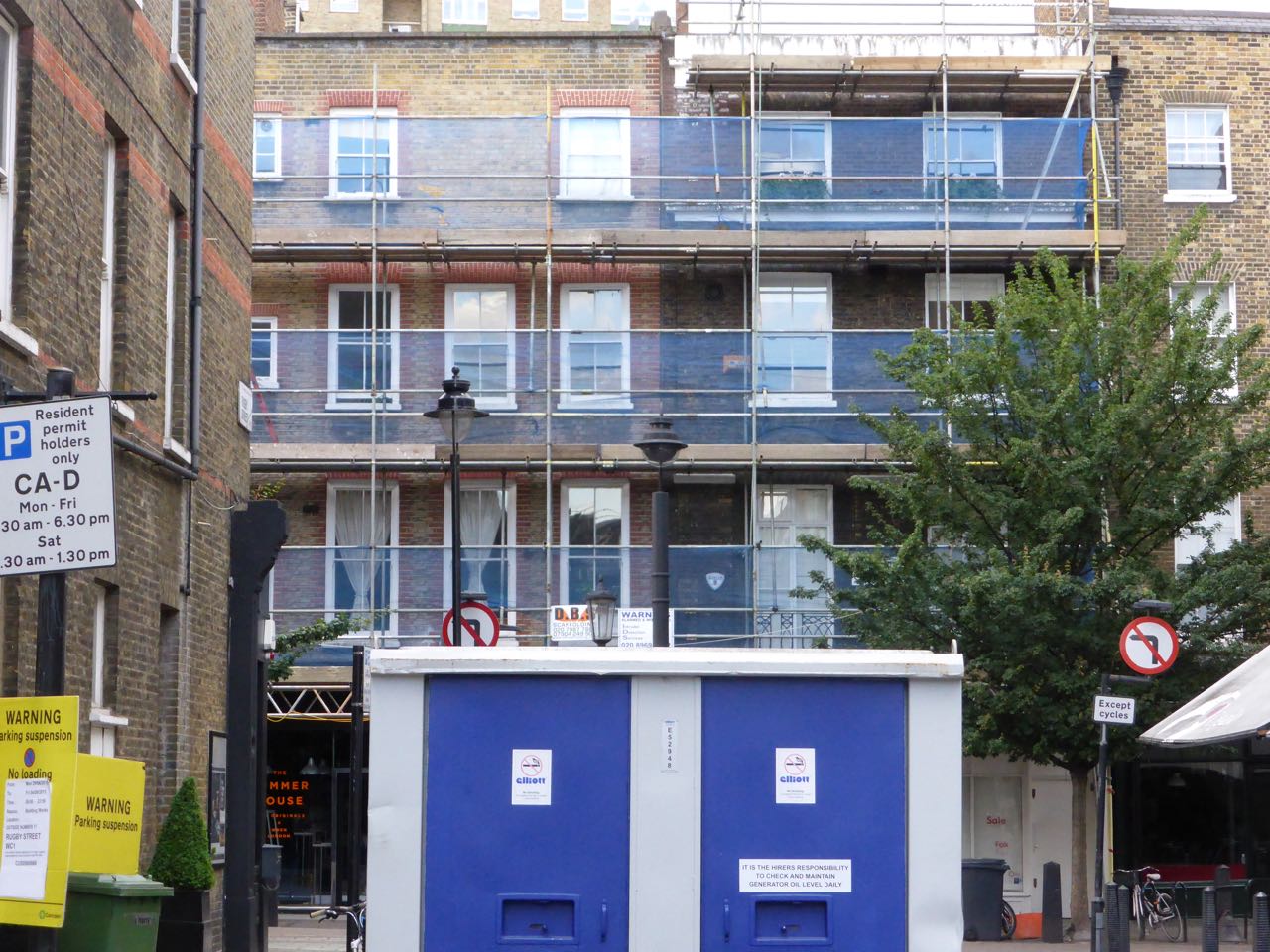 You know, already, that I’m a great fan of Health & Safety. I’ve even gone to the lengths of getting our Health & Safety poster letterpressed, so as not to upset the aesthetic of the office.  Get your copy here. They are seriously cool.

But we are all wondering if the box could have gone elsewhere. Or, even, if it was strictly speaking necessary at all?  But where the movie Brazil kicks in was listening to Zoe, who sits next to me in the office, calling Camden Council on Thursday afternoon to see if the box could be moved a little bit, to right at the end of our street, where there is a lot more room and where it wouldn’t hide Maggie and Thornback & Peel from the life of Lambs Conduit Street.

In all, during the week, Zoe had spoken with nine different departments. It was comical. I have to admit I was pissing myself laughing. “So what you’re telling me”, she was saying to the lady at the end of the phone, “is that I need to speak to Licensing”.  Each department she’d called had given her a new phone number to try. “WELL THE VERY FIRST DEPARTMENT I CALLED WAS LICENSING AND THEY SAID IT WAS NOTHING TO DO WITH THEM“.

In all seriousness, I love Camden council, but it possibly is true to say that the only thing they are really REALLY good at organising is Civil Partnerships, as Charlie and I found when we tied our knot in the Town Hall back in January. Brilliant.  But when it comes to a lot of other things, I am afraid that we can get embroiled in incredible bureaucracy… which makes one slightly desperate.  And in our own tiny little way, may we spare a passing thought for poor, sad Greece, just now? Good on them.

I was reflecting, while taking photographs of the steel shed, just how much I love Rugby Street… its gentle curve of the facades; its beautiful, early Georgian brick facades. 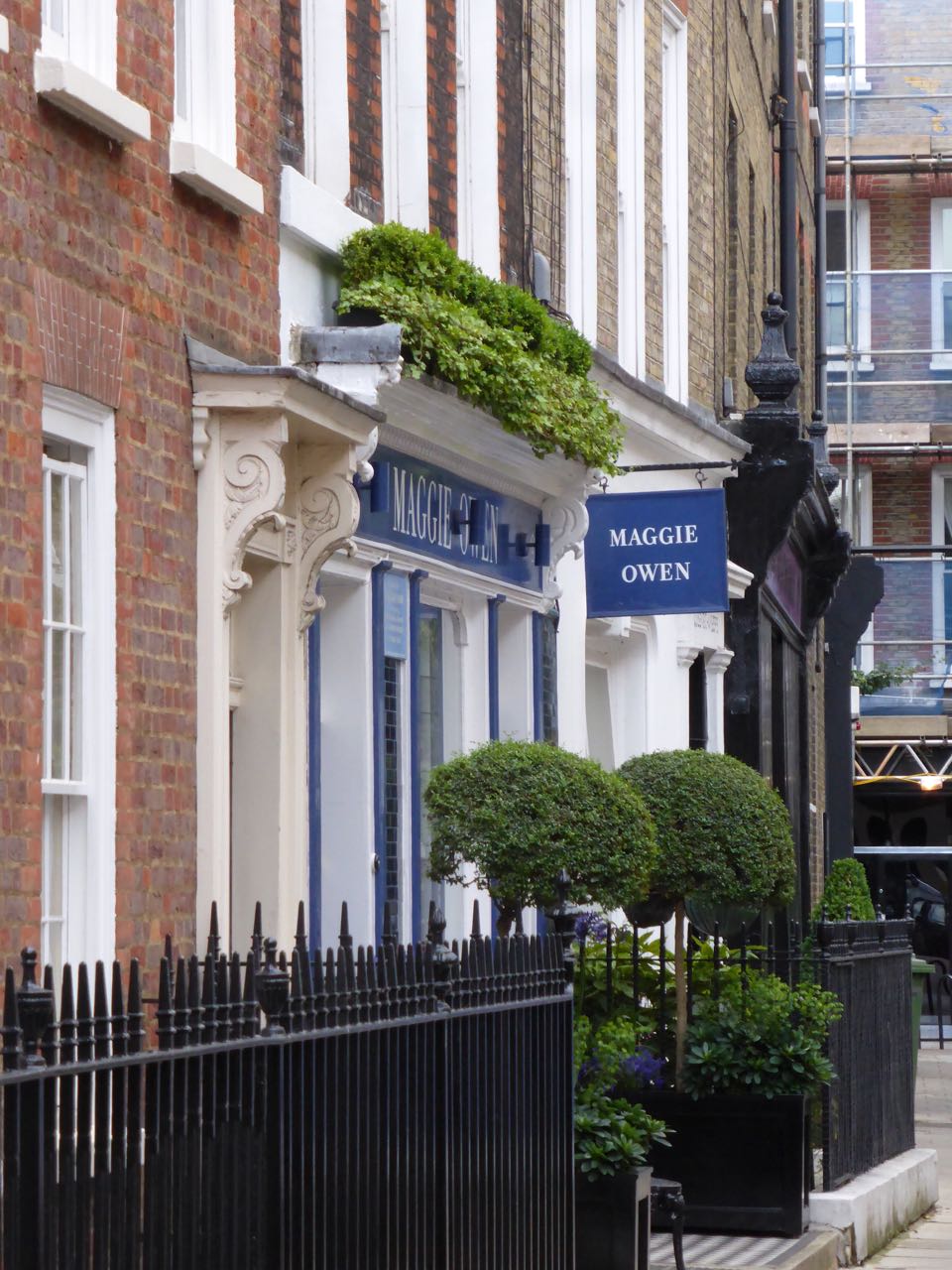 On the other side of the street from us is one of the finest early Georgian street ensembles in the whole of London. The buildings are remarkably intact, with their beautiful, tall sash windows and extraordinary, elaborate carved door surrounds. It’s worth a visit to Rugby Street just to see these wonderful buildings. 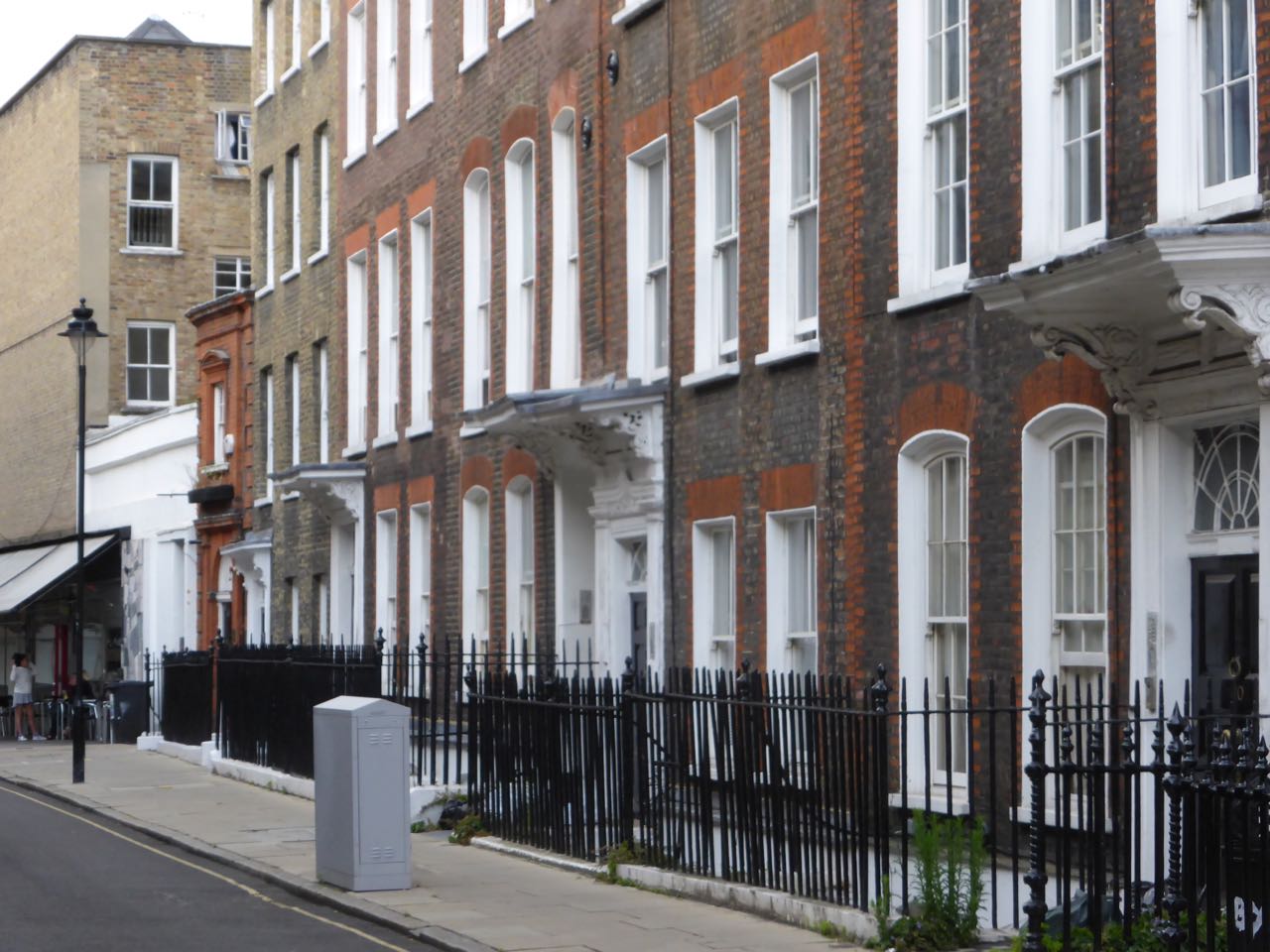 But as I was looking, I spied another box; very anonymous, very grey. 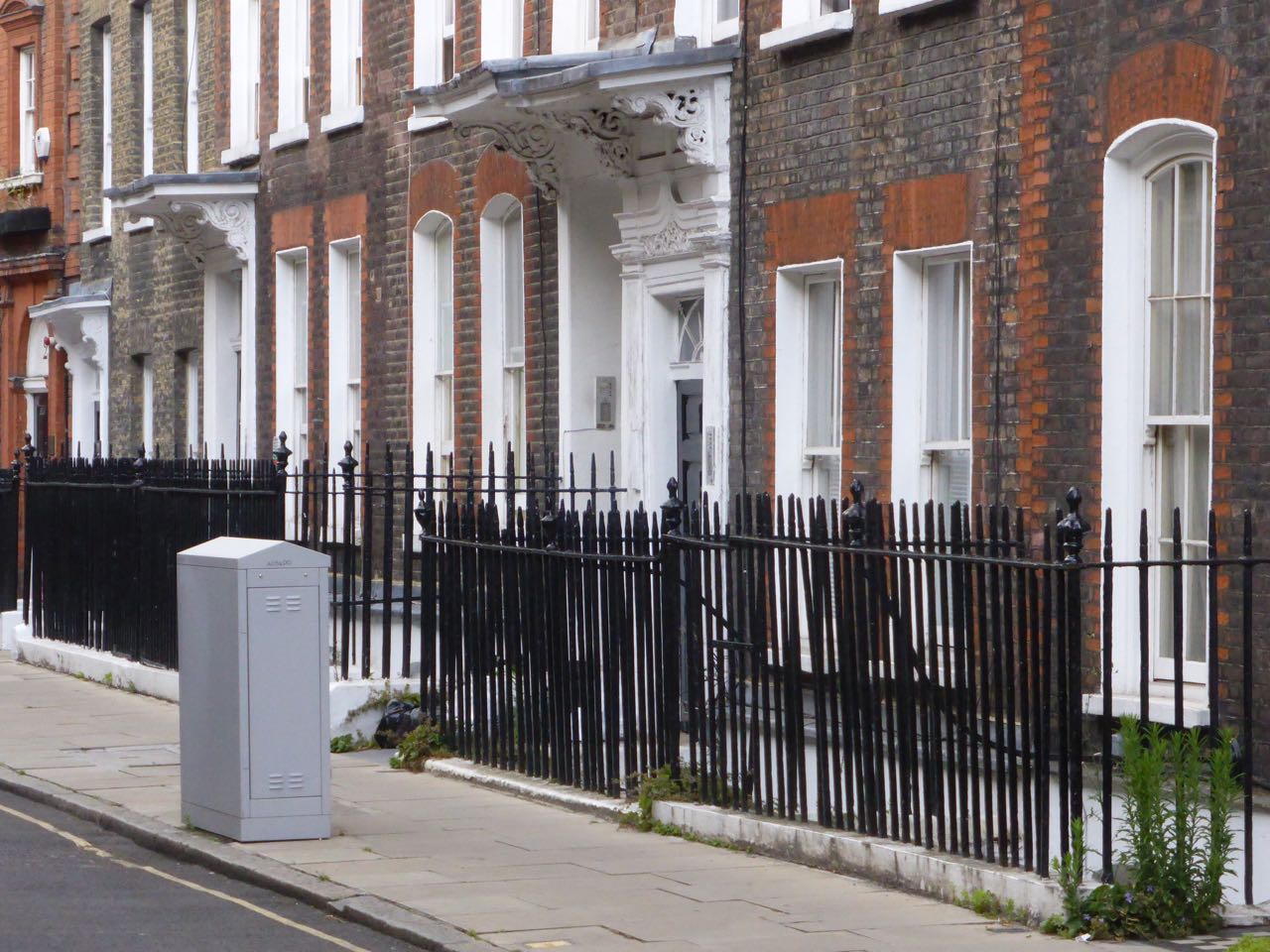 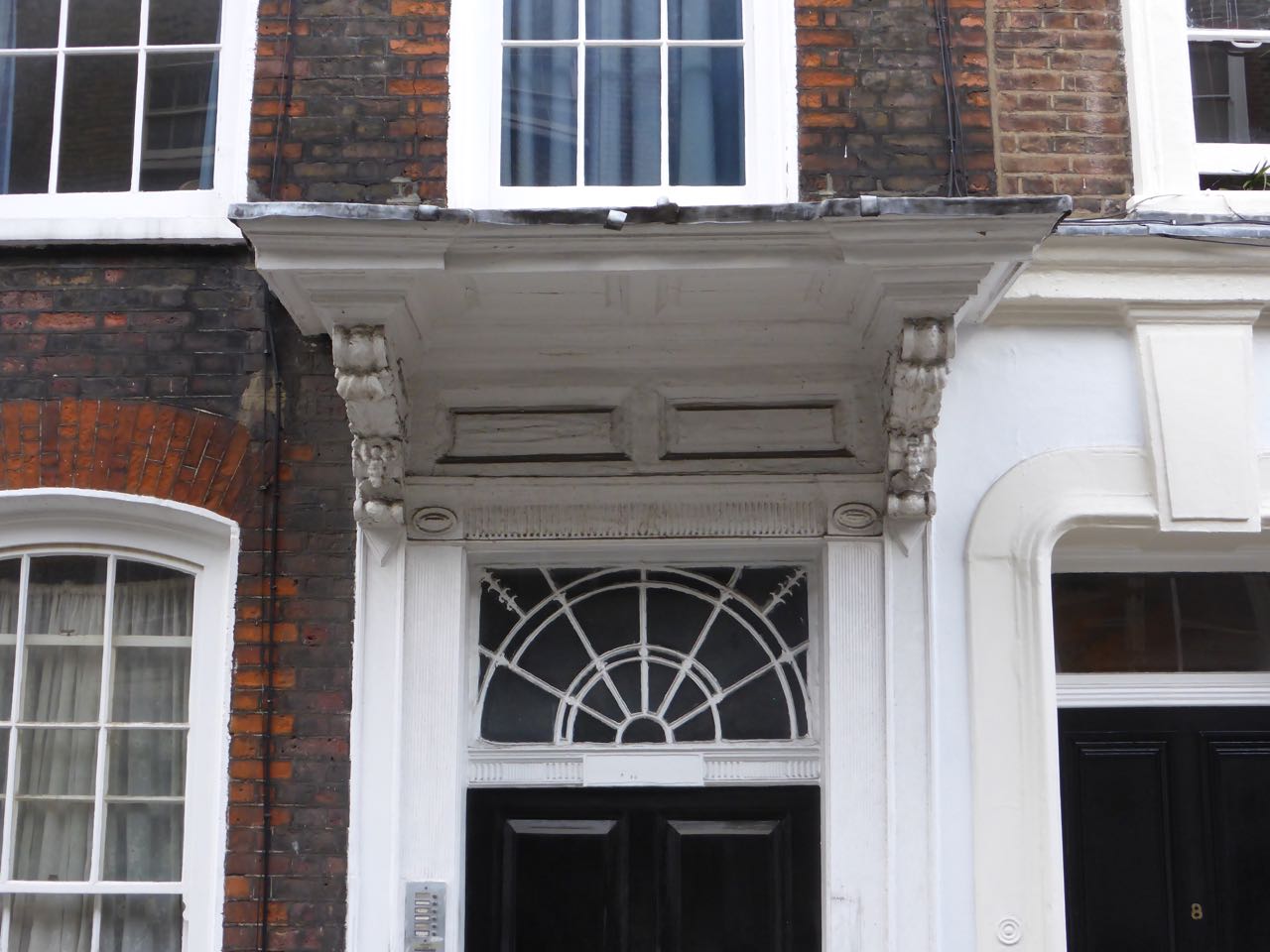 This one is not so large, but it is here for ever. It’s a broadband box, I think.

Isn’t it strange how a beautiful red K6 Phone Box, designed by Giles Gilbert Scott, is a thing that still gives us joy and has become a beautiful part of the street scene wherever it was placed – often with tremendous sensitivity to the precise qualities of the surrounding architecture.  Here are three examples, pulled at random from some of my photos of London: 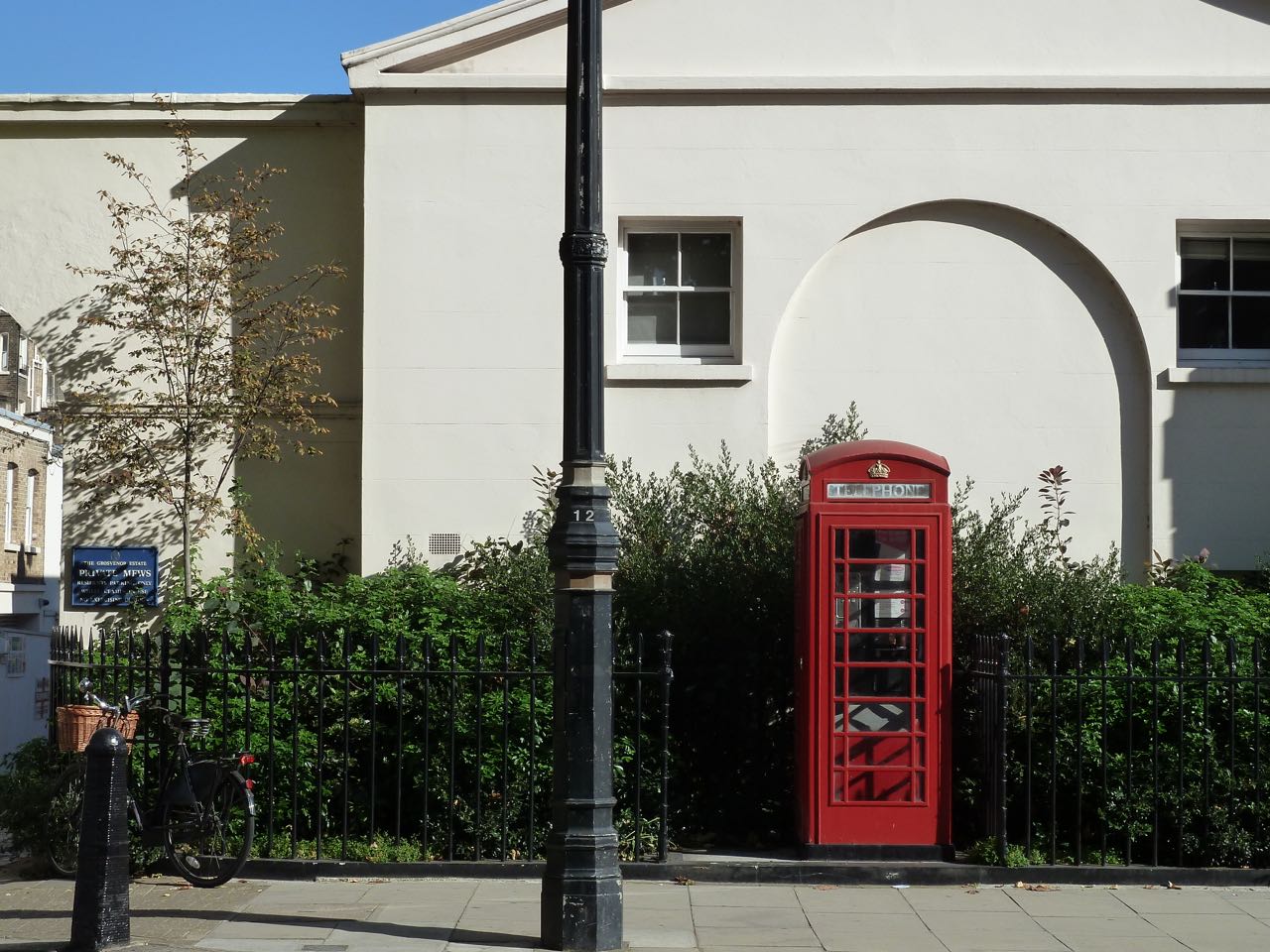 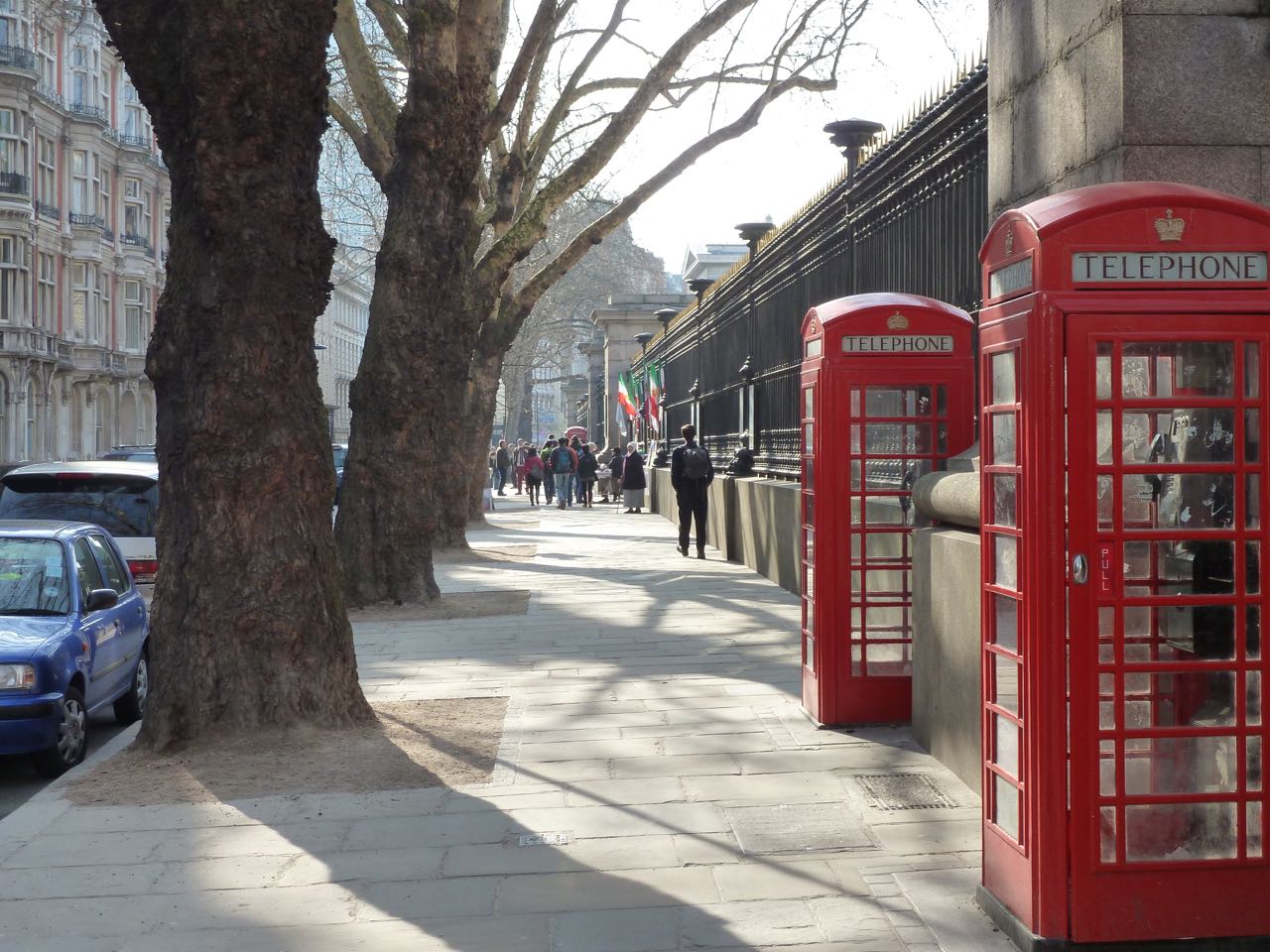 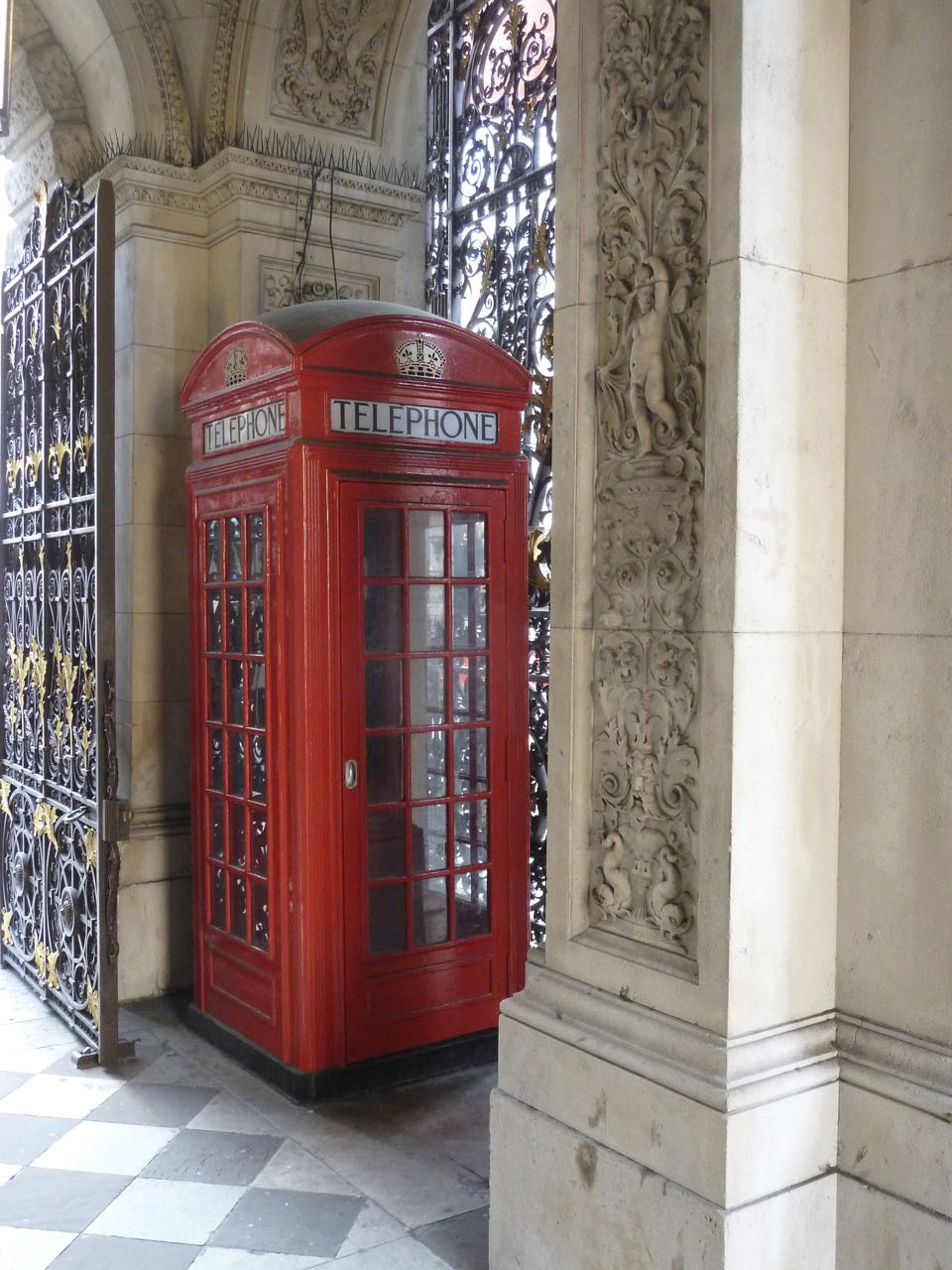 We can’t quite say the same today.  And that, I think, is a shame.

I’m not saying Broadband boxes need to be classical temples (although that would be a start). Perhaps my friend Tom Heatherwick could have had a go at doing something beautiful and interesting. Or perhaps someone, just someone, could have given a thought to this gross metal box in front of the beautiful buildings. 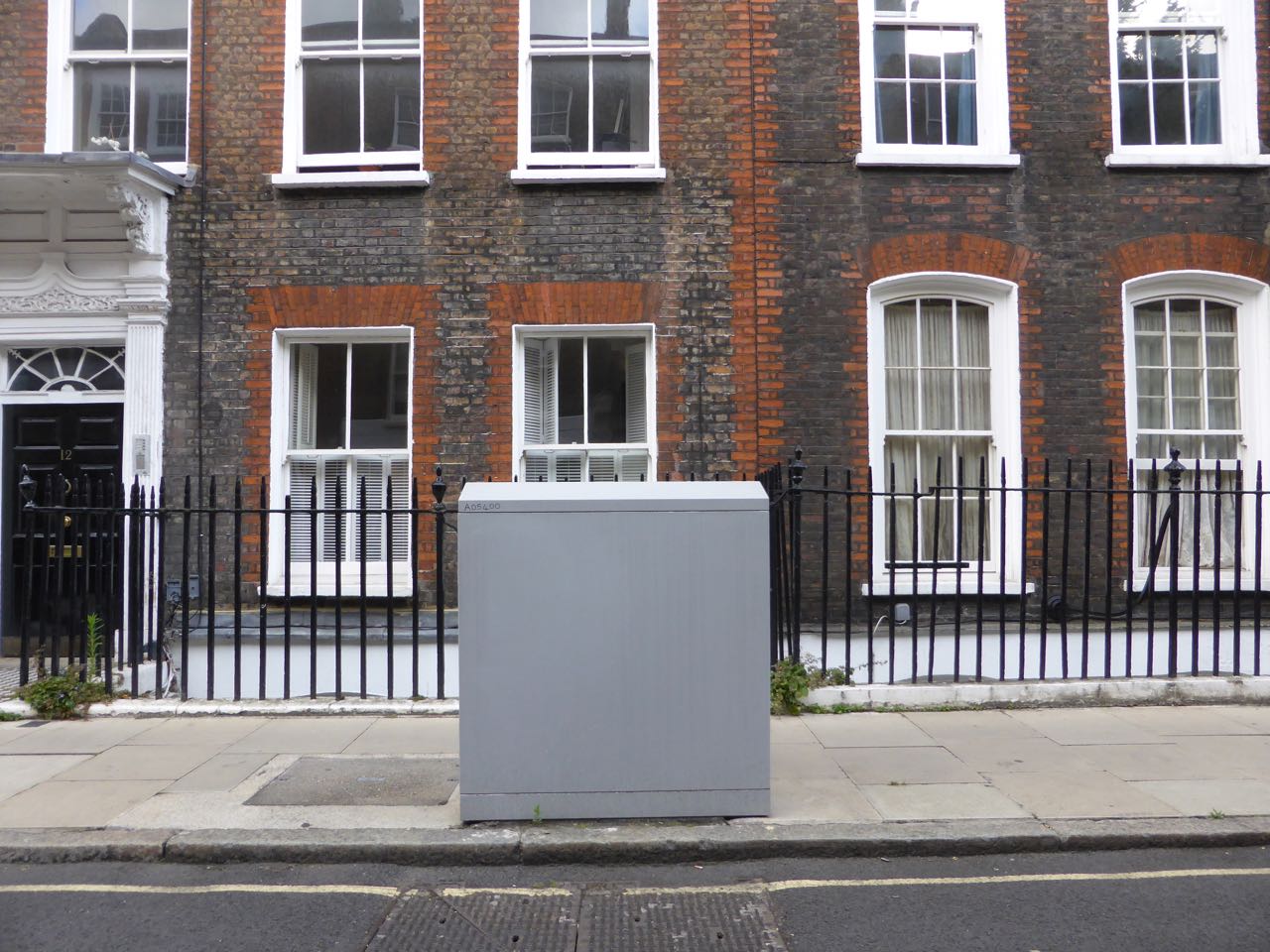 I suspect the door canopies will be around a lot longer than the box. 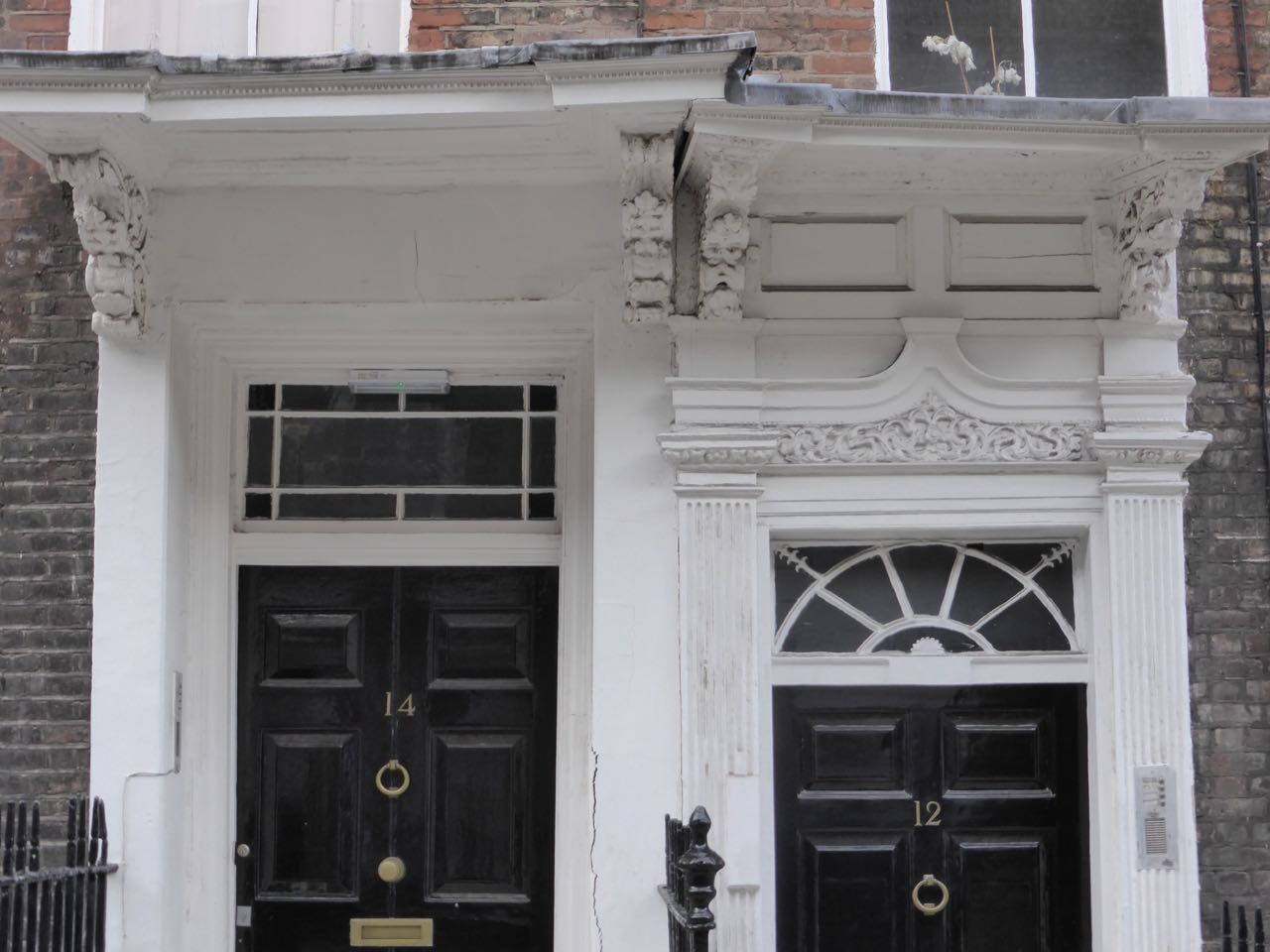 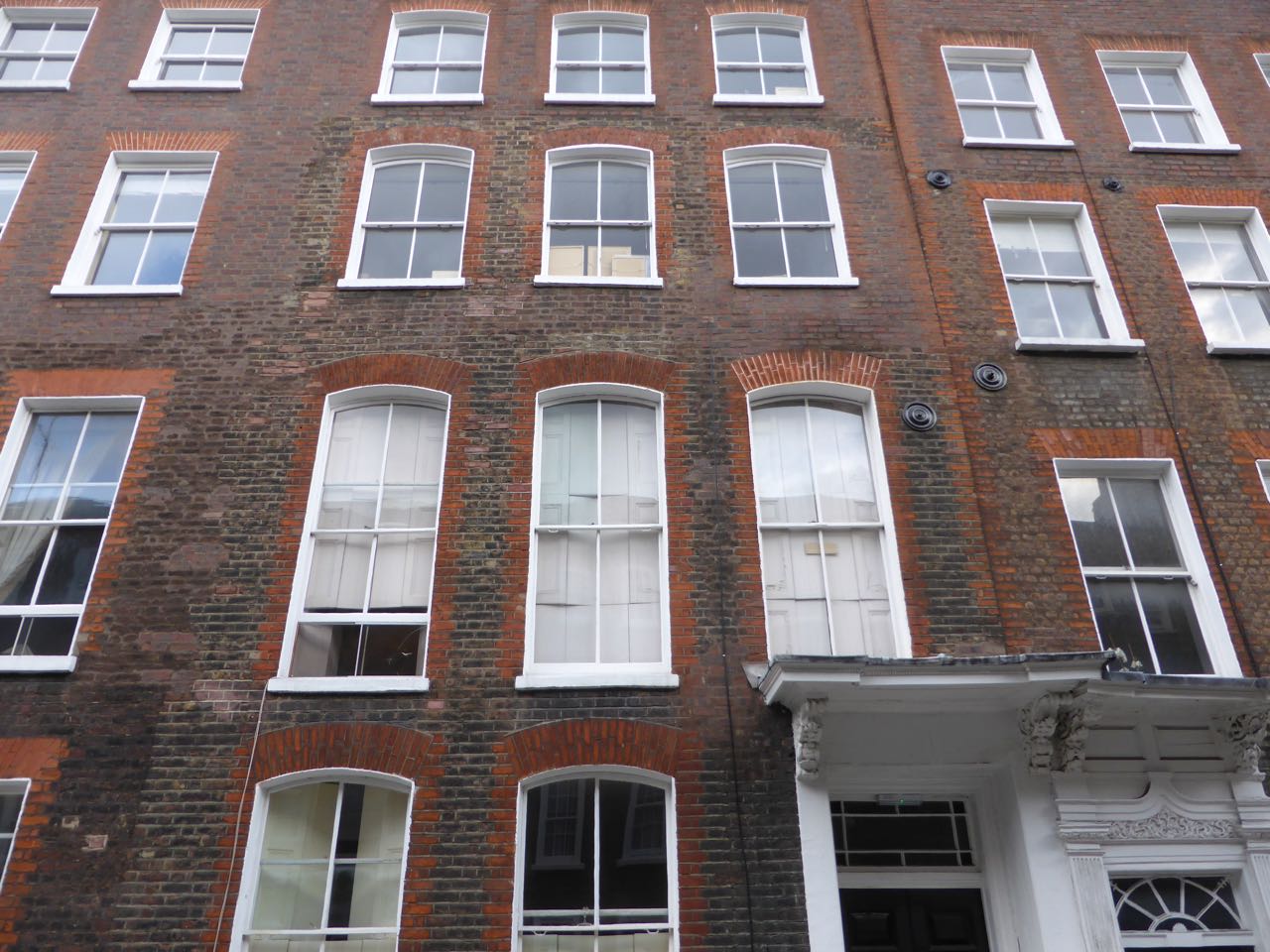 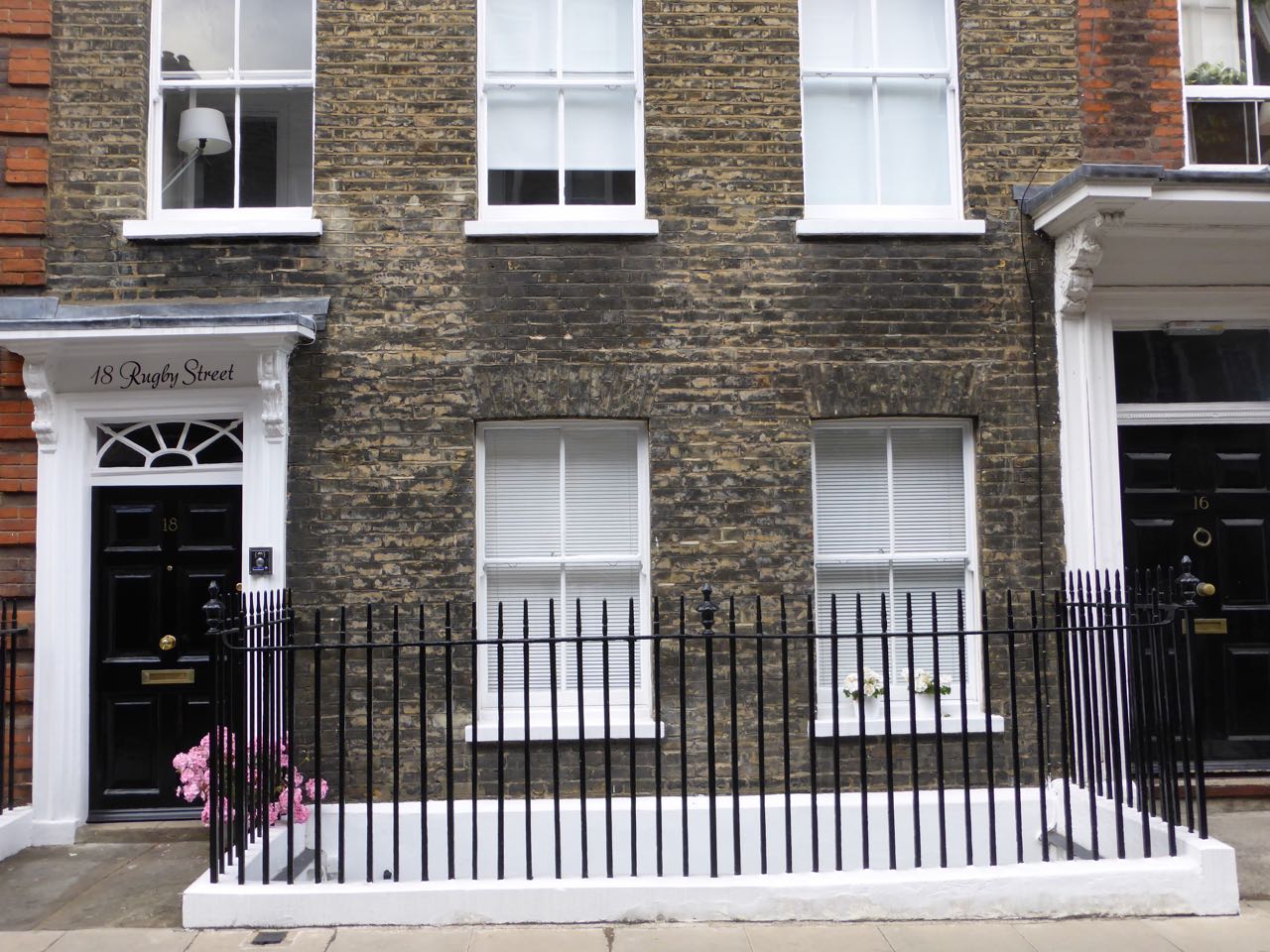 So there in Number Eighteen Rugby Street’s

Victorian torpor and squalor I waited for you.

I think of that house as a stage-set –

Four floors exposed to the auditoriums.

On all four floors, in, out, the love-struggle

In all its acts and scenes, a snakes and ladders

Of intertangling and of disentangling

Limbs and loves and lives. Nobody was old….

Golly, that’s a first. The first time I have ever posted a poem on the blog.

The blog, for many of you, is about finding beauty in the world, and you’ll know that I find beauty where it’s not always expected… particularly on a hot, sunny weekend in London. So I’m sorry to give you photographs only of metal crap thoughtlessly tossed on to a little London street – some of it temporary, and ridiculous; some of it permanent, and sad.

To cheer up your Monday, here’s a shot of the Rose Garden in Regent’s Park at dusk, this evening. I had gone for a run to the park (don’t worry, I can only walk back). Thank goodness for that. It turns out that life really is a bunch of roses after all. 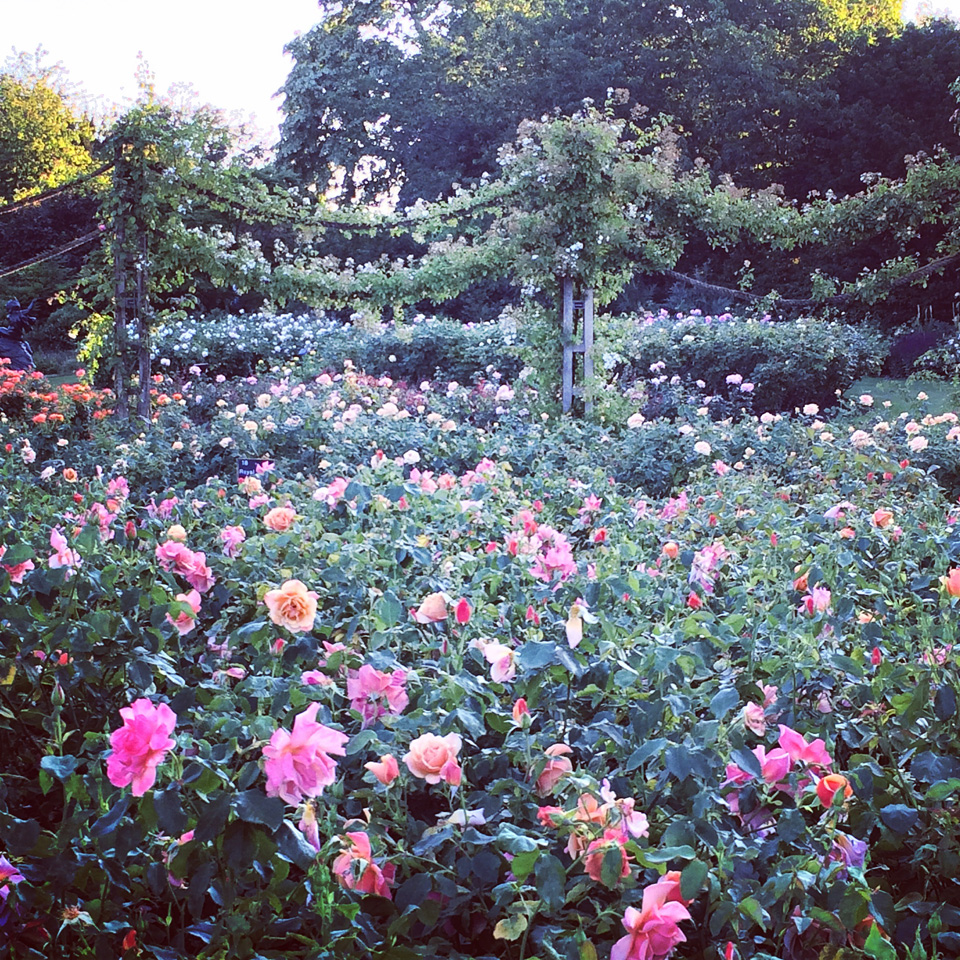 I’ll keep you posted on what happens next on the street, but I’m not quite holding my breath.

Oh… and watch this space for news of our Summer Sale, coming to a little store near you very soon…

Lots of other news in the offing, for which you’ll have to wait a week or two, and all will be revealed.  I hope you have a really wonderful week.

The post There’s a box on my street appeared first on Ben Pentreath Inspiration.