I’m afraid this is going to be the shortest blog ever, partly because the week has whizzed by quicker than ever.  Here’s a photo of the house this evening, a cold, grey, wintry afternoon in Dorset. The leaves are completely off the trees, although in the garden some flowers continue to struggle on. 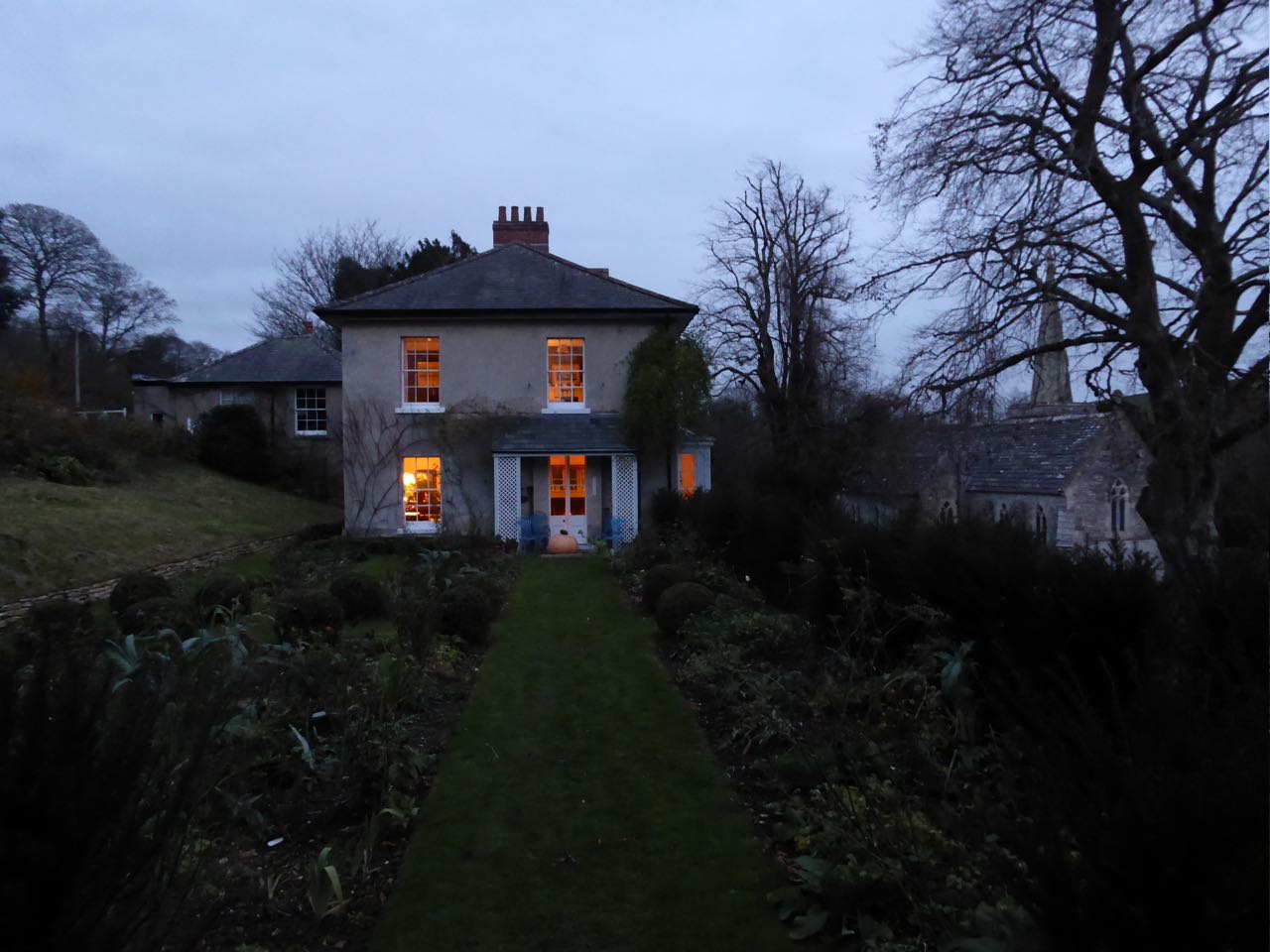 But I love this time of year, when it starts getting dark at four; here we are, lying by the fire, Mavis fast asleep at our feet, and it’s 5 o clock and a quiet evening stretches gently before us. I’ll admit, one of the happiest things about running my own office is that I can, from time to time, simply decide not to get the train up to London on a Sunday night, but instead on Monday morning, and at this time of year not too early (I don’t know about you, but I hate getting up for an early train when it is still pitch dark), without having to call and check with anyone. Thus it is tonight.

We’ve had friends staying, but they were out for a big 50th birthday party dinner while Charlie and I stayed at home and babysat. Which was the nicest thing ever. At 7 o clock we and the children were entirely changed into our pyjamas watching Little Miss Sunshine (which has to rate as one of my favourite films of the last decade) on the big screen, eating pizza, popcorn and ice cream.  The most blissful Saturday night, off to bed by 9.30. Life is so exciting here sometimes!

And today, all we did was to cook a big breakfast, go to church, go for a walk, and cook and eat a long lunch, and wave them all goodbye this afternoon.  One of the things about living next door to the prettiest church in Dorset, where, of course, Charlie and I were lucky enough to have our wedding blessing, is that we like to go to services every now and again. As much to support the village, and the institution, for any other reason, but all reasons are important. Today, the congregation was small, the church was freezing cold, and the organist Sandra was away, so we were without hymns. Moreover our wonderful valley vicar, who was so kind and so thoughtful to me and Charlie when we were developing our plans together 2 years ago, has just found out that he is really, really unwell. We are all praying for him.

So it could have been, how can I say, a bit bleak. Curiously, however, it was one of the most beautiful services I’ve been to for a while. Here we were, just eight of nine of us. There was something incredibly peaceful and quiet about that small gathering, for what turned out to be the first Sunday in Advent, although we are not yet at the first of December.

Ed, the priest who is standing in for Stephen, gave, therefore, a quiet talk about Preparation. He wanted us to compare the frantic preparation that many of us feel in the lead-up to Christmas, ticking endless things off lists, buying presents, rushing around, getting in huge quantities of food, or drink; making travel plans – with a different approach. He talked about so many projects – a fact I know deeply for myself, in the architecture world – which need to be finished ‘by Christmas‘.  I was sitting there thinking how many clients have insisted to me in the last 5 or 6 weeks that we get this or that project in for planning ‘by Christmas‘. How many false deadlines do we need in life?

And then instead, he talked about a different, deeper sort of preparation; much quieter, much more subtle, much humbler. This is a preparation of our own mind, of our own heart, for an entirely separate event. Not a countdown at all, but one which is engaged with a deep sense of renewal and re-birth. That’s what I love, I realise, about this particular time of year; with its silent, cold soil, plants diminishing, leaves falling, days shortening; all in preparation for the turning point that comes with the Winter Solstice, and with Christmas.

Whatever your cloth, your belief, your lack of belief or your mere humanity, I have the tiniest hunch that this is something we feel and need deep within us. This last week of November, we’re all on the tipping point of the headlong rush to the end of the year; the noisiest, most frantic time of the calendar, parties to the left and right. That still, small, quiet voice that comes from the deeper theme is all the more magical and necessary for it, but it can get lost so easily. It is the voice that speaks so quietly that you have to listen hard to hear it; but it is the voice that can tell us to look beyond our own problems and think of how to solve them, and to help others with worse problems of their own.

Over at Pentreath & Hall we are about to invite you to join in the noisy Christmas preparations. That’s all well and good, and Bridie and I, Sarah and Mary are really looking forward to seeing as many of our neighbours as possible at our Christmas street party this coming Thursday. But in amongst the mince pies and mulled cider, and the rush and din of the next four weeks, make time in your life – somewhere, early in the morning, late in the evening, sitting on the bus on your way to or from work, I don’t know – for a quieter form of preparation.

I’m sure that all of our worlds, and the whole world, will be a little bit better for it. 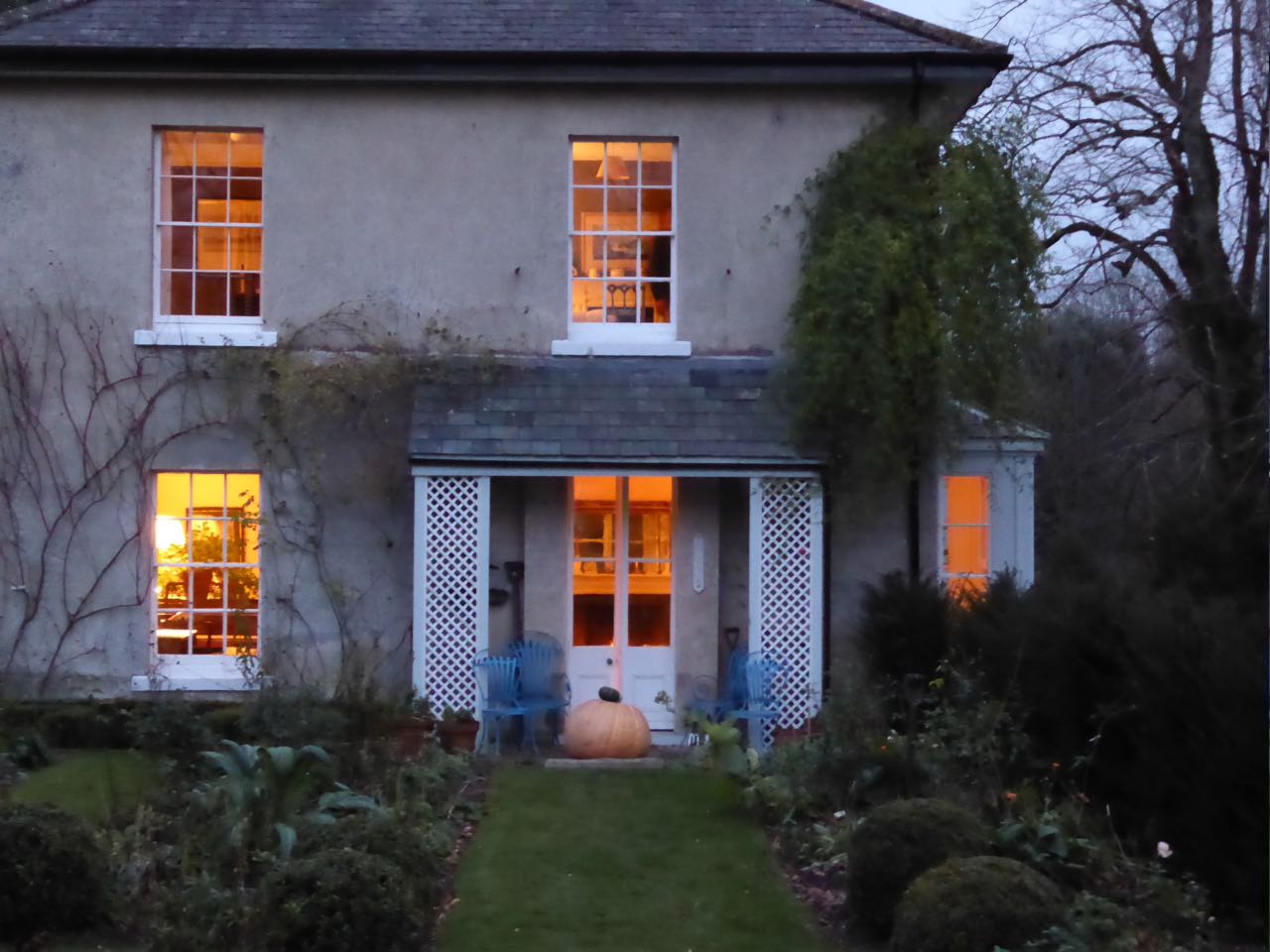