I realise that it’s a year ago to the day (18th August) that I wrote a little blog about the Siena Palio that… how can I put it?… set the temperatures soaring.  Well, I know I said that the blog is on holiday (and it is… after all, I’m writing this in the little cafe in the little square in the little town, Gaiole-in-Chianti, which is basically pretty close to perfect)… but I couldn’t help but let you know that the Palio was even…hotter… this year. So I hope that it’s true to say some jokes are worth repeating.

A couple of days ago Valentina and I spent a bit of time looking at, I don’t know, 8 or 9 years’ worth of photographs of holidays in Italy. The same sunsets, the same views, the places, dinners, days. The same greengrocer and shop keepers in town. The same events and activities… like an unchanging ritual. The only thing which changes is the cast of characters… children that were babies are now nearly 10… and some friends come and go.  But the setting doesn’t shift at all.

But when I look at my photos from last year’s Palio and this one, it really is true to say that things don’t change… at all.  That’s one of the things that I love about Siena.  And when you think that the Palio has been running since 1656 (with much earlier, medieval, origins), you realise that a mere banking crisis – such as that which has ripped through Siena this spring with the near collapse of the world’s oldest lending house, the ancient bank of Monte dei Paschi de Siena, a crisis that runs deep in to the heart of Italian politics – is best shrugged off. Time to enjoy the view. 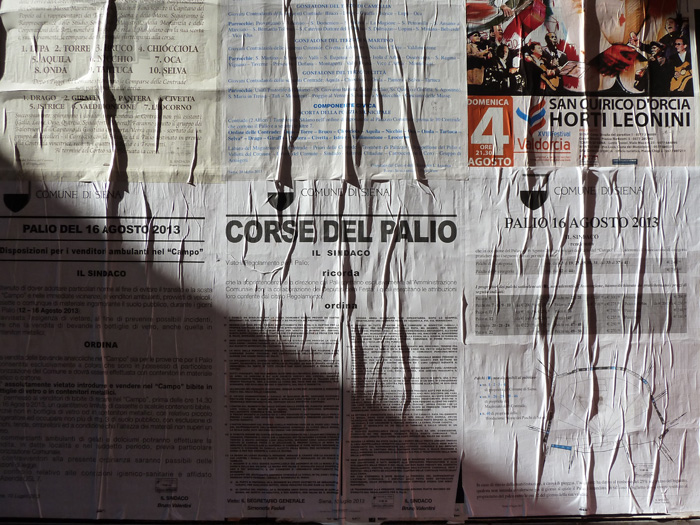 Even in the crowds heading down Via Banchi di Sopra, on our way to the Campo, we realised it was going to be a hot day. 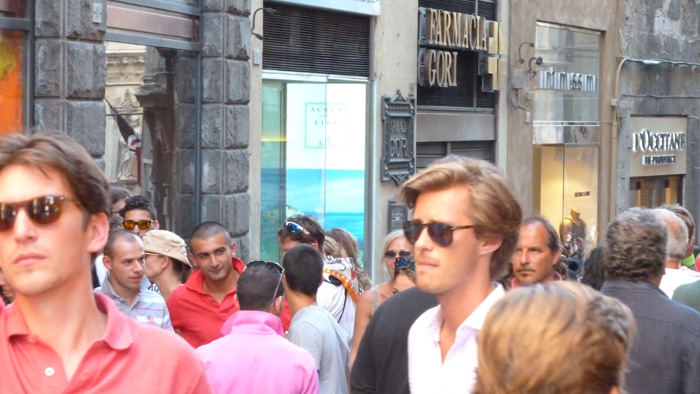 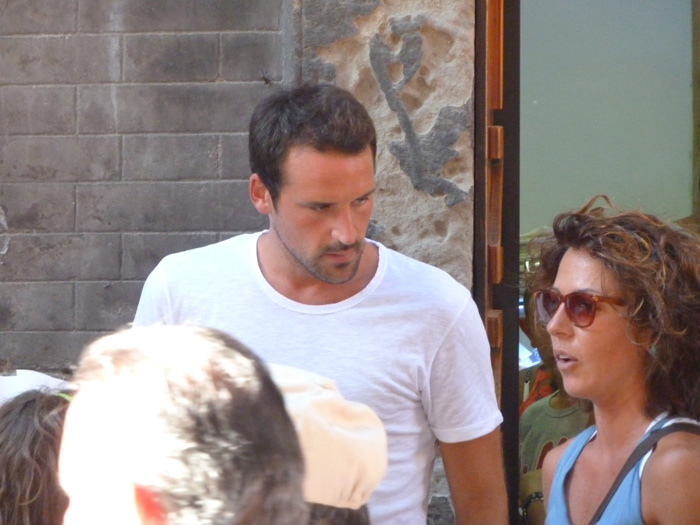 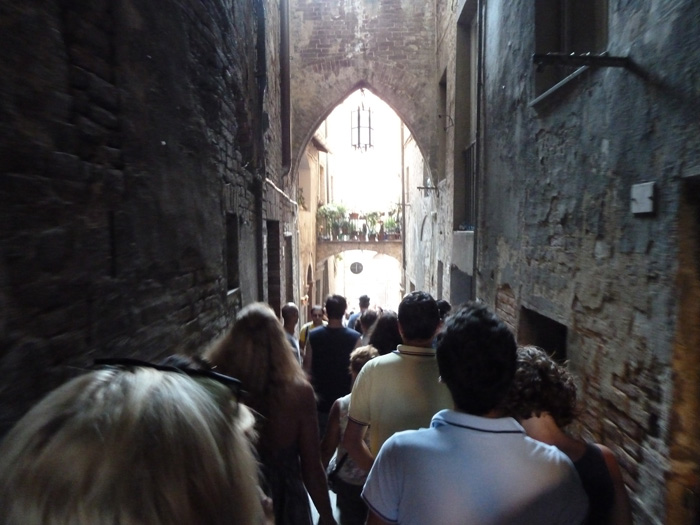 The crowds surged down the same narrow alleyways… 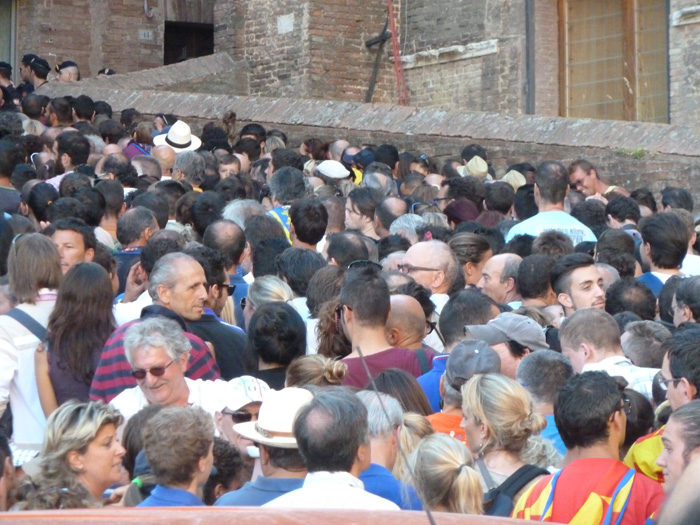 and up the wide ramp that leads to the last entrance into the Campo, filled already with thousands of expectant spectators. 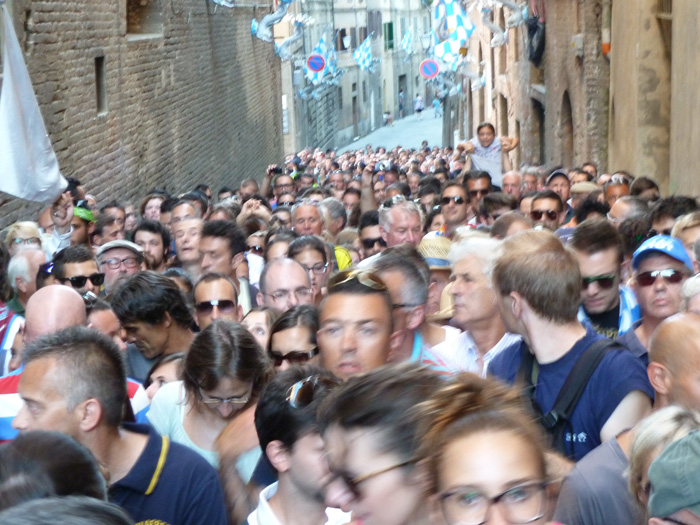 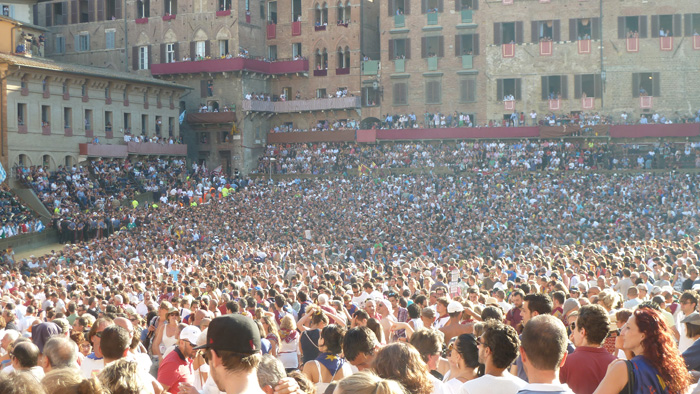 Before emerging in to the vast natural bowl of the Campo, filled with people.

And it is here, of course, that the fun begins. I’m glad to say in our little group that I had some willing helpers, spotting, how shall I put it, some of Siena’s finest. 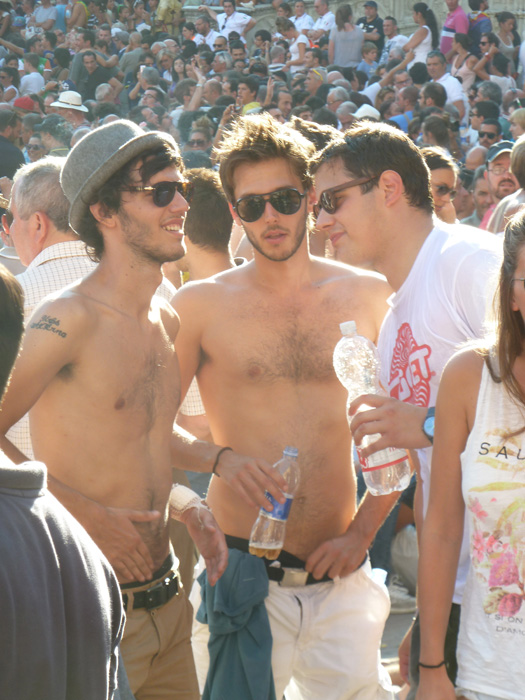 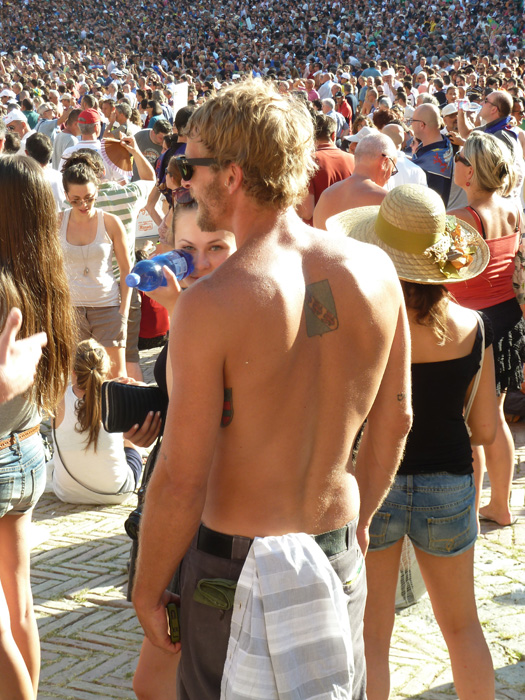 I wasn’t particularly in favour of “the back”. Others were. We are a democratic blog here at Ben P towers. 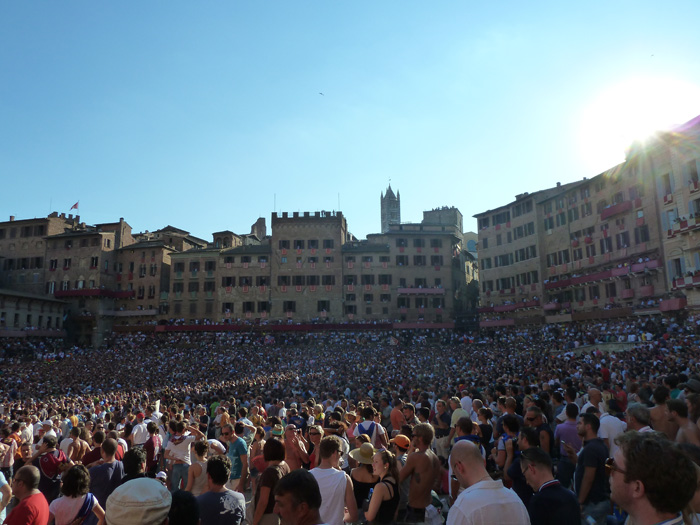 I include this photograph (as the sun gently sets behind the buildings at about ten to seven, and lengthening shadows extend across the square) merely to highlight the enormity of our task. That’s a lot of people to check out. 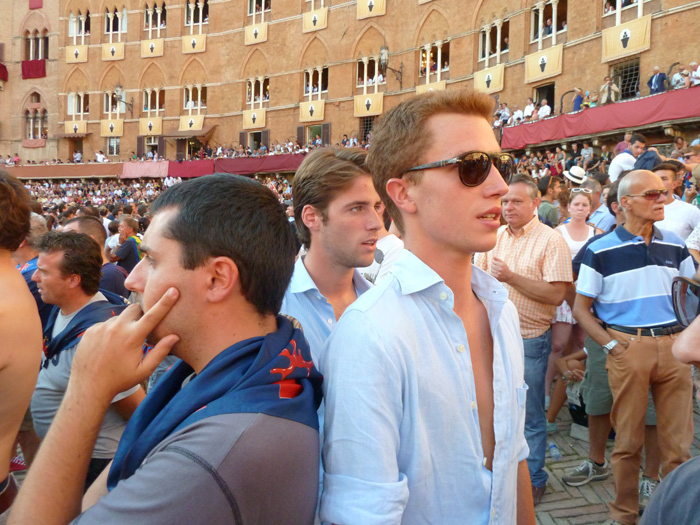 Thankfully some guys were kind enough to be hot and close. 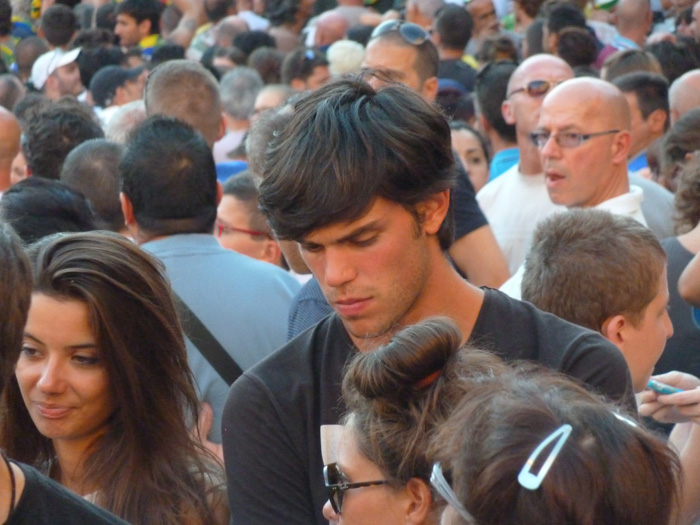 Others were nearby. Okay, maybe a bit too much hair, a little too much brow, but serious. And worthy of inclusion.

And luckily, for those further afield, I’ve got a rather useful zoom lens on my little camera (an old Panasonic Lumix, in case you were wondering). Let me demonstrate. The following photographs are included purely for technical reasons.

For instance, this tower, far on the other side of the square: 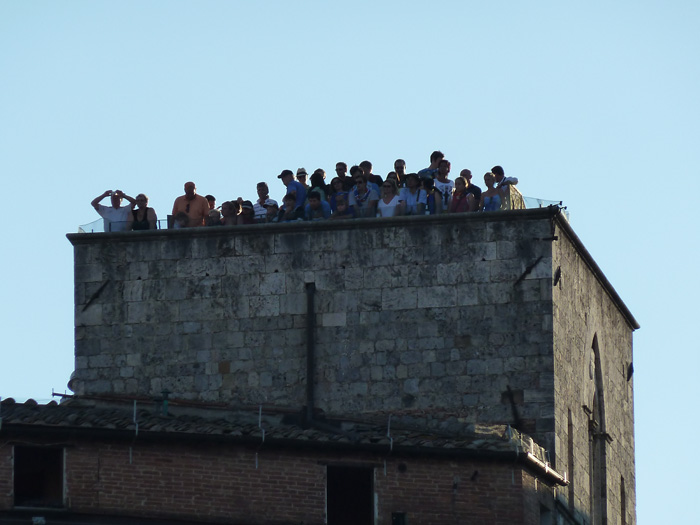 Or this balcony, lined with the great and good. 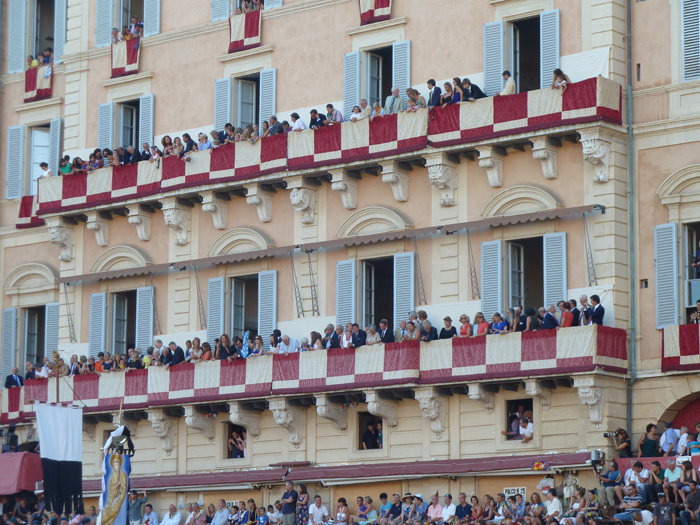 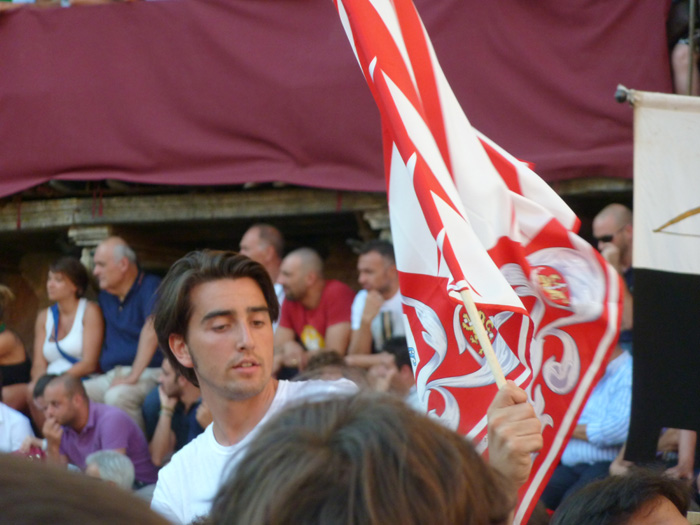 Droopy eyelids are the order of the day. 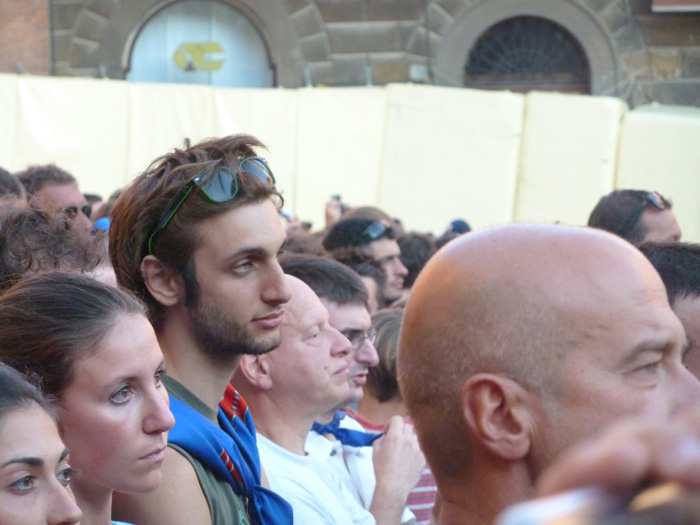 You see what I mean? You may be forgiven for noticing that I’m not looking in the direction of 50,000 other people at this moment. 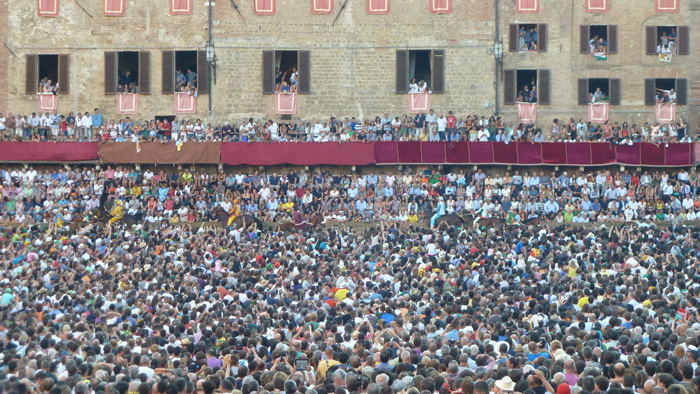 As the horses are parading up and down on the far side of the Campo, trying to get into the right order at the start line. 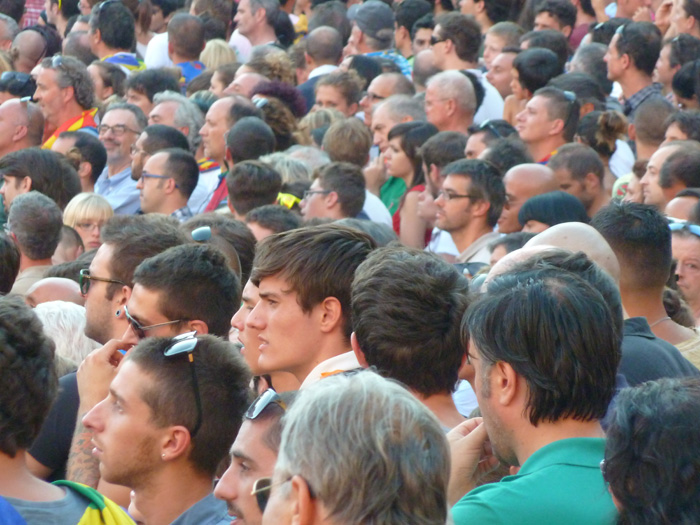 The tension was rising… 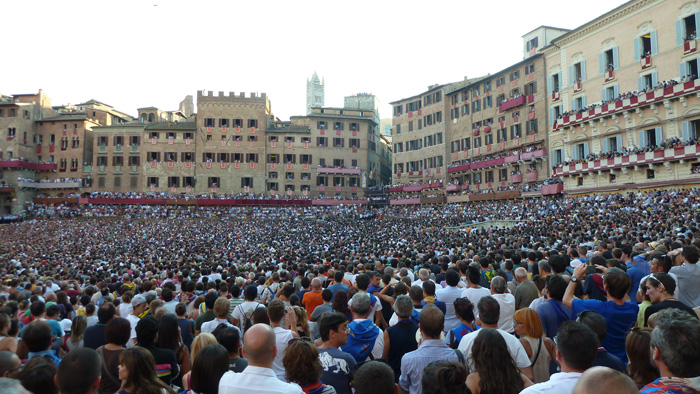 At the moment the running order is called you can hear a pin drop. A spine tingling moment as the huge crowd falls completely, utterly silent.

At last the horses are lined up and ready to go… 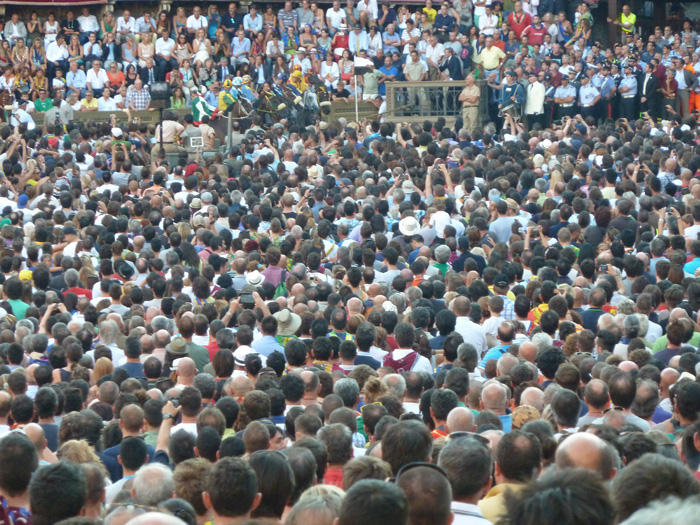 And they’re off. The whole thing is over in a matter of 90 seconds. 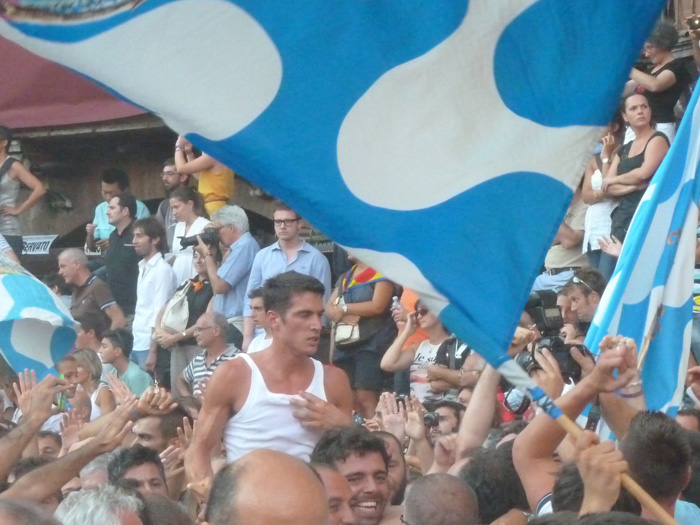 The winning contrada is Onda. Here’s the jockey on his victory lap.  The excitement was almost too much for some: 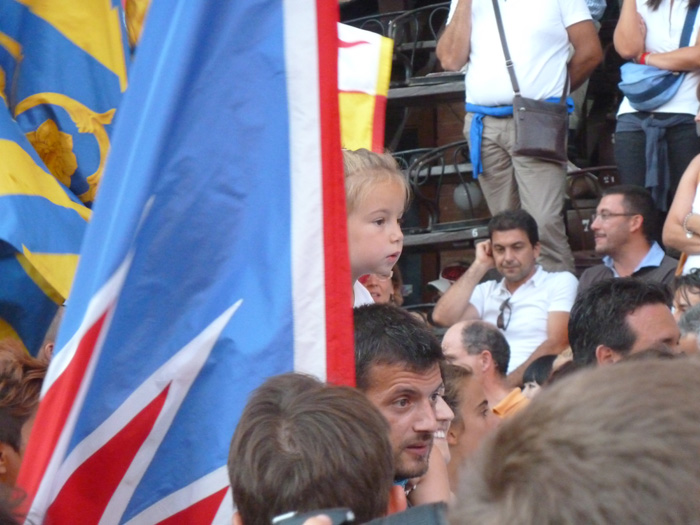 While others revelled in it: 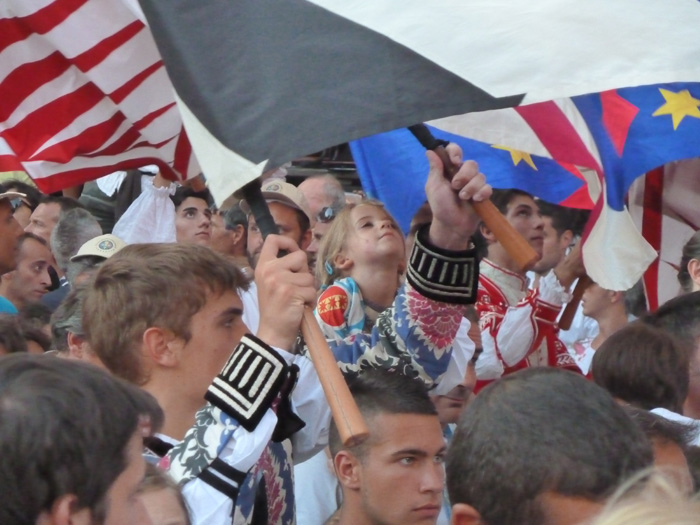 Insanely chaotic scenes follow as all the contrade parade around the square. 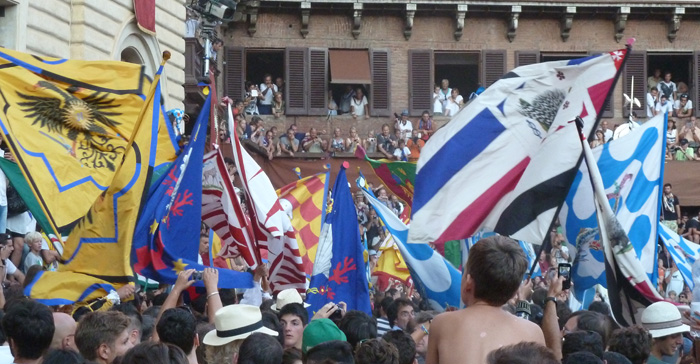 Luckily for the readership of this blog, our main task was not entirely complete: 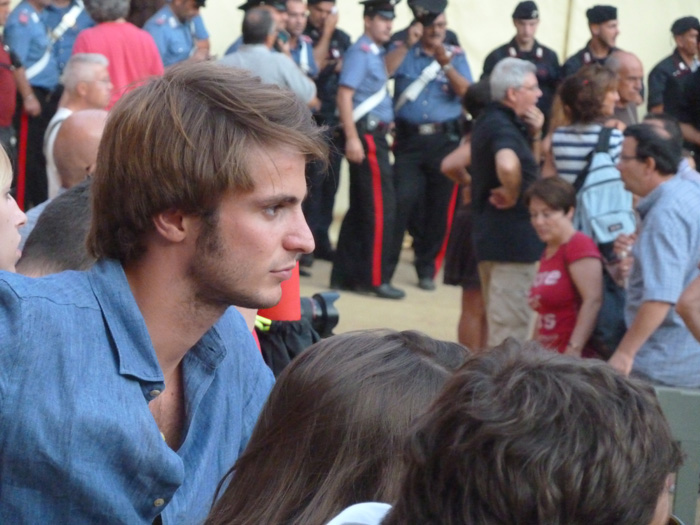 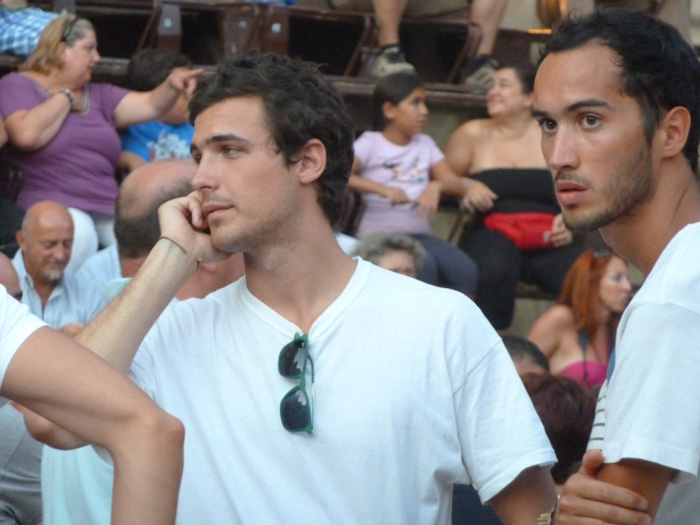 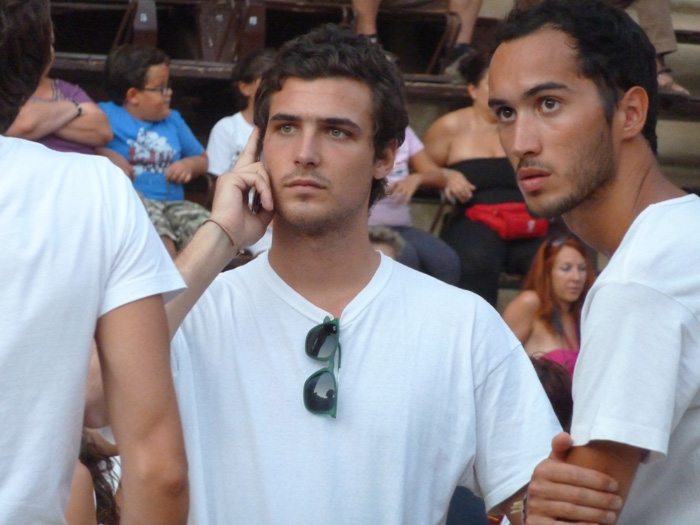 “I’ve been nominated the hottest spectator at the 2013 Palio by the readership of Ben Pentreath Inspiration?” 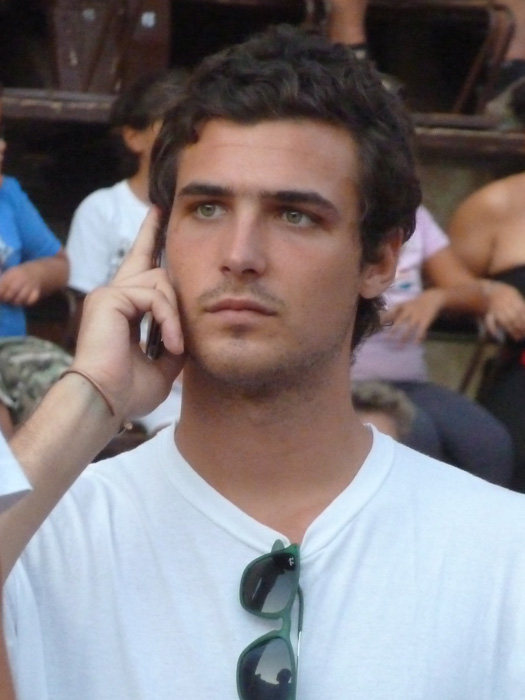 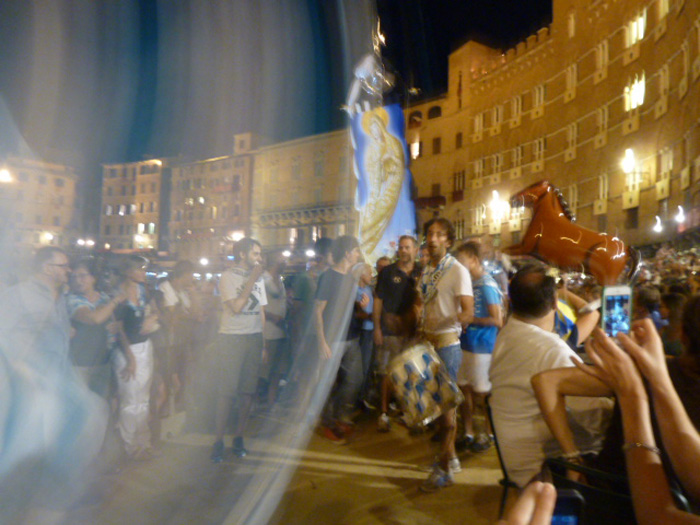 The evening settled in to the same restaurant where we always go, for the same superb pizza, and beers, and victory parades long into the night. The best things in life really don’t change.