For those American readers who’ve never heard or understood of weird British politics, let me explain a few things. We’ve got two main political parties, just like you. Labour and Conservative. Both of which turn every year more and more American; in style, image and lack of substance.

But unlike you, we have a lot of minor ones. Because no one wants to vote for the major ones, the minor ones are rattling the cage of politics right now. Right now, in fact, they hold the balance of power: our Coalition government is a mix of two groups (the Conservatives, who have teamed up with the Liberals) who, charmingly, pathologically hate each other, it seems to me, more than either of them hate the other side. Weird, but true. Are you with me so far?

Well, there’s a new kid on the block. They are called UKIP. In fact they’re a very old-fashioned kindof kid, but in the last 3 minutes they’ve been making rather a lot of hot air because no-one had ever taken them seriously before and suddenly they are… if not quite winning votes…  at least stopping the Conservatives from winning votes. Because they are almost more conservative than Conservatives, without necessarily being crazy religious gun-totin’ gay-hatin’ fruitcakes, like your Conservatives over there in the New World.

So all sorts of conservative folk have decided the Conservatives have let them down (by teaming up with those Liberals) and they’re going to take their vote elsewhere, thank you very much too.

UKIP stands for the UK Independence Party and for years they’ve stood on the basis of one thing only. They want Britain to get out of Europe. And they hate the Euro, and they really hate Immigration. What I’ve always found odd about this is that my gut feeling is that by far and away the biggest supporters of UKIP seem to be a variety of fat, rather crude, doubtless charming-under-the-surface-but-I’ve-never-quite-seen-it, retired English people who’ve decided to live their latter years in Spain and spend the whole time complaining about the friggin locals. Which, of course, they can only do because we’re part of Europe, otherwise they’d still be scrabbling about in the cold and rain in some desperate suburb of a northern city.

Of course, my dear mum threatens to vote UKIP all the time, but I wonder if she ever has?

My politics has always been pretty simple. Do unto others as you would have them do unto you. You leave me alone and I’ll leave you alone.  Let me do what I want in the bedroom and I won’t try and stop you from fox hunting or wearing a brass cross around your neck at work, if it really is important. You be civilised to me; I’ll be nice back.

Oh, and my second rule, is always try and look at every problem from the opposite point of view.  Clearly no good if you’re looking for a strong leader, but luckily I spend my weekends pottering around in my veg garden instead of deciding how to lead. It’s the politics of understanding.

Without wanting to get personal, I’ve only ever voted Labour in my life. Which is weird because if you looked at me you’d think I was a nice true blue Tory (that’s slang for a Conservative, for the American audience. You see, it’s all being explained here). Well, I probably am a true blue Tory, at least by nurture, if not by nature. Like: obviously I should want lower high rates of taxes and all? Yes, but I always think it’s a bit more… interesting… not to vote in one’s own personal interest. Don’t you?  Voting just for yourself seems, hmmm, rather narrow-minded.

OKAY OKAY I HEAR A COLLECTIVE YAWN, why de F**K is ben pentreath ranting on again?

Well, back to UKIP, if you will. 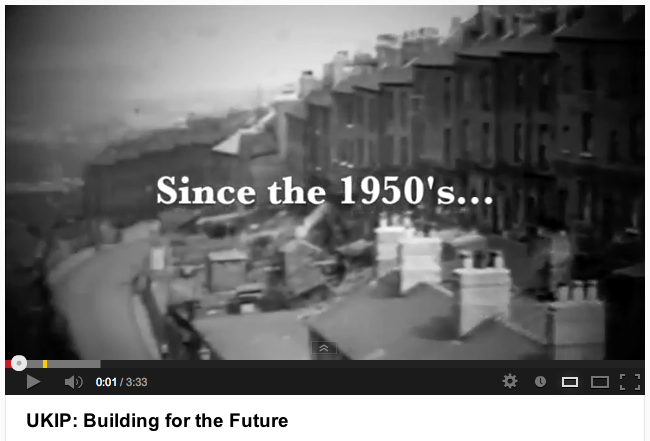 Yesterday, I happened to discover a rather weird video that some nutcase supporter of UKIP has placed on You tube.  At time of writing, it has 64 views. Obviously I expect that number to rise dramatically now that I’ve brought it to the attention of thousands of metropolitan sophisticates just like you.

Here it is.  If you’re in your office, please put your headphones on. The swelling soundtrack is critical to the mood of the film.  If you’re reading at home, please turn up the volume button.

Why am I so fussed?

Because 38 seconds in to this piece of drama, BUILDINGS THAT I HAVE DESIGNED OPEN THE FLIPPING FILM. HELLO!?!?!??!?!

As the dramatic music swells, the dreadfully-filmed video swoops around a group of houses called Woodland Crescent, that I designed years ago now, in Prince Charles’s development in Poundbury. The grainy film effect is slightly sinister, a little creepy. The score makes me wonder if by 1 minute and 7 seconds I’m about to witness some dreadful murder. No: we are just learning that this is how UK Independence Party wants Britain to look. 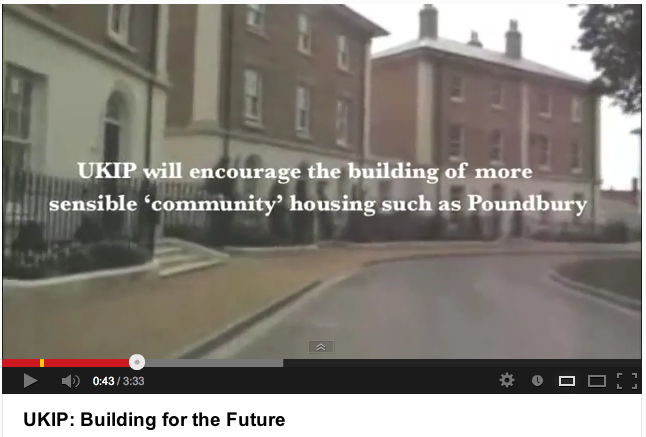 Okay, okay, I appreciate that once you’ve put a building up – it belongs to everyone. A fact that from time to time I think might be forgotten by one or two Starchitects, who I sometimes think are just designing for themselves. But nonetheless, this is rather taking it too far. At 1 minute 35 more buildings that I’ve designed (this time in Scotland) pop up. 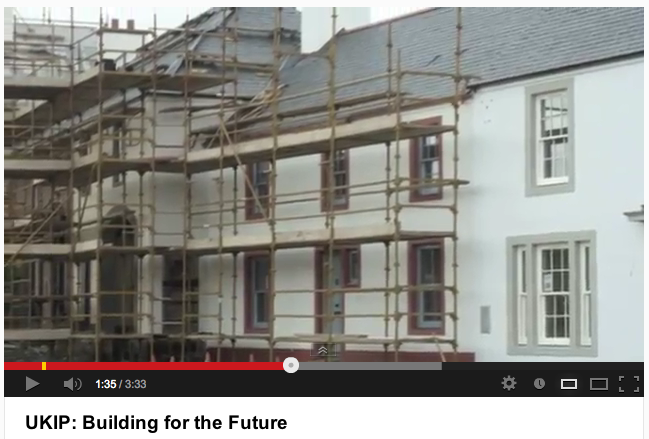 At which point, I couldn’t help thinking: GUYS, please leave me alone, if I leave you alone!!

So. I know that for centuries buildings have been political things. No more so than in the 20th century: Mussolini, Albert Speer, Stalin, I know, I know, Classical architecture is deeply totalitarian blah blah.  Oh god, even worse, then there are the counter arguments, about meaning in architecture, and 20th century modernists using everyone as little lab rats, and the fact that Greece was the original democracy…….. and…. well, you can see why I want to throw myself off a cliff when politicians and pundits start talking about architecture and vice versa.

For me, I just want to design a few nice houses. I want them to look nice, I’d quite like them to fit in, I want people to be happy there, I want them to be well-proportioned and well detailed and I want the people who are building those houses to feel a little sense of pride that they’ve made something worthwhile at the end of the day.  (I’m not sure that if you’re a bricklayer for a volume house builder you necessarily feel that).

What’s this all about? The trauma, perhaps, of finding out suddenly that I’m a poster boy for a political party that I think is a joke?  Needing to get a few things off my chest?  Or merely proving the rule that you should never drink 4 glasses of wine while composing a blog about politics one evening?

We had a good laugh about the UK Independence Party in the office this morning. But, in all honesty, I’d sooner they’d leave my buildings out of it.