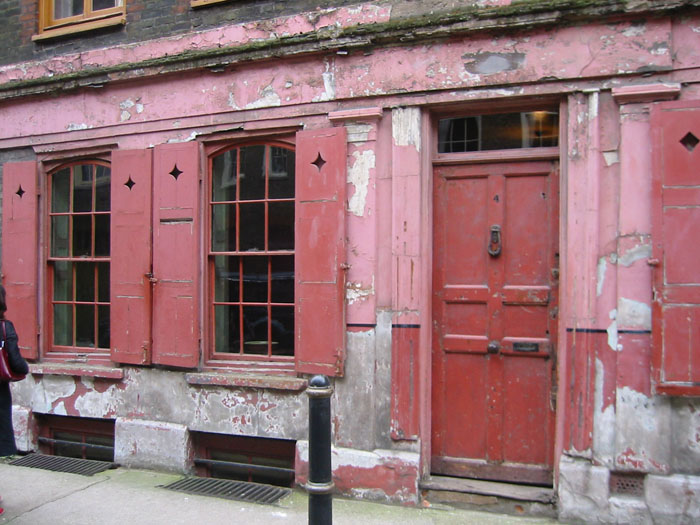 Do you have your own Spitalfields, and may I share mine?

I was young, eighteen, I guess, when I first discovered Spitalfields. I first went there to visit The Georgian Group, who I think were then housed in the old Georgian building that belongs to the Society for the Protection of Ancient Buildings that I think is still in Spital Square. In those days, I seem to remember, and I admit my memory is hazy, the Georgian Group was run by a wonderful person called Caroline Lightburn. She took a young me under her wing, and was very kind indeed.

In those days, I didn’t really know where to turn to find out more about the eighteenth century buildings that I knew that I loved. The Georgian Group was not a bad place to end up, I suppose, although a bigger bunch of oddballs it would be hard to find in London (or the world). But at the time… I would say, there was something about the Group that meant a great deal to me, and a part of it still will, for ever.

Having found my way to Caroline’s office, which I seem to remember being upstairs at SPAB, and having said our hellos, and chatted, I had an afternoon on my hands to explore, and I can still remember that earth-shattering moment when I turned the corner down the Commercial Road and saw Christ Church, that magnificent building I didn’t yet know was designed by Hawksmoor. Fournier Street was a dream, a revelation.  I don’t think I could believe what I was seeing; the ancient Georgian city, still there, preserved, alive, crumbling, and perfect.

Later, after four years at Edinburgh, I moved to Norfolk where I apprenticed with the architect Charles Morris, deep in that haunting area of Breckland on the Norfolk-Suffolk border. It was a curious choice, perhaps, when all my friends were moving to London, but it was here I learned my first faltering steps about architecture and what makes life happen. I lived in a tiny low-ceilinged cottage down a long un-made up track called Fen Lane, in East Harling, and lived a pretty reclusive time one way and another, and that might be a story for another day.

It was all very well (and it really was well) but I loved my weekends in London when I used to come down (not every weekend, but many) to stay with my friends then setting up exciting new lives after university.

Liverpool Street was my station of arrival and departure, from where it was a short walk to Spitalfields. So time and again, if I missed a train, I would find myself having a spare hour to wander around, maybe missing one or two more trains after that. It all feels a long long time ago, but I can remember it in some ways as if it was yesterday. Spitalfields then – and we are talking twenty years ago – felt like a place that time and tide had forgotten. The world of early 18th century London collided with crazy, hectic 20th century Brick Lane, and I learned that I loved each as much as the other.

Growing up young, and gay, and from a deeply conservative middle class background, wasn’t as easy then as it would be today. It’s funny how two decades makes a difference.  But when you remember that John Major was prime minister, Mrs Thatcher just departed… well, that makes one understand the different Britain we were living in, in those days.

So I won’t quite say that I lost my virginity in Spitalfields, because that wouldn’t quite be true, but it was certainly the first time I had real fun.  That would have been when I was 22 or 23, and by fun, I think I mainly mean no guilt afterwards.  Eugh, what is it with guilt – that most useless of emotions, especially when we’re young. (that’s what I mean by things not being so easy then). Well, the circumstances were a little random. And perhaps the fun moment was something to do with the early Georgian panelling, who knows…! haha. (Okay, Mum, perhaps it’s time to stop reading)…

Well, “whatever”, as they say. Time and again, I’ve returned to these, my favourite streets of London, watching the changes. While I was in New York, I collaborated on a wonderful house in Greenwich Village, with amazing Marianna Kennedy, whose beautiful Spitalfields townhouse features extensively in my book, and I well remember my first visit to her on Fournier Street. When I first got back to London from New York, I remember then spending a dream day re-acquainting myself with Spitalfields after five years away – the photograph above is one of a handful that I took within a few weeks of arriving back in London in the autumn of 2003. I think that was with my friend Monica, and Mo, is that you just sneaking into the edge of the photo?  I am sure it is.

When Bridie and I set up the shop, 4 years ago almost to the day, we spent hours trawling the markets and dealers, and Bridie was and is still deeply connected with those little streets and lanes of Georgian buildings.

Why this stream of memory? Well, I think, because nothing has ever excited me more that what happens in the shop starting next week. 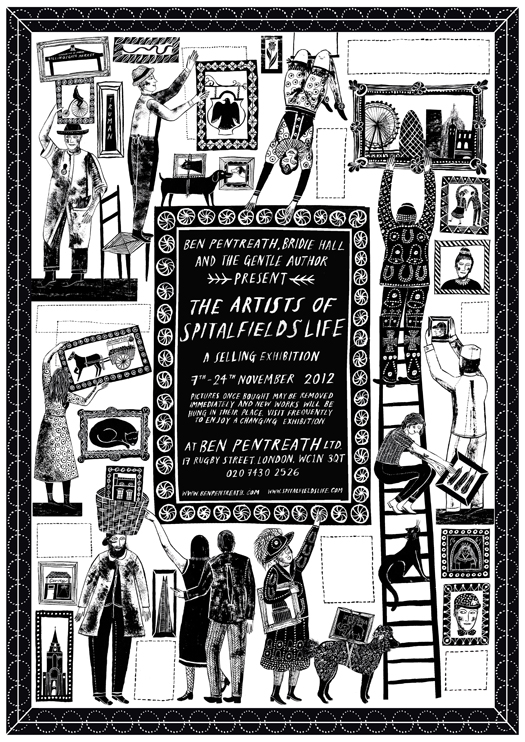 It really is the most exciting moment for me since Bridie and I started up the shop, a summation of everything I think is important about London today. And in thinking about it all, and how much I love Spitalfields, so beautifully, lovingly and richly chronicled by the Gentle Author every day, I hope you don’t mind my sharing my own Spitalfields Life?

Every day, The Gentle Author will be writing in detail about the artists we are showing, so be sure to visit that wonderful blog even more often, and we hope very much that you can visit the shop again and again during the show.

The exhibition opens in a week, on Wednesday 7th November, and in the early evening we have a tremendous private view to which everyone is invited. The show runs until the 24th and pictures may be removed as soon as they are bought. New works will be hung in their place. So there will be many treats for the frequent visitor.

If you are not able to get to London, we will show as many pictures for sale as possible on-line, including the wonderful poster designed for us by Alice Pattullo shown here. Bridie has set up a wonderful Spitalfields Page here, with more pictures going up daily.  Call Bridie in the shop for more details or help if you need it.

I really hope to see you during the show. And if you’ve read this far, thank you again for indulging me on my trip down 1720s-meets-1990s Memory Lane. 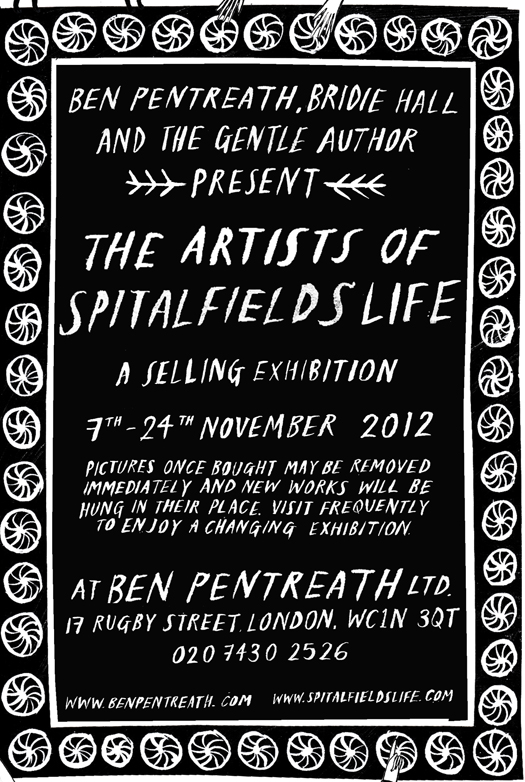