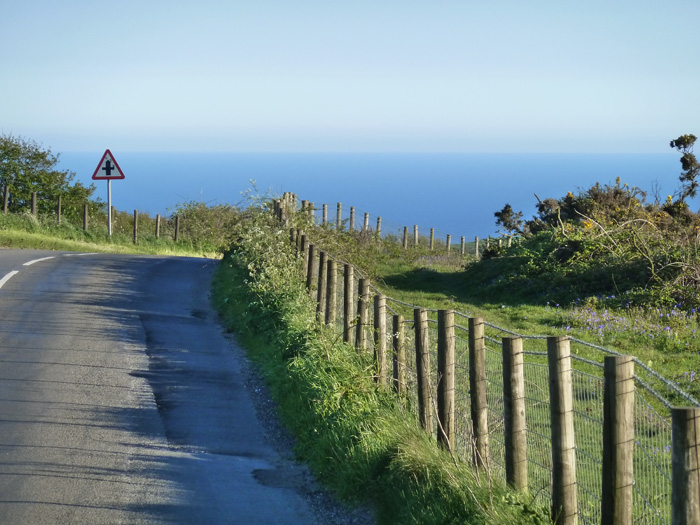 I went for a spin this afternoon – in my Morris Minor, which, to be honest, has been a little under the weather for months. My friend and neighbour Mike has done a brilliant job gradually nursing the elderly car back to health. From time to time we wondered if we’d ever get there. Every time we (by which, I mean, of course, he) fixed something, something else went wrong.

There was a party in the village today – my landlord’s daughter was married yesterday and there was a fantastic celebration lunch this afternoon, in the brilliant sunshine. It was good to get over, because I’ve been feeling a bit reclusive if I’m honest. Everyone seemed to be there. ‘You’ll never believe it’, said Mike, when I said hello to him for the first time in weeks. ‘Your flippin car is fixed. She’s all working’.

So this afternoon, after my second deep long sleep of the weekend (I don’t know what this is about but it’s half past nine and I’m already lying in bed writing this blog… I don’t think I’ve slept so much in months) I set off for a quick drive… with minor trepidation. Last summer the car had gone through a phase of driving beautifully and then suddenly. . . . . . . . . . . . . dying and gliding to a complete stop without warning. Twice, conveniently, with friends in the passenger seat, and three times, weirdly, at the same roundabout in Bridport (that’s why my little Morris has never been to Bridport). Modern cars are charmless, but reliability has its merits.

But it started first time and we were off. The car took the hills without trouble. I’ve never known the engine work so beautifully. At which point, you realise entirely why a mechanical idiot like me likes playing around with an old car. I just love this car.

Coming back from Dorchester, I swung up on the back road via Hardy’s Monument. The air was bright – the views east and west along the coast incredible.  Turning back towards the Bride Valley, I drove through the westerly haze, sunshine streaming over the Valley of the Stones, whose upper reaches were carpeted with a sea of bluebells and gorse. I pulled in to a field gate and jumped out to take a photo or two.  I am never one to miss a bloggortunity.

It’s at moments like this that I realise quite how much I am in love with West Dorset, and I am guessing you might be able to see why. 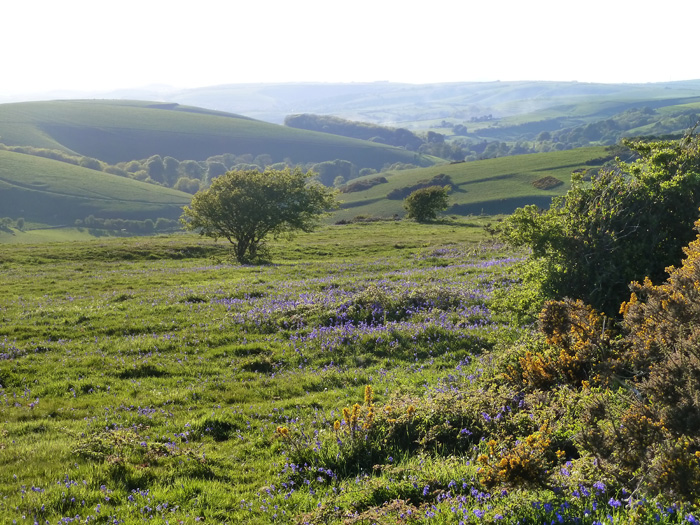 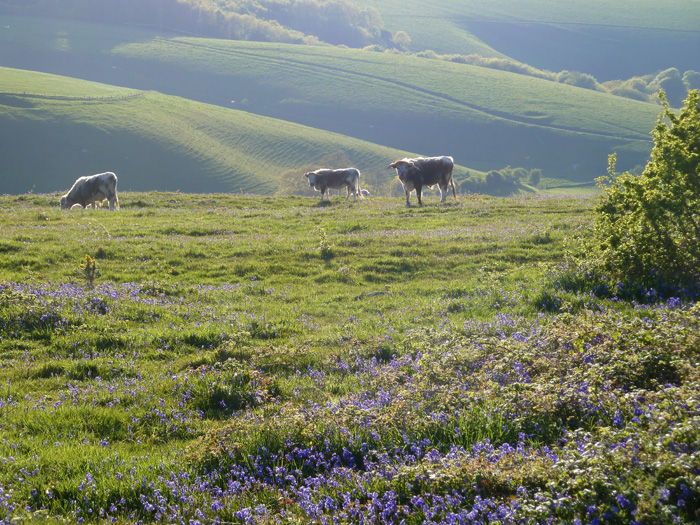 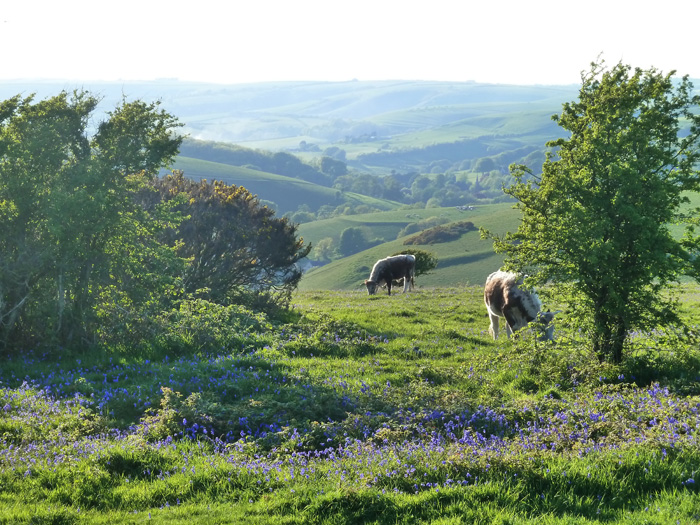 If you can spy the church steeple, that’s where I live. I think you can see my copper beech tree just beyond. 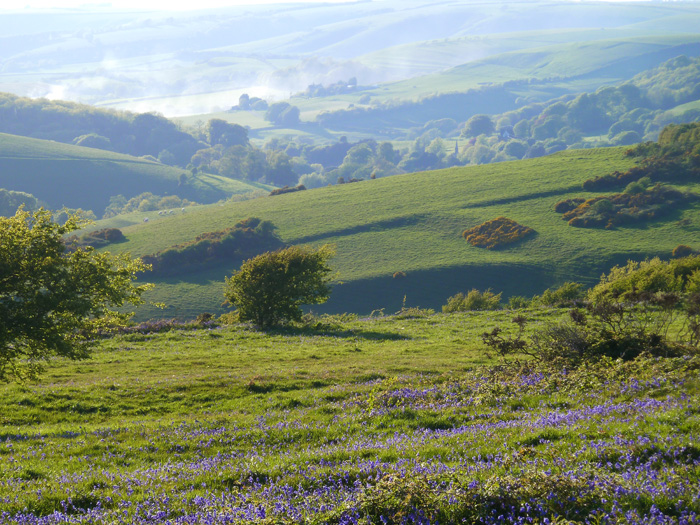 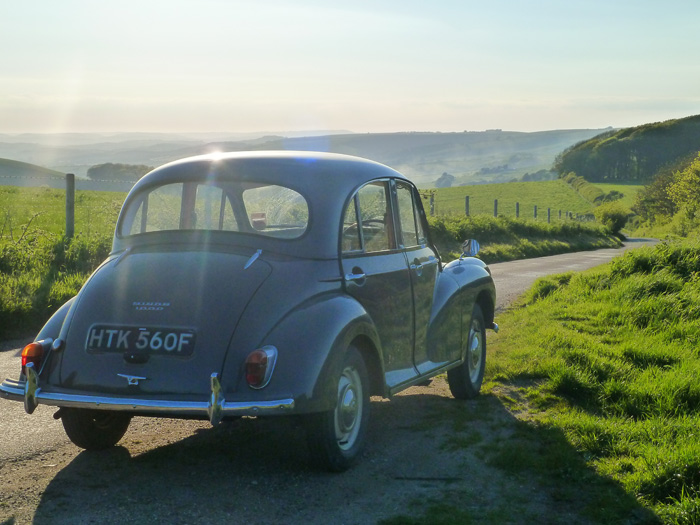 Well, it’s not just the car, or the valley, or the views – it’s my friends and neighbours, and the quiet, inevitable, rhythms of seasons that curiously I think I recognise all the more acutely since I first started writing this blog.

Today, I pottered around in the veg garden for a few hours. Everything is very behind. It’s no surprise, I guess… there was a frost on the ground this morning. Such a cold spring. As I was digging, it occurred to me that working in a vegetable garden is a good indication of how to get on with things generally. ‘I just don’t know how you do it all‘ is a phrase that I hear rather frequently these days. ‘By not sleeping’ I ruefully reply – which is perhaps why I’ve spent most of yesterday afternoon and most of this afternoon fast asleep, who knows? But actually – that’s not the reason. It’s because I think over the years I’ve become fairly good at dealing with things in small doses. That’s how you get them done.

That’s why I love working in the vegetable garden. You see results.

I weeded the paths and beans and potatoes. Then I tackled one of the beds, which was full of weeds. It turned out that half the weeds were nasturtiums, self seeded, and opium poppies, whose delicate papery grey petals are one of my favourite things in the garden. So they survived while thistles and what have you did not. I planted out my broccoli seedlings that wend their long way through to next winter. They live under those basket things, in case you’re wondering. I’m not sure why, but I’ve just found  they get brassicas off to an excellent start. 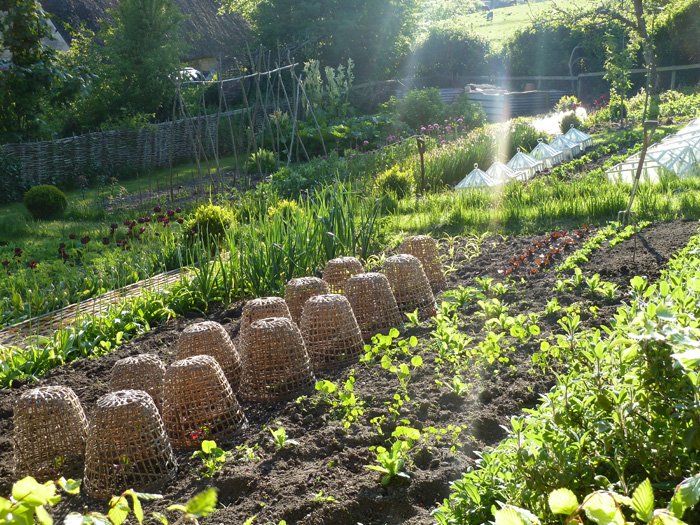 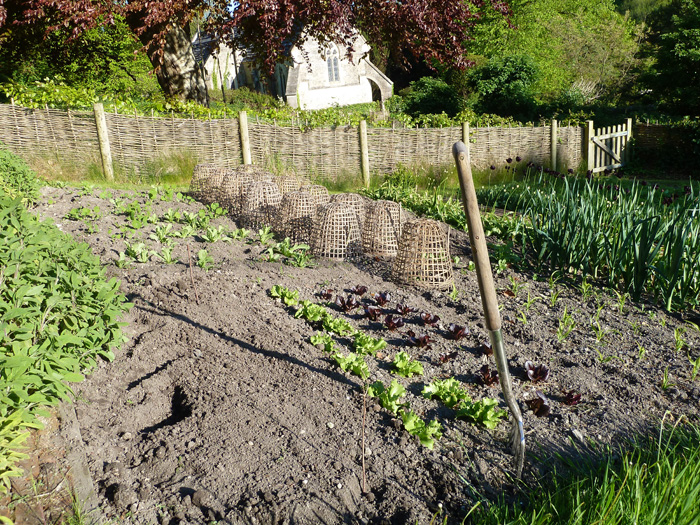 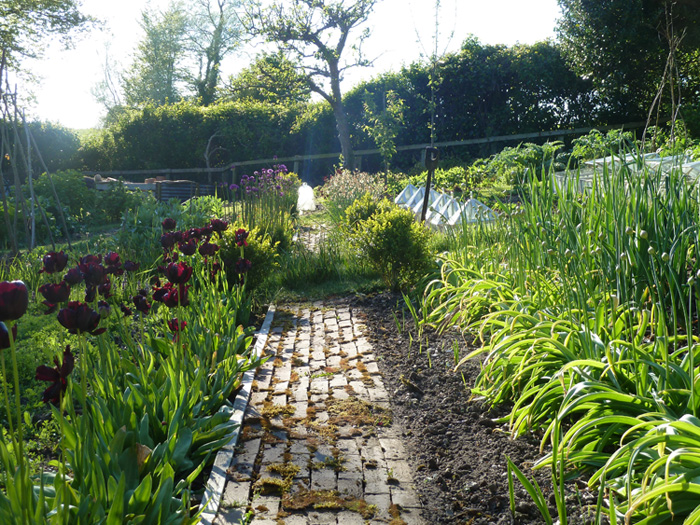 But not everything got done. And that’s my point. It’s a question of picking your task. And then realising that everything else can wait for another day. 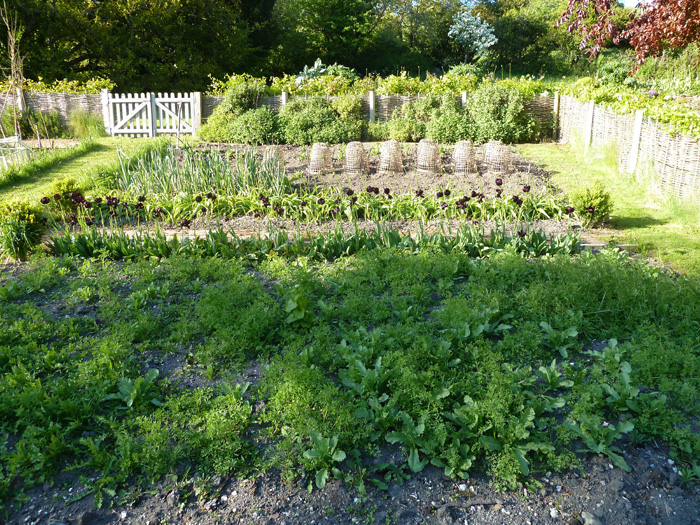 See what I mean?

Every weekend my desk at the Old Parsonage looks a bit like this. 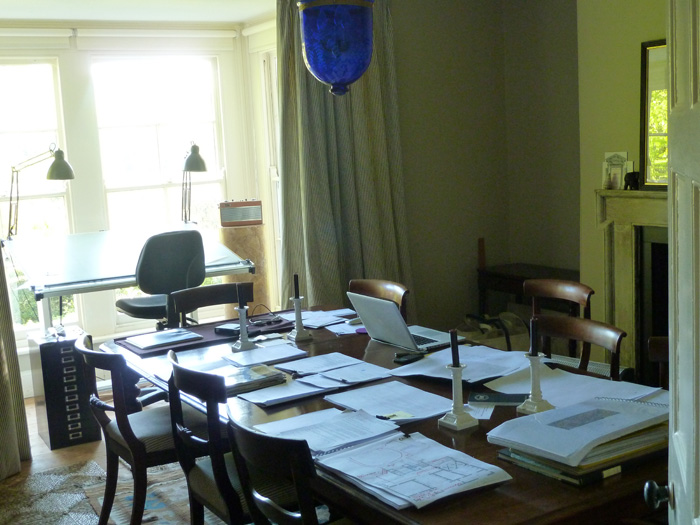 Hmm. Not as appealing as the garden, I admit. And let’s face it, I’m never going to get through it all. But I get through some, and that’s enough.