A Statement of Intent 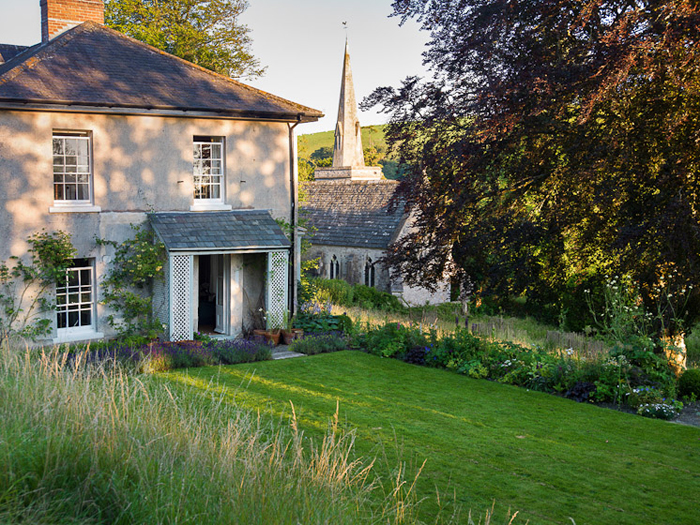 I got home on Friday evening to find an unusual letter from someone who’d read the article in the Saturday Telegraph about the Old Parsonage a few weeks ago. 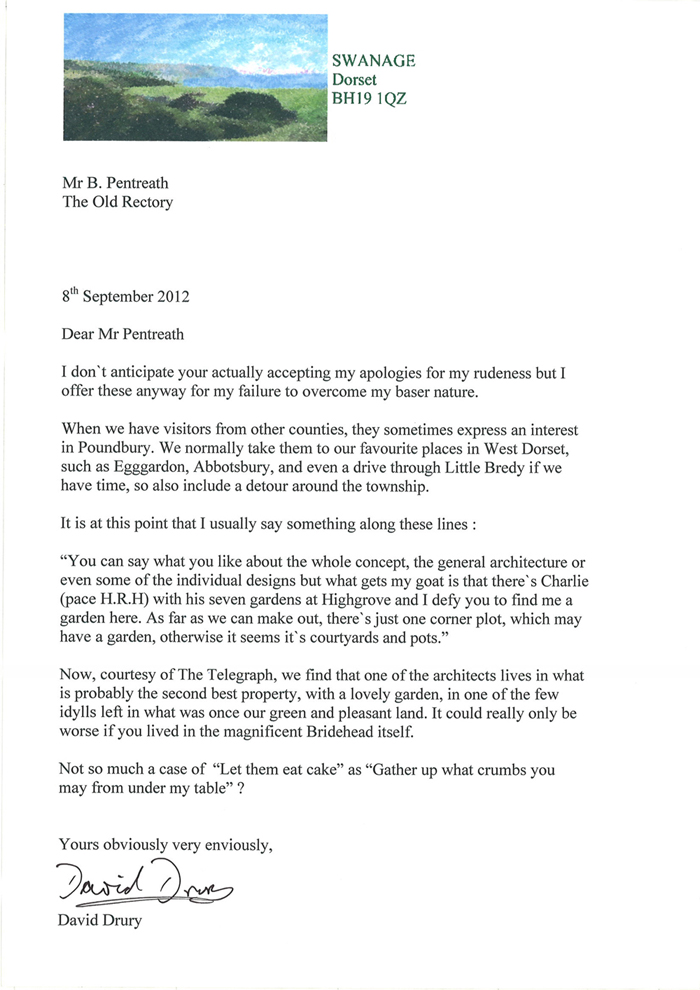 I don’t often write about architecture on this blog, or what we do in the office, but I thought you might be interested this exchange.  And you might have noticed in the last few weeks that we’ve reorganised our website so that the master planning, architecture, and interiors branches of our small and close-knit team here in London are now all on show in the same place.

It’s a strange mix of things; I suspect that there aren’t that many urban designers who spend some of their time interior decorating, or many decorators who get involved (as I do from day to day) in the finer details of roads, kerbs, bin stores, drainage runs and street lighting!

A bit unusual; but I guess it’s a question, for me, of thinking about things in the round.  Whether placing a new building in an urban layout, or a chair in a room – things either feel comfortable and right, or they don’t. I guess we might call it ‘design at every scale’.

As you will see a lot of our work is quite traditional in appearance. I tend not to think about it too much; I just want to make places that look nice and feel right. Sometimes that means more contemporary; generally, for me, quiet tradition.

One of the projects we spend a lot of time with is one that from time to time generates a bit of controversy; the Prince of Wales’s development at Poundbury, in Dorset, which started about twenty years ago, to provide a model for a different way of building new houses in Britain. People tend to love it, or hate it, and it was of course with Poundbury that the letter above was concerned.

Anyway, poor Mr Drury; I rather doubt he was expecting this reply!

I arrived home yesterday evening and found your letter which I enjoyed, striking as it does a nice balance between tongue-in-cheek and critique.

I am not quite sure if the critique is of me or of Poundbury itself, but I think the latter, and I think mainly to do with the sizes of gardens, and probably the density of Poundbury as a whole.

I think there is some truth in what you say and although Poundbury is full of very keen gardeners and is centred around a thriving garden centre, it is probably not a place for those who prefer large plots of land like you find in a village.  You may not know about the extremely successful allotments, of which several more are being planned and constructed at the moment, or about the regular farmers market which brings local food to the residents once a fortnight.  And of course there is a massive park and sports field being constructed, and for those who like the countryside there are walks from the front door in each direction.

Also on the plus side you can walk to work (1200 people work in the businesses in Poundbury every day, and about 35% of these employees live within the development itself); you can walk to shops, supermarkets, cafes and a pub, and it’s a short cycle or electric bus ride to Dorchester.  So, you could, if you chose to, live in Poundbury without a car, or certainly without driving other than for leisure reasons.

The interesting thing is if it was all spread out and built to the low densities of conventional suburban housing estates – which is actually what large gardens mean – the businesses would lose that crucial foot trade and would ultimately fail.  As soon as people get in their car they are able and tempted to drive wherever they want to buy cheaper or larger, namely Tesco. Hence the rise of giant out of town shopping centres that so spoil our open countryside.

If it was all spread out as normal, too, the employment would be in a massive business park which would be shut up in the evenings and which everyone would drive to and from; the shops would be in a mall, and the leisure centre would be, well, in a multiplex in Poole. The common denominator between all these? Cars.

Here in the village, ironically, despite the beauty of the place, we are all utterly dependant on cars for all our daily needs. I have to drive to buy a pint of milk or a newspaper let alone anything more substantial.  We feel this very much in the snow and ice when the valley is shut off and no-one can get in or out.  And the elderly, or young people who are not yet allowed to drive, feel this particularly strongly, totally dependent as they are on other people to drive them around for their every daily need.  The village here, despite its absolute charm and beauty, can be quite an isolated place.

It was very interesting to me that when I first moved here I met a couple who had lived here for a  few years and were about to move into Poundbury.  They were sick and tired of the driving and being cut off by the weather and not being able to walk to a shop.  I see Chris and Carol a few times a year in the village as they still sometimes come out to our social club evenings, and they absolutely LOVE living in Poundbury. They enjoy the social life, they enjoy having close neighbours, and they like living in a warm modern house that is nonetheless well-designed and in a nice street. And they like having a smaller garden!

As you will know from reading the Telegraph there is a chronic shortage of housing in the UK. This is not, as so often put about by that newspaper, entirely the result of immigration.  Sadly, it is quite largely to do with divorce and the commensurate rise in single households, but most of all, it is actually caused by dramatic increases in life expectancy that we have seen in the last 5 decades, and by changing social habits whereby younger people like to set up home earlier.  (Interestingly this last trend has recently been reversed because young people can no longer afford to buy houses).

Whether it is a good thing or not, therefore, we probably need to build more homes – not least to replace the absolutely dreadful housing stock that is the legacy of so much development in the 1960s and 70s.

This is a hard task to do well and the strange thing is the harder one tries to do it right, the more criticism one can attract. In a funny sort of way, if Prince Charles had no interest in architecture, and the Duchy had sold the Poundbury Estate in 1987 to a volume house builder, people would probably have been sad to start with at the loss of open countryside but as the anonymous brick estate grew they would have shrugged their shoulders and moved on.  Approaching Dorchester from the west you would today see a sea of 2 storey brown tiled roofs with no chimneys and no skyline, hemmed in by the bypass and probably given a noise buffer from the road consisting of some large perspex panels with black crows painted on.  There would have been no employment, there would have been no shops, there would have been no social infrastructure apart from a (probably now failing) club building, and there certainly would have been no affordable homes on site.

And no–one would have complained at all, which I find amazing.

I doubt your visitors would express much interest in visiting such a place either.

Poundbury is a very unusual project to work on. It is an experimental project and it certainly doesn’t get every last thing right.  But we are trying very hard, and in particular we are constantly trying to learn and to improve. Recently the Duchy has made enormous commitments to achieving better architectural quality and I hope the latest phases of the development, the South West Quadrant, are beginning to demonstrate the results of that commitment.  Recently, in the part of the development that I and my colleagues have just been working on, and which obtained planning approval this month, we have also listened carefully (amongst other things) to the criticism about garden sizes and have created a number of plots with considerably larger gardens than we have seen so far – without upsetting the carefully crafted mix of house types, sizes, and employment use that I have described above. Hopefully this will make you happy.

It certainly isn’t a place for everyone, and because it is quite a strong ‘cup of tea’ it tends to be a place that people like or dislike with some passion.  I’m afraid I’m a bit exhausted by all that debate and I tend to spend my life just getting on with things as best I can.

Your letter sort of implies that because I rent a nice house with a beautiful garden I should not be allowed to design any small houses for anyone else.  I am not sure if that’s what you are saying but I think it is. I am afraid I don’t think that’s a logical position; in exactly the same way that I don’t think it is true to say that because Prince Charles has a large house and inherited wealth, he should not have a concern for the built environment, or indeed for people less well off than him? Which you also imply, but I don’t expect you really mean.

It is true that I’ve made certain choices in life and one of them was not to buy a house but instead to rent a place like this, which I could never afford to buy, but which I can afford to rent. Restoring the garden here has been and is one of my passions. I don’t do a lot of foreign travel and I make some sacrifices to make it all happen.  And, every single day, and especially this beautiful morning, I do wake up and thank God, literally, that I am able for a short period of my life to live in such a beautiful and wonderful place.  Believe me it does not go unappreciated.

In my life I have a passion to make things just a little bit better than I found them. In the complicated world of housing development, that’s a lot more difficult than it sounds.  If you look on my website you can see one or two other projects where we are trying to create what I hope will be beautiful, appropriate buildings in the countryside. After all, that is all that our much-loved towns and villages once were – new buildings in our green and pleasant land. I feel confident that we can continue to create places which people will find beautiful hundreds from years from now, but from time to time, the way things happen today in the “house building industry” do seem a bit stacked up against that.

I don’t often reply to every letter I get and I am sure this isn’t the reply you were expecting, but I have enjoyed writing it and I hope you have found some of the background to Poundbury interesting, and perhaps thought-provoking for your next visit.