….and we have the perfect way to count down to the big day.  The Victorian Advent Calendar!

An A3 sized advent calendar put together by our friend Alan Powers. 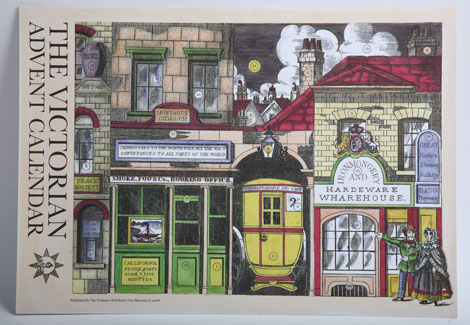 The Pantomime developed during the Victorian years as a Christmas entertainment in two halves, the second being the ‘Harlequinade’, a combination of slapstick, physical stunts, one line jokes and popular songs. A street scene was an essential component, and the stock characters, Harlequin, Clown and Pantaloon, would wreak havoc with stolen sausages and practical jokes. On cue, the scenery would change to fit the dialogue with hinged flaps on ropes, showing some improbable alternative reality beneath the surface of the everyday.

The Victorian Advent Calendar uses prints based on these performances, originally intended as scenery for children’s toy theatre productions – a craze which lasted for half a century from the later Regency time , and was kept alive up to the 1940’s by stubborn shop keepers such as Benjamin Pollock of Hoxton, whose name is now synonymous with toy theatres. The spirit of Christmas jollity and allure of the shopping street alive again in the Advent Calendar.

Available now in the shop and online under Necessities.