Well, it can only get better after Monday. As you probably all know, January 24th is officially the most depressing day of the year. (Well, actually there is some question as to whether it’s the 19th or the 22nd or the 18th, but this year I definitely vote for 24th). We’ve all run out of money after Christmas and it’s at least a week until pay day. The weather is at its gloomiest, we still only have February to look forward too, we finally broke our New Year resolutions last weekend… and frankly it couldn’t be more depressing.

To cheer us up then (and also to wish my flatmate William happy birthday) here is Mr Happy. Mr Happy, like me, is going to be 40 this year. Perhaps it’s the fact that we were both born in 1971 which makes me feel so very at home with Mr Happy.

One of my greatest regrets in life, if not the greatest, is losing the signed drawing that Roger Hargreaves sent me I guess when I was about 6 years old after I had written him a letter and sent him a drawing of my own. He sent me a drawing of Mr Funny in return. Somewhere along the way it got lost in a house move. Can you believe it?

Still, on the gloomiest day of the year, it’s nice to see a cheerful smile, and perhaps we should all try to follow the lead of Mr Happy today. 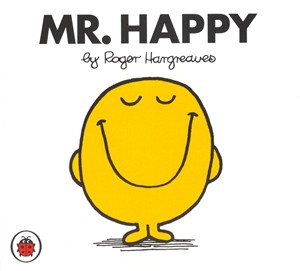