I’ve heard there’s bit of a heatwave in London this weekend… but I can’t help feeling it might have been hotter in Siena. We arrived on Thursday afternoon for the Palio—the first time I’ve been in quite a few years. The streets were thronged with excited Sienese making their way to the Campo… 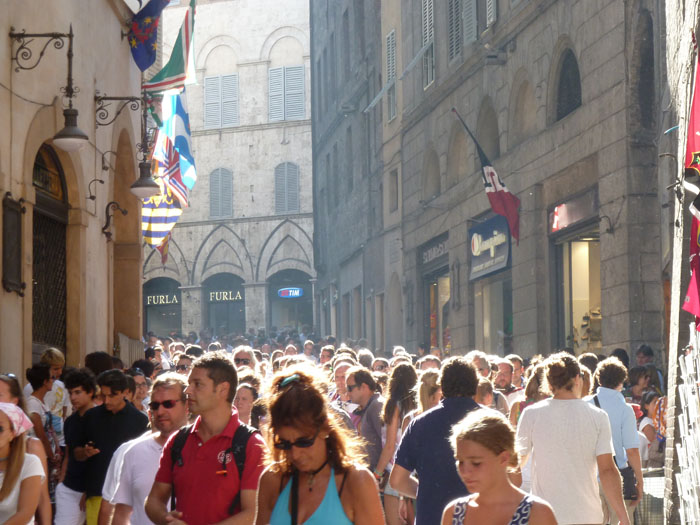 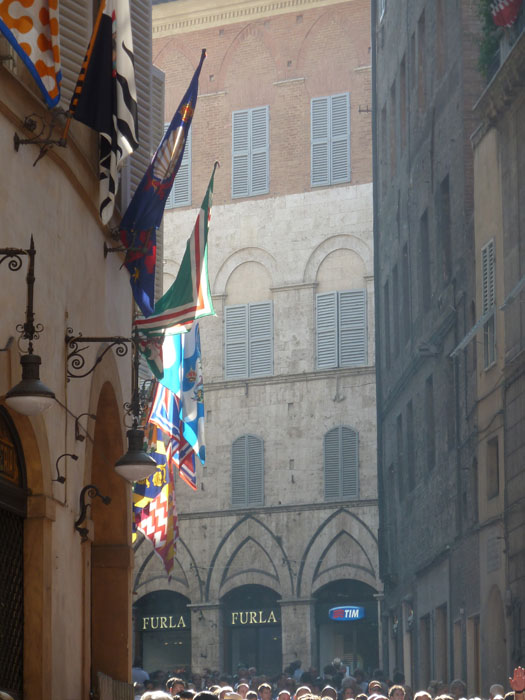 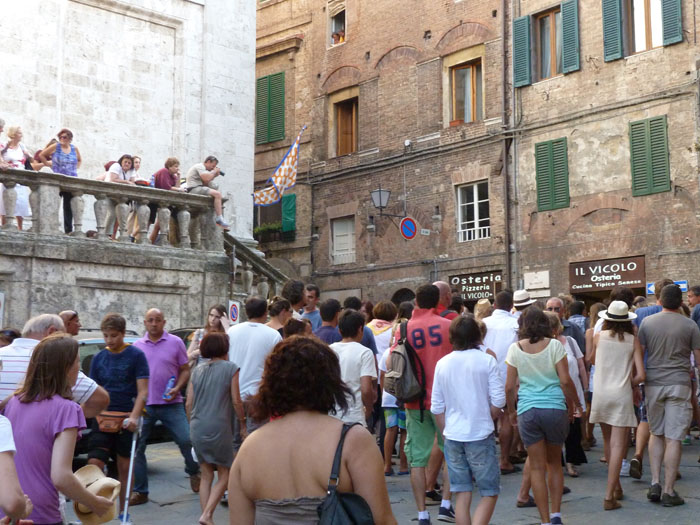 …like Pilgrims to some ancient ritual (literally, like pilgrims to an ancient ritual – the Palio has been running fairly much continuously since the 16th century). As you get closer to the entrance to the square, things begin to get a bit more crowded: 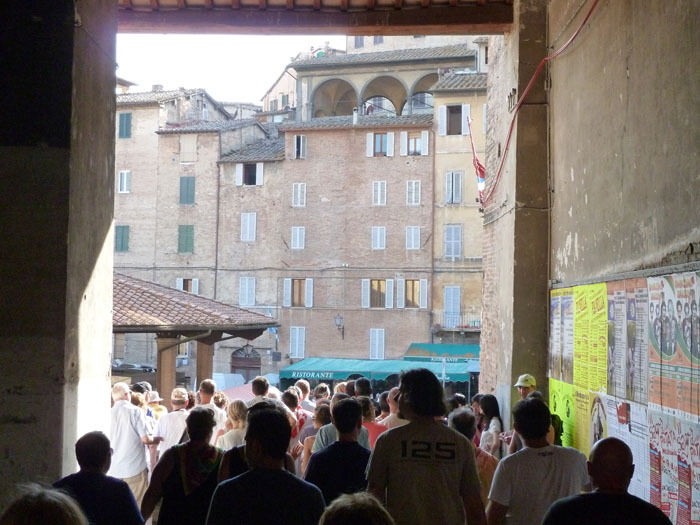 and then a bit more crowded: 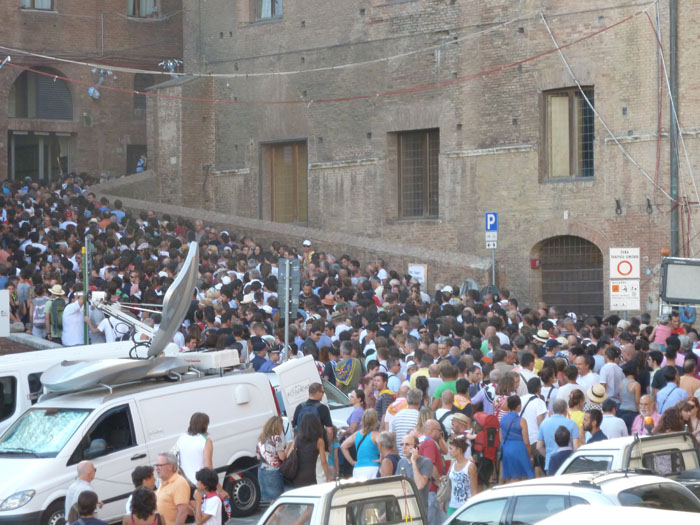 and then a bit more crowded still: 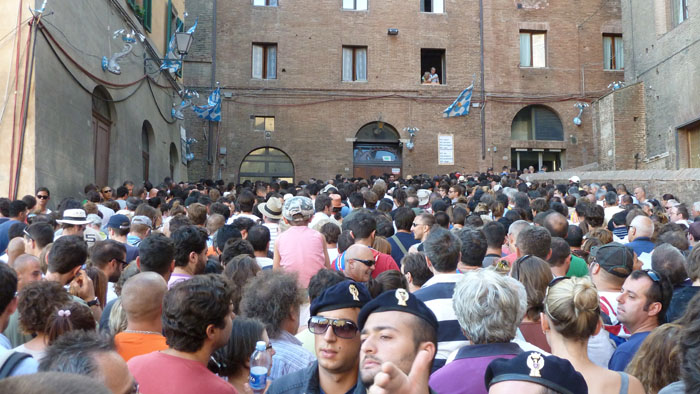 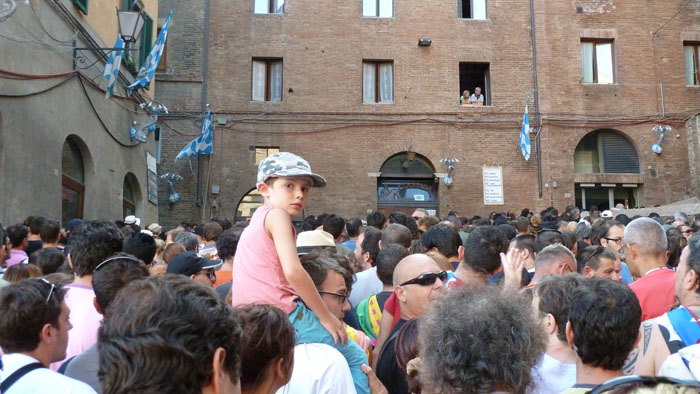 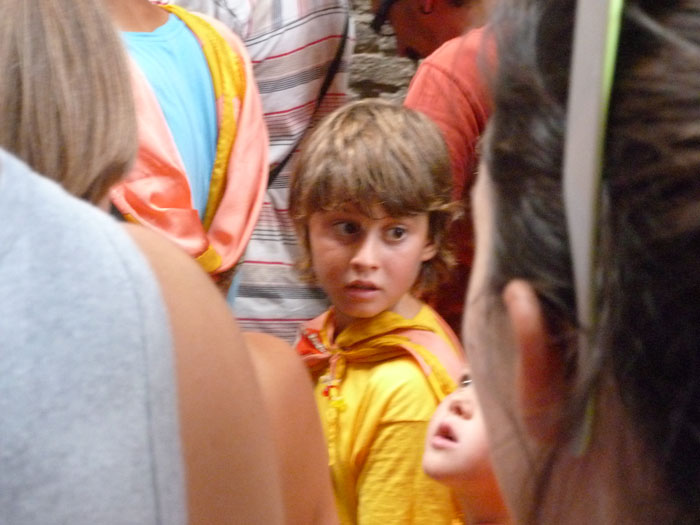 Demophobics (look it up – fear of crowds) need not apply. But then, slowly, we began to realise that there were one or two advantages to being in quite such close proximity to quite so many Sienese. 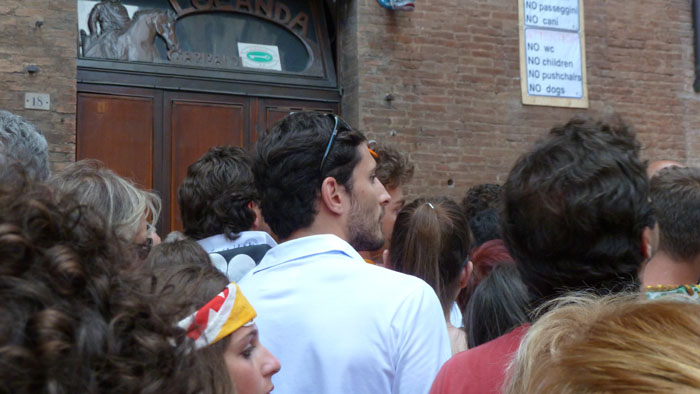 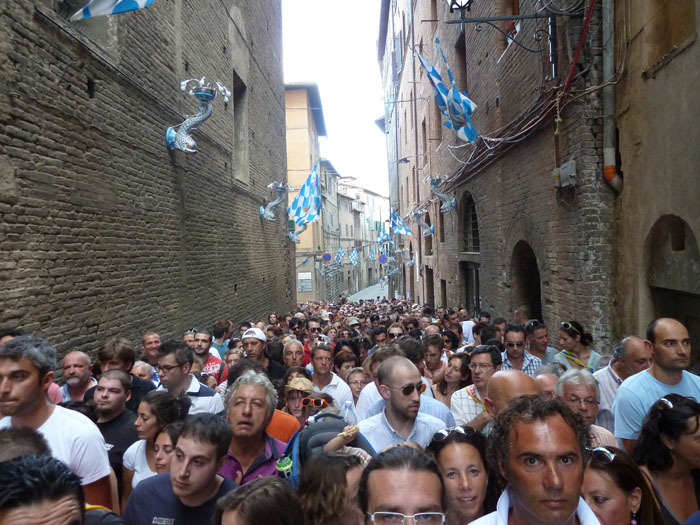 before bursting out into the magnificent, gently curving square 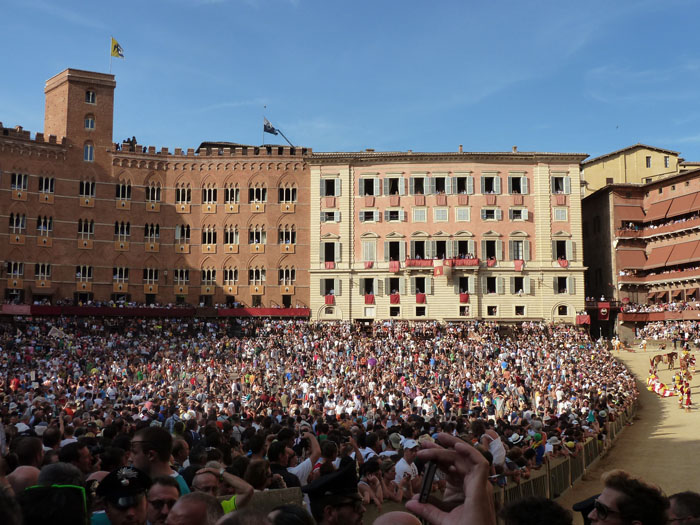 where I rather quickly realised that things were going to be getting very hot indeed: 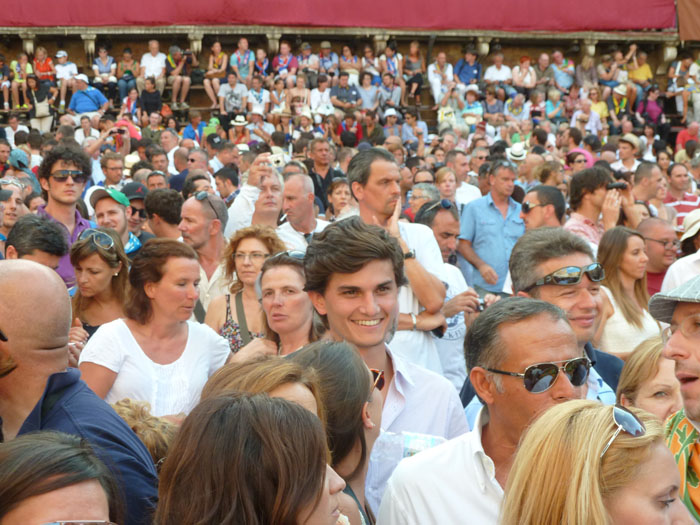 You might have thought it would be better to be on an upper window, 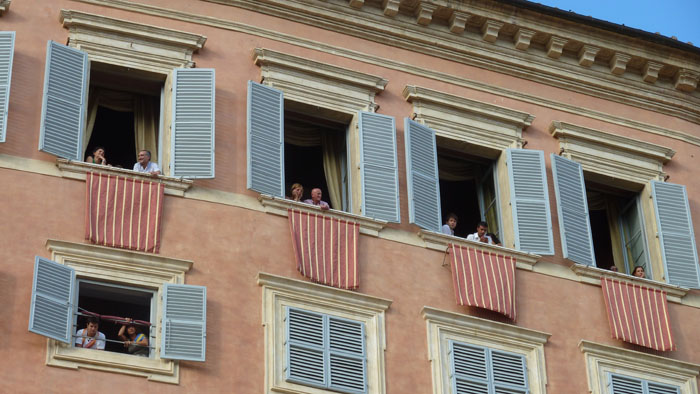 or even a balcony, 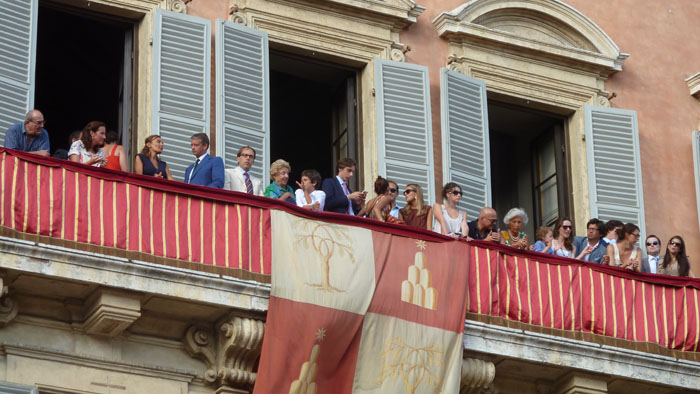 (a bit more stylish than the royal wedding)…

But then one can’t help but wonder if they weren’t missing the most exciting thing about the Palio by far. 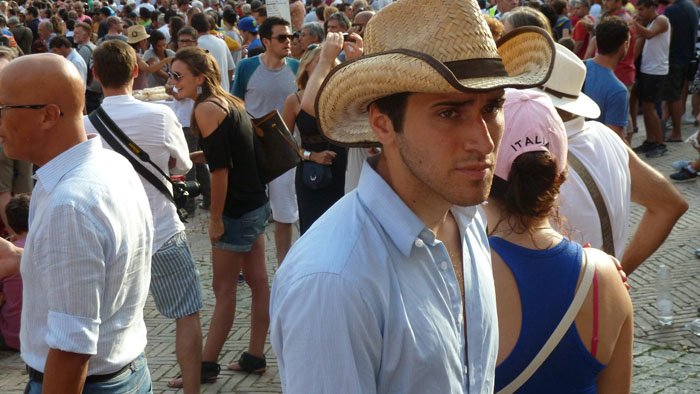 By this stage, it really was getting very hot in the Campo. See what I mean?

The festivities begin; I’m not sure they don’t put the Olympics opening ceremony in the shade (and I don’t think they cost £27m). 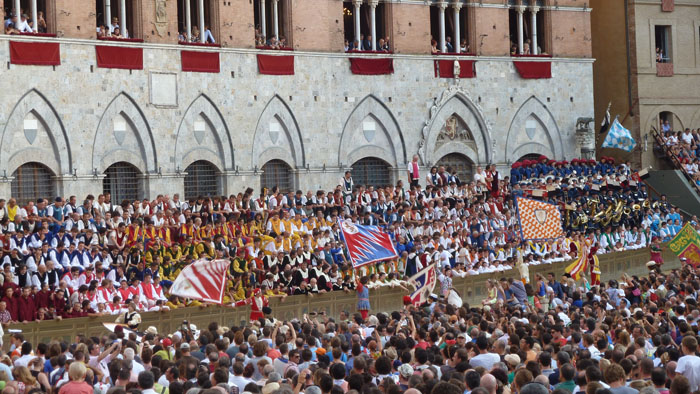 I love the moment when the running order is called… 70,000 people fall completely silent as the names are read out… you can hear a pin drop and the silence is electric. Then, in an instant, the horses are off and hurtling around the stadium, and the finishing gun is fired. Victory to Valmontone: 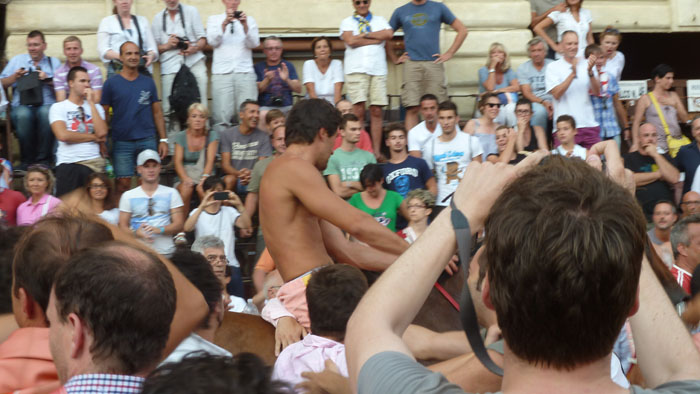 I am sure you won’t mind my borrowing this photo from the website demotix to show you a better picture of the winning jockey, Jonatan Bartoletti. 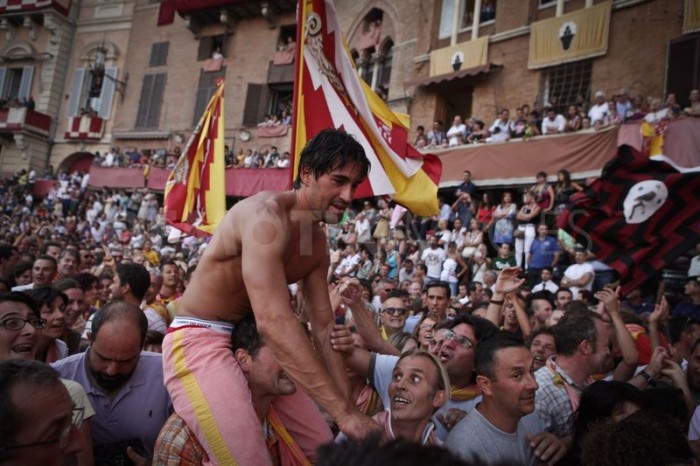 Um, still quite hot at this stage.

As soon as the race is over the euphoric crowds flood through the city celebrating a great victory. One or two young American girls were slightly distracted by something closer to home: 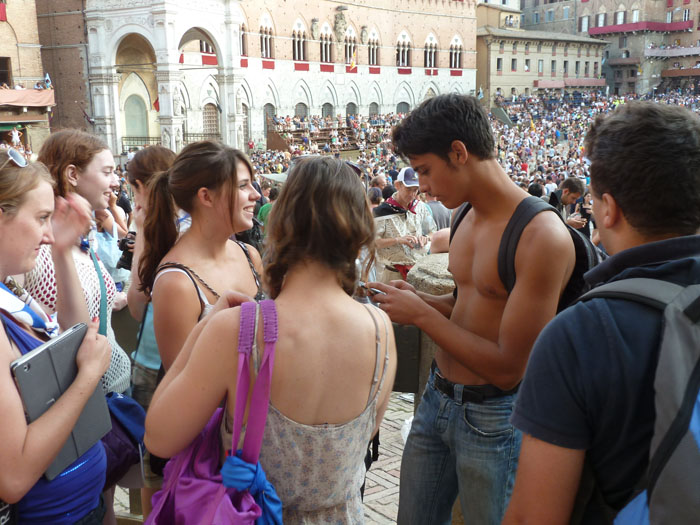 but our minds were completely on supper… pizza at our regular place… where there’s another excited rush to grab a table. 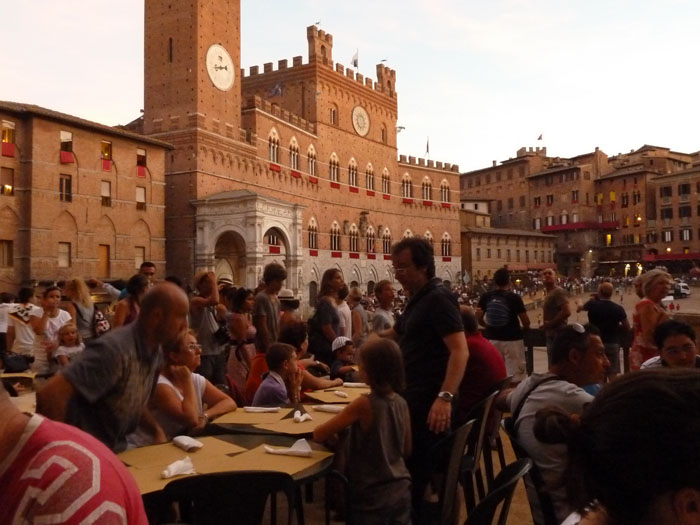 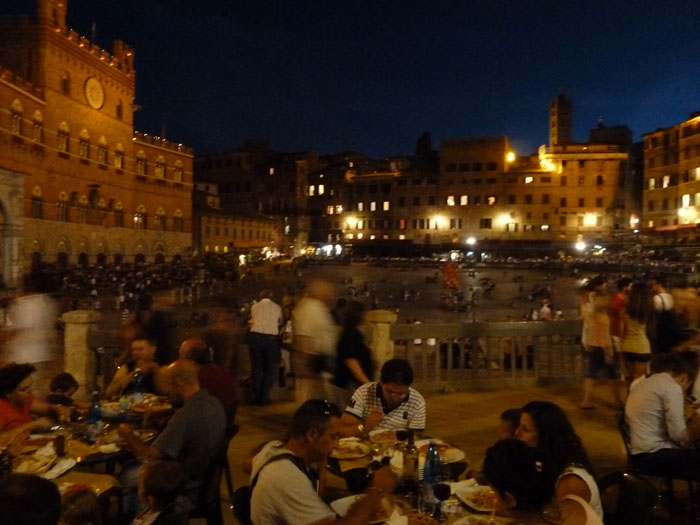 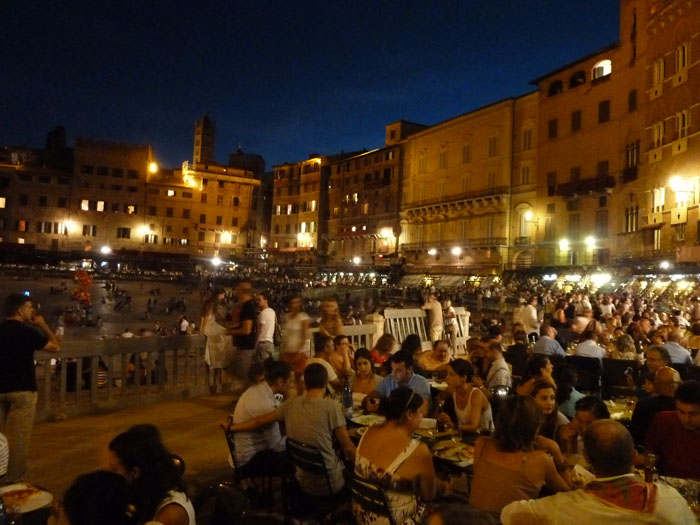 Okay, okay, the room with the balcony did look pretty fabulous as we left dinner. 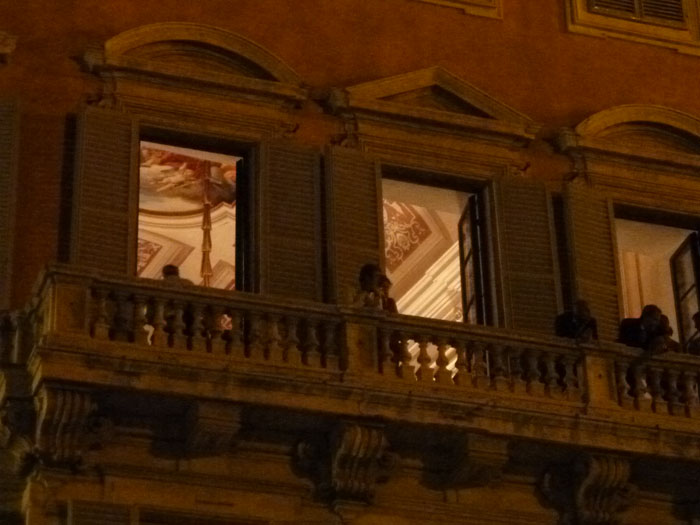 But you can’t help but wonder if the last word went to the couple who were passionately kissing in a side window of the same Palazzo. I might add, before you accuse me of being a stalker, in full view of 1000s of spectators, for about half an hour. But if that was your room for the night, I think you might have done the same. It’s hotter in Siena right now. 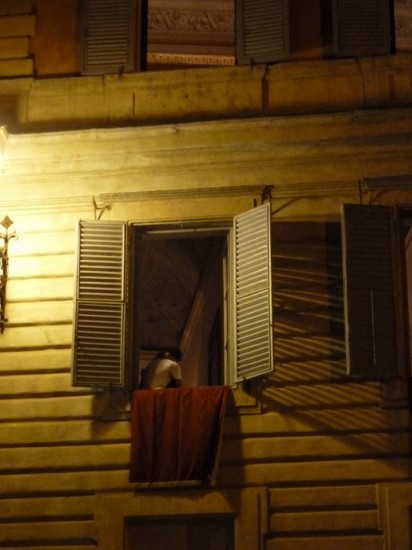