Would anyone like to help fill a gap? What is that obsessive compulsive pile of magazines in the landing outside my bedroom (see below….)?  Yes, I have spent a bit of time recently sorting out various piles of World of Interiors magazine. It appears that January 87 is the only one that I’m missing from the entire 1980s.

A few from the early 90s, and then that is it. I heard a programme on the Radio the other day about sad people like us. Completists. One man, who had been waiting for decades to find the last book in his collection of Dickens, was called by a book dealer to say he had found a copy. The customer declined to buy it… saying that he would lose his purpose to live.

I wouldn’t quite go that far myself. But if anyone would like to set up a WoI swap shop, please feel free to get in touch!

If you’ve walked by the shop recently, you will see that we now have piles of WoIs for sale (or exchange) if you would like to fill your own gaps. It only then remains for some happy person to complete the Index of every WoI ever published, and life truly will be, well, complete. 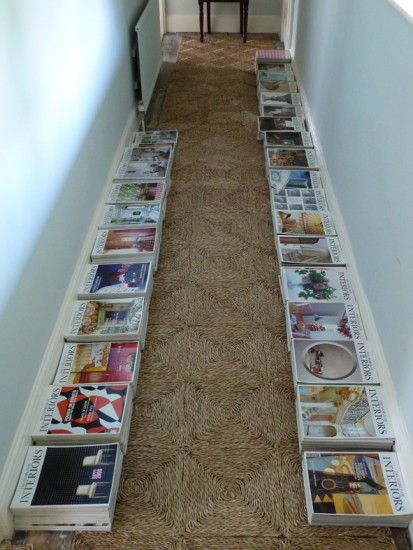