I’m never normally overwhelmed but on first walking into Peter Hone’s flat with Ben around five years ago, I was dumbstruck, my jaw hit the floor – I couldn’t believe what I was seeing. Peter was fussing around in the kitchen preparing coffee and the cake we had taken him and I suspect giving us a moment to try to take it all in. Five years on and many more visits later I still find it difficult to believe there exists a place so overwhelmingly beautiful, and it’s essentially a one bedroom flat in Notting Hill.

Our first visit all that time ago, when we were still fledgling shop keepers, was to see if he would like us to sell his architectural plaster casts. To our delight he was immediately onboard, and has been a great source of inspiration, education, mystification and entertainment ever since. Have you ever been to one of our street parties where Peter has rolled up in his Volvo, festooned in his plaster leaves, and given people an impromptu tour around whatever happens to be in the boot of the car?

The most recent visit I made to Peter’s was in aid of the second instalment of this, my Workroom Profile series, to try and get a better understanding of his world. 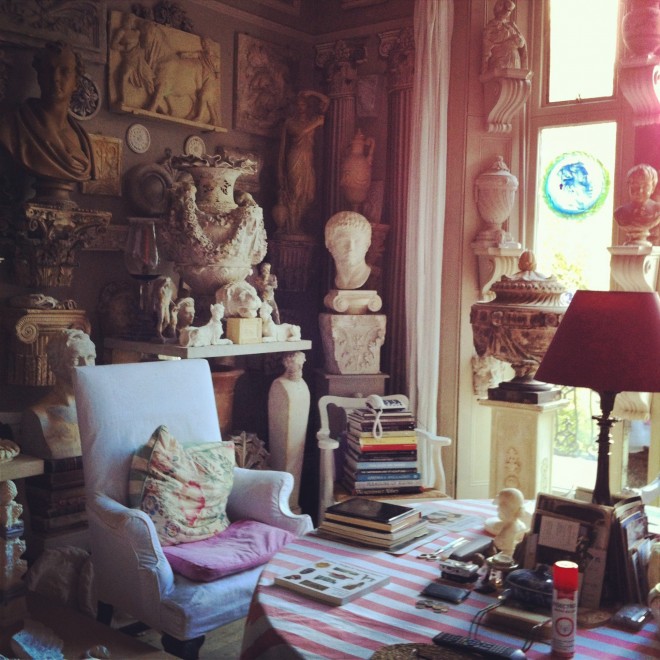 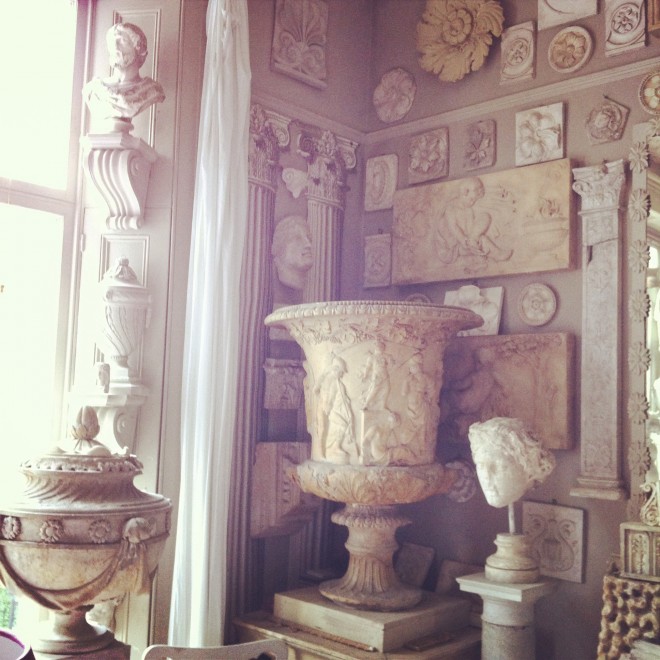 ‘Do you call yourself an artist?’

‘Well what do you call yourself?’

‘How did it all begin, Peter?’

‘In my very first job I had to light the stoves at 5.30 in the morning. A great range of stoves. And I slept in a stable lit by a star in a little iron bed that a horse looked over from behind one of those half doors. I was freezing but the lilacs were magnificent in spring. I started as a chef, icing cakes at Gleneagles, nothing’s changed actually. I’ve never really adhered to any particular style, I’ve just gone wherever the wind has blown me.’ 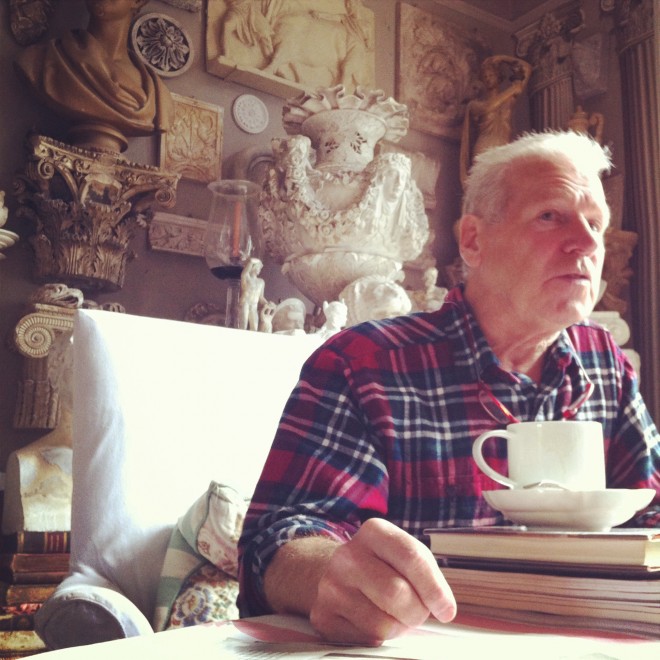 ‘My dear old friend David Ball had a great role in influencing my taste. We started up a shop in Debenham, Suffolk, dealing antiques – we didn’t make any money but we had a lot of fun. Next was a shop in Camden Passage, it was a riot. The stuff. The stuff! I was doing beds then, big four-poster beds. I sold beds to The Beatles, The Rolling Stones all the aristocracy and their mistresses, all of them.

‘After that I was a tour guide in Westminster, when Jacob Rothschild found me. Janet Shand Kydd was running his little shop but retiring. I was asked to go and see him for an interview. I said, “No! You come to me for tea!” He poured his coffee into his saucer and drank out of that but I didn’t copy him, you must be original.’ It was then Peter was given the task of organising and opening Clifton Nurseries, which he ran until he retired.

This is when the collecting of architectural fragments really came into its own.

‘With all this stuff all over the place, I decided to cast them,’ he explains. Author Peggy Reynolds was his first customer. ‘She had just written a book called Sappho, I made her a copy of my Sappho plaque, and that was the first thing I ever did.’

It carried on from there and it all happens in his flat: the living room doubles as his studio. He boasts a collection of over 3,000 casts, and has been known to say he’s taken more casts than a ‘Pea podder has podded peas in a pea podding factory’. 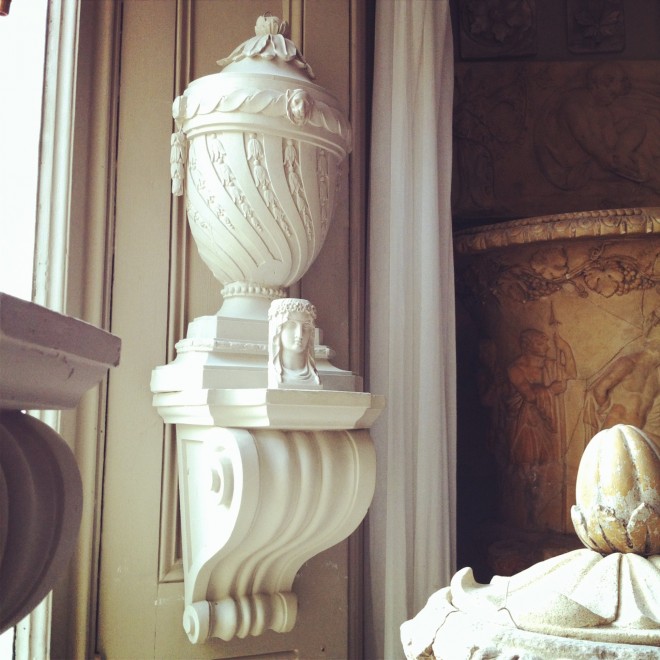 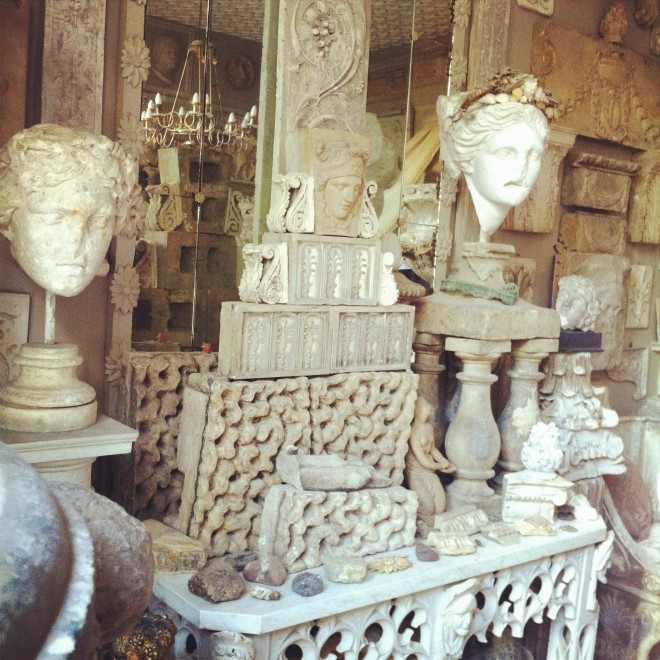 The latex moulds are by and large stored off site; when needed they are brought in and the wet plaster casts are stacked up and left to dry next to a heater under the dining table. Despite the rather overwhelming surroundings, the way he works is very regimented (and extraordinarily dust free). 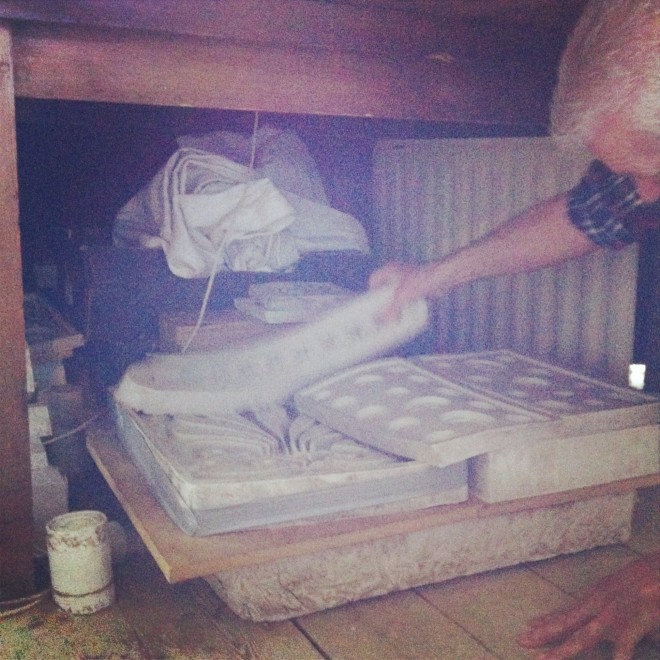 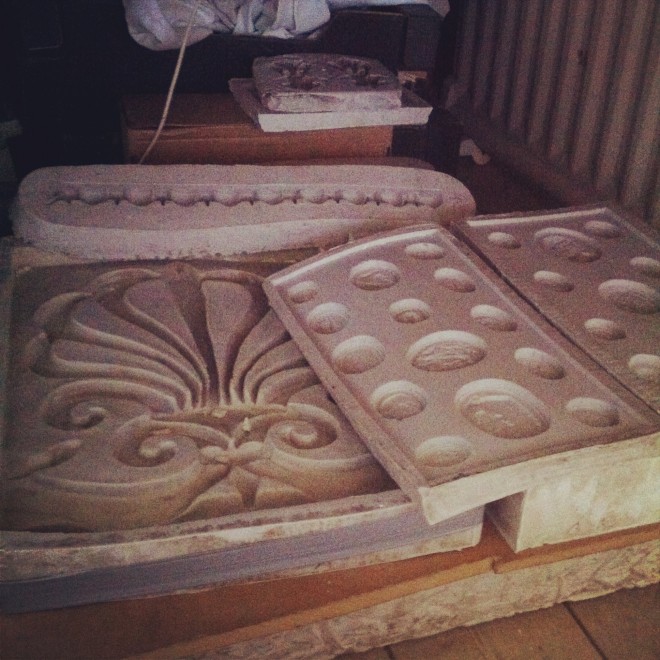 All those years ago we made a selection that we have carried in the shop ever since. From the bronze composite figs and walnuts he made while on holiday in France that fit in one’s pocket to the commissioning of a vast collection to adorn a wall, everything is possible with Peter Hone.

How can I not share with you a view of the hallway down to his summer bedroom. 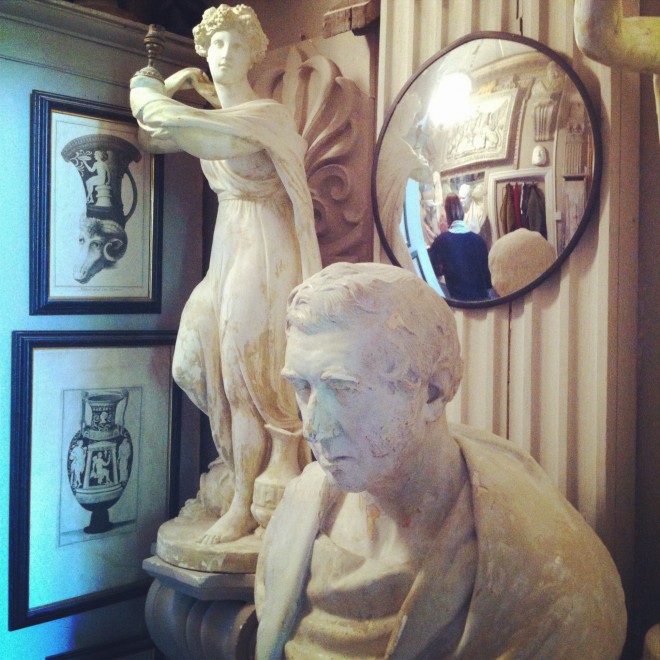 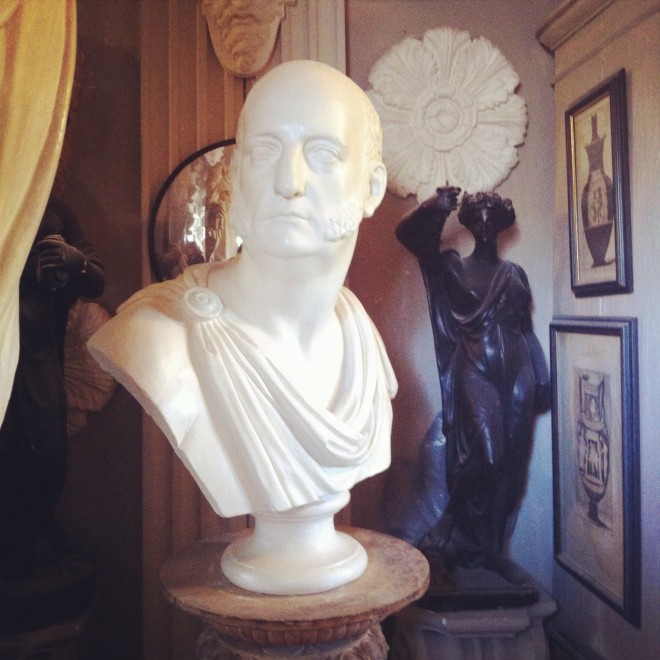 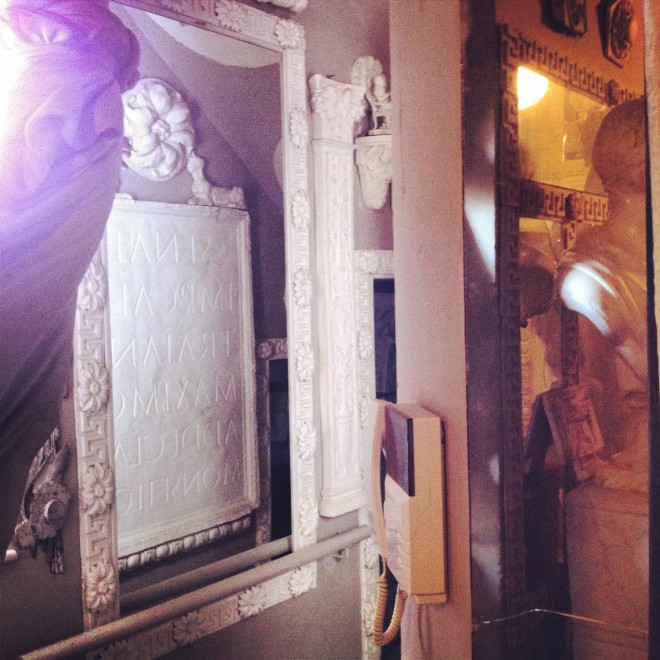 As a treat, here is a sneak peak at Peter’s summer bedroom. A perfect room we could happily never leave. 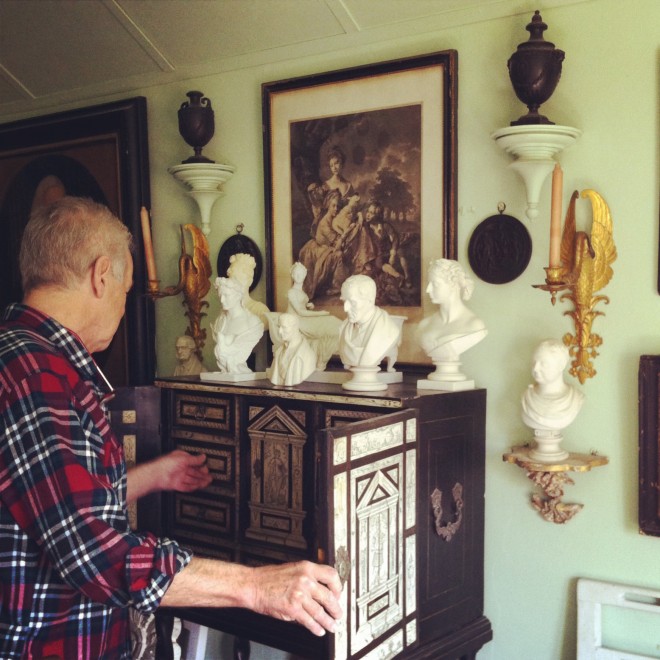 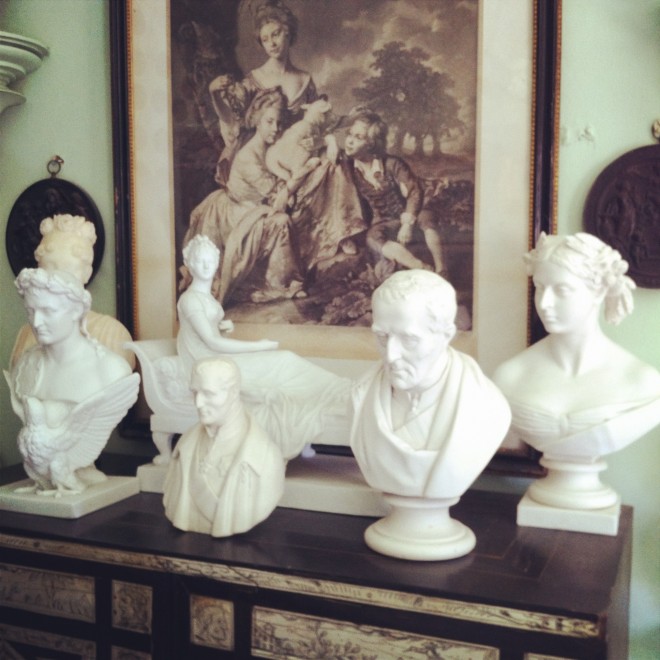 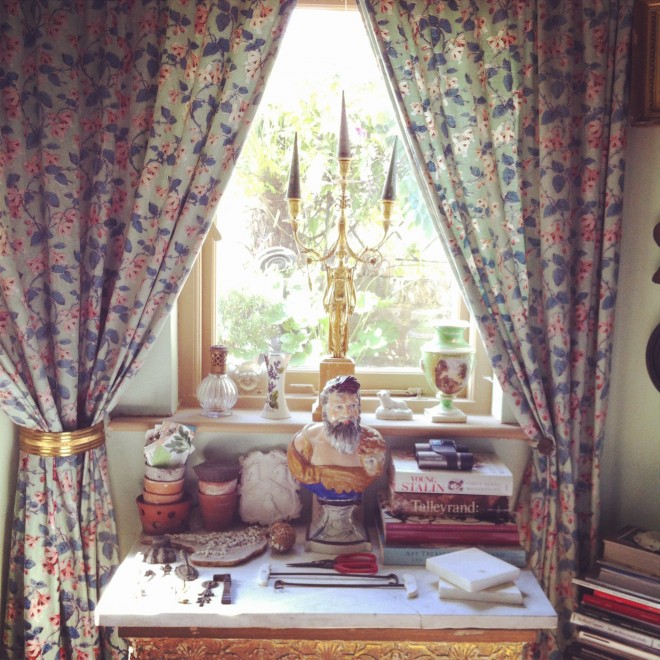 I hope you have enjoyed my second instalment featuring one of our many shop suppliers; do let me know if there is anyone in particular you would like me to profile. I have a good idea about who to move onto next, at the same time I’d like to show you the process that goes into conceiving a scented candle as I have two coming to fruition. We‘ll have to wait and see.

Looking back through the shop archives, I couldn’t help but share a couple of incarnations of the back wall of our shop, lovingly referred to as the ’Hone Museum‘. 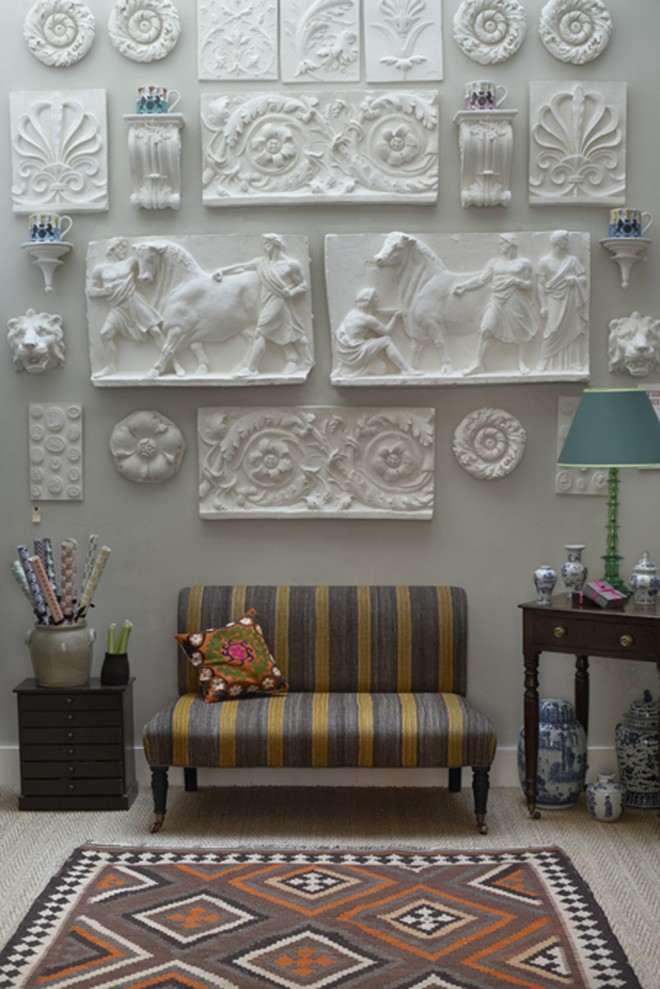 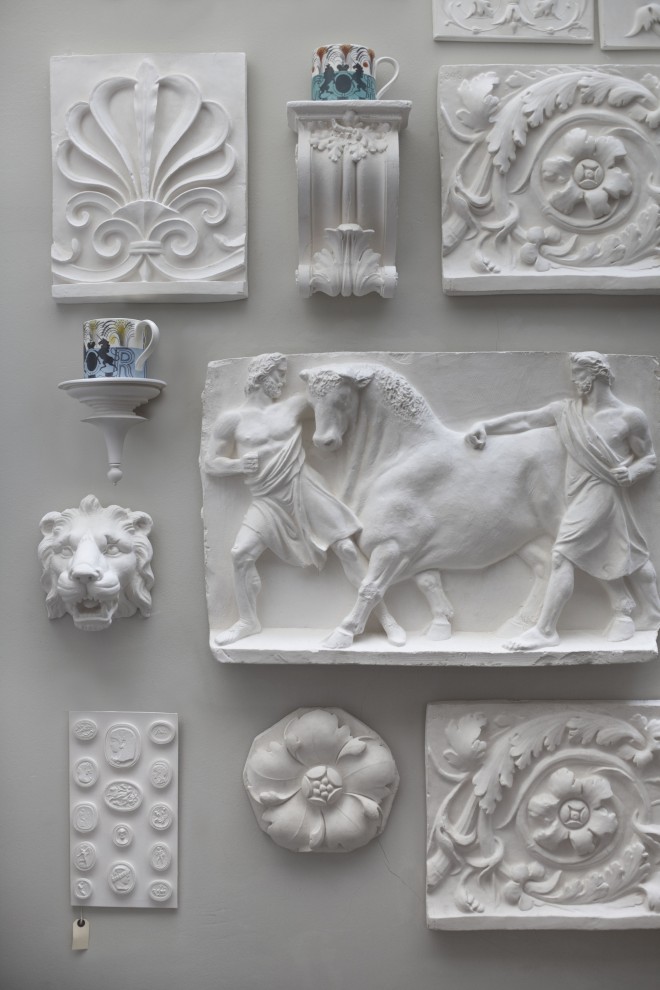 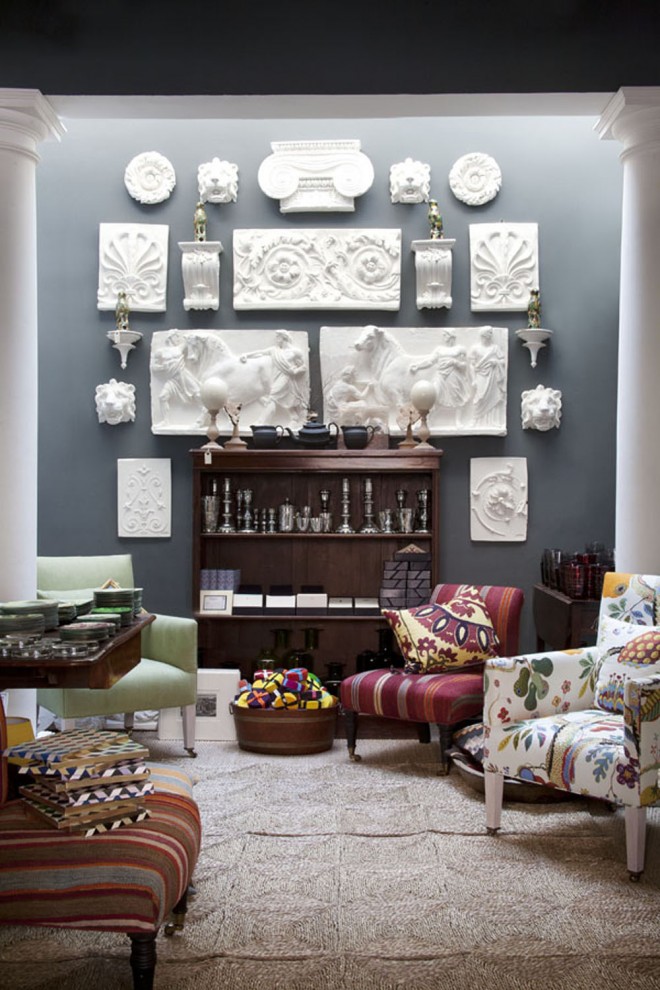 If you would like any more information on Peter or have a serious interest in commissioning a series of plaster works then please do contact us.